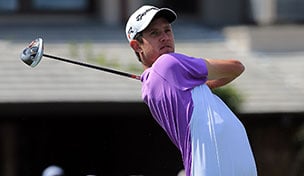 A 14-year-old will tee it up at the Masters, which figures to obscure every other amateur achievement next week. Surprisingly, that sits well with Steven Fox, the reigning U.S. Amateur champion, who most years would assume a starring role among the Crow’s Nest contingent. Instead, he likely will be relegated to chaperone duty.

Last week, the senior at the University of Tennessee-Chattanooga finished second in his last regular-season start, held at Reunion Golf and Country Club in Madison, Miss. (The hallowed grounds of Augusta National, it is not.) But a few weeks from graduation, Fox is primed to begin a crash course in major-championship golf, and only the world will be watching.

That’s a scary proposition for any amateur, but especially for a player undergoing a swing change. After eight years Fox changed instructors this winter, moving to Brad Rose, the swing coach to PGA Tour winner Scott Stallings. Fox said he was “perfectly fine making the switch,” which has helped lower his hands at impact, and that now he has “complete trust with Brad.”

Still, it hasn’t been a seamless transition for Fox, who for the first time arrives at college events as the man to beat. But with expectations mounting, and his game suffering, he recently tapped out a note on his iPhone and saved it to his background.

The message reads: Believe in yourself. Have faith in your abilities. Without a humble but reasonable confidence in your own powers, you cannot be successful or happy.

Each start is scrutinized now, his name essentially boldfaced on any entry list.

Such is life for the reigning U.S. Amateur champion – especially one who triumphed in such dramatic fashion.

At the beginning of that magical week in August, Fox merely hoped to reach the match-play portion at Cherry Hills. That itself proved a challenge, as he needed to survive a 17-for-14 playoff after stroke play.

But Fox, of Hendersonville, Tenn., grew more confident and comfortable as the week wore on, defeating the top-ranked amateur in the world, Chris Williams, as well as Cal standout Brandon Hagy.

Then, in the 36-hole final, against Hagy’s teammate, Michael Weaver, Fox erased a 2-down deficit with two holes to play, then made birdie on the first extra hole to win.

So, yes, you can forgive his teammates for keeping the U.S. Amateur in the daily conversation. They have nicknamed Fox “champ.”

In February, at the Bayou City Collegiate Championship, the starter glanced at the pairings sheet, asked another volunteer why one name sounded so familiar, and then, right there on the first tee, gave Fox the only introduction of the week: The reigning U.S. Amateur champion, Steven Fox! He eventually tied for 18th.

“The players want to beat you so bad, and you obviously don’t want to see that,” said Fox, who had just three top 10s in eight starts this season. “There’s just a feeling that you have to play well all the time. I tried to deny it but there definitely is. I have to get rid of that.”

Fox’s expectations for the Masters are modest, at best. In fact, he’s more looking forward to the Par 3 Contest than the tournament proper. The strongest part of his game is his wedges.

“People say that if you win the Par 3, you won’t win the big one,” he said. “But I’m perfectly fine with winning the Par 3, trust me.”

Already he has lined up practice rounds with Brian Gay and Phil Mickelson, whom he met at Torrey Pines. He’s been working feverishly to set up a round with Brandt Snedeker, another Tennessee kid.

This will mark Fox’s first trip to Augusta since 2010, when as a Chattanooga freshman he received a Monday practice-round badge. Fox watched Tiger Woods hit a few shots, and he toured the grounds, and he snapped dozens of pictures.

Back then, a return visit seemed unlikely for Fox, but so, too, did the prospect of a 14-year-old between the ropes. No matter what happens next week, Fox relishes his role in a historic amateur class.

“All junior players, that’s their dream to play there,” he said. “I get to live it now. That’s pretty cool.”