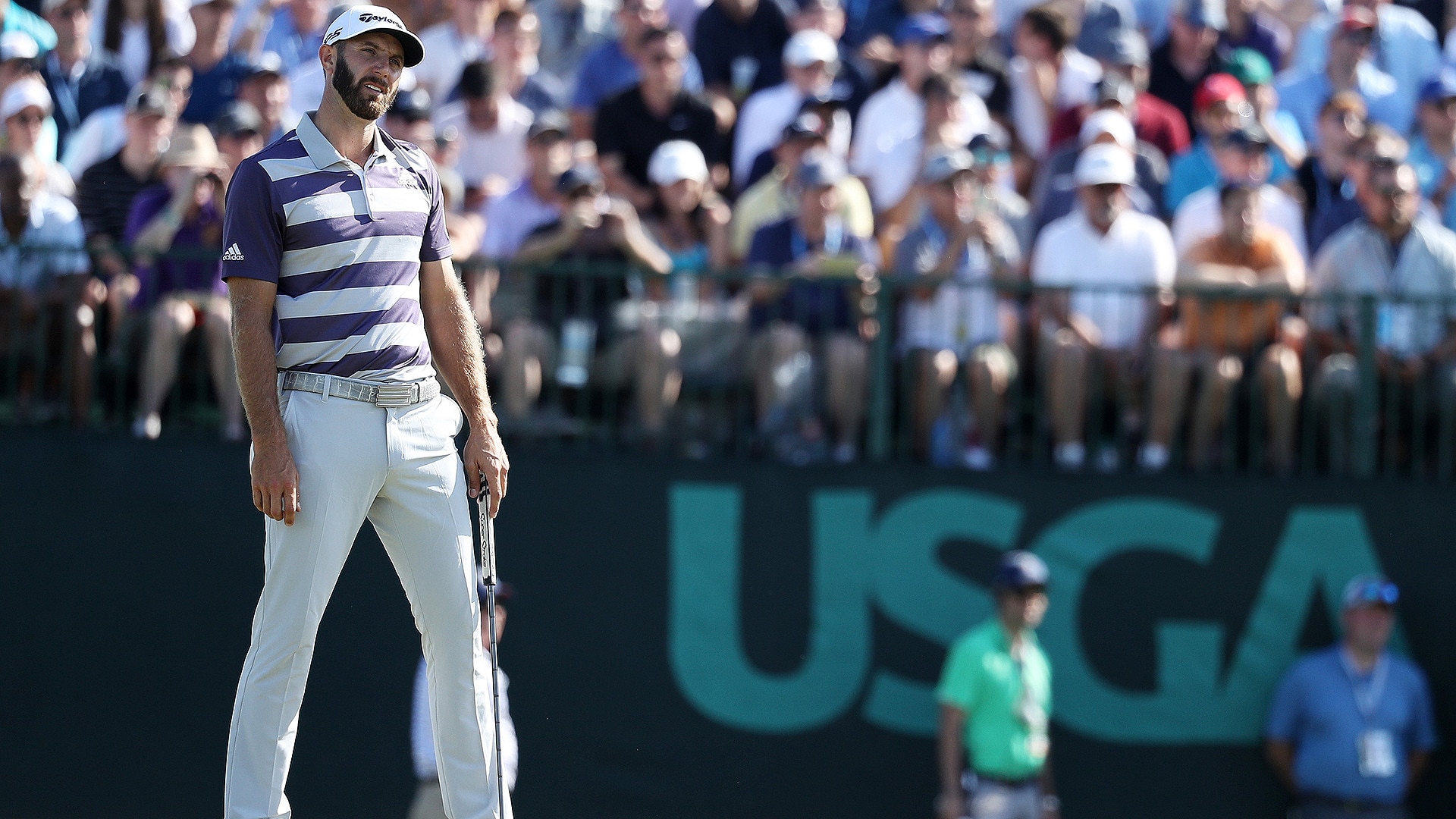 SOUTHAMPTON, N.Y. – By the time Dustin Johnson finished his round at sunbaked Shinnecock Hills, only seven women remained on the back patio of the clubhouse. As Johnson staggered toward the scoring area, the group cheered lustily and awkwardly, apparently oblivious to the carnage of the past seven hours.

“That was miserable,” Johnson grumbled.

Not even the best player on the planet could survive a day of wild bounces, wicked pins and typical U.S. Open wailing.

In what has become a familiar post-round scene at the year’s second major, players marked all of the usual buzzwords on their U.S. Open Bingo cards.

Pick your favorite course descriptor, because they were all in play Saturday as the combination of a parched course and Johnson’s third-round 77 descended the year’s second major into chaos.

“I don’t feel like I played that badly at all,” he shrugged afterward. “Seven over is usually a terrible score, but with how the greens got this afternoon, it was very, very difficult.”

With a bogey on the last, Johnson tumbled into a four-way tie for the lead with Daniel Berger, Tony Finau and reigning U.S. Open champion Brooks Koepka. They sit at 3-over 213, just the fourth time in the past half century that the 54-hole leaders were over par.

Johnson entered the third round with a four-stroke lead. Now the Open is as wide open as ever, with 15 players at or within four shots.

The scoring average Saturday was 75.3, lower than Round 1 here and no doubt aided by the more receptive conditions in the morning. The overall damage was nowhere near as ugly as the infamous Sunday here in 2004, when the scoring average was 78.7 and no one broke par, but this day still left players searching for comparisons.

Indeed, the difference between the morning and afternoon conditions were stark, as the moisture got sucked out of the greens by a warm sun and consistent 20-mph wind.

Berger and Finau barely made the cut, playing their first two rounds in 7 over. Teeing off five hours before the final round, 11 shots off the lead, they each carded 66s to match the low round of the week. Berger struck an ominous tone after signing his card.

“I think it’s going to be extremely difficult later,” he said. “To get out there early and play a good round really was to my benefit.”

And sure enough, for the rest of the day, drives that were slightly off-line kicked into the hay. Approach shots into the firm greens rolled off the shaved banks. Putts bounced and skidded on the glassy, bumpy greens.

Had those 66s been shot in the afternoon?

“That would have been the best round of golf anyone has ever seen,” Koepka said.

The conditions were so treacherous that Shinnecock president Brett Pickett issued a statement through the USGA, saying that he has “no concerns whatsoever” and that the “course has been and remains totally healthy.” An hour later, USGA setup man Mike Davis entered the media center to offer a mea culpa.

“We felt good about the setup when we left this morning,” he said, “but now that I’m sitting here, we would say that parts of these tests of golf were too tough.”

Davis said his message to the grounds staff was loud and clear Saturday night – slow down the course with water – and it’s reasonable to believe that scoring will be markedly better on Sunday.

Too bad the damage to this championship has already been done, as what had been a strong examination of skill turned into a game of chance.

“I’m trying to choose my words carefully here,” said Ian Poulter, who shot 76, “but there’s a fine line between hard and over the edge. From a playability standpoint, when it gets to the edge and goes over, then the pars feel like birdies and the bogeys feel like pars. It’s just hard. It’s brutal.”

The USGA’s miscalculation made world-class players look like amateurs and punished those who entered the weekend with a better score.

The last seven groups – the players who had performed the best over the first two days – were a combined 97 over par.

Scott Piercy, playing in the final group, carded a birdie-less 79.

“We wouldn’t be here tonight if we didn’t feel like, late in the day, things got away from us,” Davis said, “and they did.”

That’s probably little solace to Johnson, of course, who watched his two rounds of sublime play disappear over the course of four frustrating hours.

Johnson didn’t have a double bogey or a three-putt over the first two rounds. He accomplished both by the second hole Saturday, eventually taking 38 putts in all.

“I felt like I played pretty well,” he said.

For the first two days, the beleaguered USGA setup crew had been applauded for providing a stern but fair test. By Saturday night, the cheers had been replaced by the usual chorus of complaints.

“Be careful what you wish for,” Rose said. “We’ve all been asking for a real U.S. Open again. I guess we got one this week.”