U.S. players ready to spread Olympic spirit to those missing out KAWAGOE, Japan – In 2016, it was Rickie Fowler who left Rio flying the Olympic flag and telling anyone who would listen that golf belonged in the Summer Games.

Fowler’s wasn’t the only voice (or tattoo) singing the Olympic praises, but it was the loudest. Flash ahead to the pandemic-delayed encore on Sunday at Kasumigaseki Country Club, where Xander Schauffele held on for a nervy victory and the world was treated to the first ever 7-for-1 bronze-medal match, Fowler’s theme hasn’t changed – but he now has plenty of company.

“One of the best experiences of your life,” said Colin Morikawa, who was on the wrong end of that 7-for-1 playoff. “What today brought out of me was more than just playing for myself, I was playing for our country and I was able to fight and dig deep.”

In the weeks that followed Justin Rose’s victory in Rio, many of those who had dismissed golf in the Olympics were converted by Fowler’s passion and the dramatic finish. It’ll be a similar outcome over the next few weeks as Olympians return to the weekly grind of PGA Tour life.

For those who skipped the Tokyo Games for whatever reason – from COVID-19 concerns and travel restrictions to poor timing and logistic issues – the next few weeks promise to be a polite version of, “I told you so.”

“To anyone that has second thoughts or doubts about whether golf should be in the Olympics or whether they should go and play to represent their country, they absolutely should because the Olympics reaches a wider audience than anything,” Morikawa said. “Whether this grows the game substantially or not, we're doing our part to putting golf on the world stage and to see other athletes this is their pinnacle.”

In the not-so-distant future, players will face another choice when the Summer Games are played in Paris in 2024. Assuming COVID-19 is no longer an issue, players will still feel the pressure of playing the Games during a busy stretch of the Tour season and the logistic concerns of another venue (Le Golf National) that’s separated from the Olympic Village by a lengthy commute.

For those on the Olympic fence, how will the likes of Morikawa and Justin Thomas try to convince them that it’s worth the effort?

“It was cooler than I thought it was. I'm more proud of being here than I thought I would be,” Justin Thomas said. “The first, like, day or two I immediately found out that this is the coolest thing I've ever been a part of. The Ryder Cup is cool, the Presidents Cup's cool, but this is just so different.” 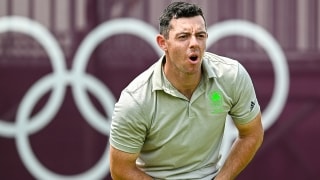 Monday Scramble: Olympics changes some minds; should the format change, too?

The Olympics won over Rory McIlroy, but there are still questions about the event's format. Here's a look at a simple fix.

There was no more high-profile convert last week than Rory McIlroy. The Northern Irishman skipped the 2016 Games and didn’t exactly arrive in Japan consumed by the Olympic spirit, but over five days that indifference turned to unfiltered passion.

“I made some comments before that were probably uneducated and impulsive, but coming here experiencing it, seeing, feeling everything that goes on, not just Olympic golf but just the Olympics in general, that sort of Olympic spirit's definitely bitten me and I'm excited how this week's turned out and excited for the future,” said McIlroy, who also came up short in the bronze-medal playoff.

For those who were paying attention, there was also a lesson to be learned. When Jordan Spieth opted out of the 2016 Olympics because of concerns over the Zika virus, he was ranked third in the world and had established himself as an undeniable force of nature with top-5 finishes (including two victories) in four of his previous eight major starts. The thinking was there would always be more Games, more chances to represent his country and play for a medal.

Although he’s emerged from a prolonged slump this season, Spieth failed to qualify for this year’s Olympics.

“Jordan and I were talking about it recently; he figured he’d have plenty of other chances and look how that turned out,” Thomas said. “You just never know.”

The Olympic experience means many things to many people. For Thomas, the Games were a chance to embrace a priority he didn’t even know was important until last week, while for Patrick Reed, an 11th-hour addition to Team USA when Bryson DeChambeau tested positive for COVID-19, the Olympics were a learning experience.

“The coolest thing here is, you have the best athletes in the world from all different sports, going and experiencing some of those events and to see how they compete and manage their time and their work ethic, it’s awesome to see,” Reed said. “We’re all in this one world that we live in day in and day out and the way we do things in golf is different than what they do in other sports. To see how they do things and watch the best is unbelievable.”

There are those who contend that if the Olympics isn’t the pinnacle of your sport then your sport doesn’t belong in the Olympics, but that take mistakenly ignores the key distinctions between the Games and golf’s major championship.

“I grew up watching the Ryder Cup, the Presidents Cup, the majors, and never grew up watching this, so no one was ever able to relay or say how it felt being an Olympian, especially a golfer,” Thomas said. “I was never hitting putts as an 8-, 10-year-old on the putting green to win the Olympics and win a gold medal. When you don't have the ability to dream something, when you get here it can sometimes just take you by surprise and this definitely exceeded that.”

That dream will be passed on over the coming weeks and this time it’s not just Fowler flying the Olympic flag.