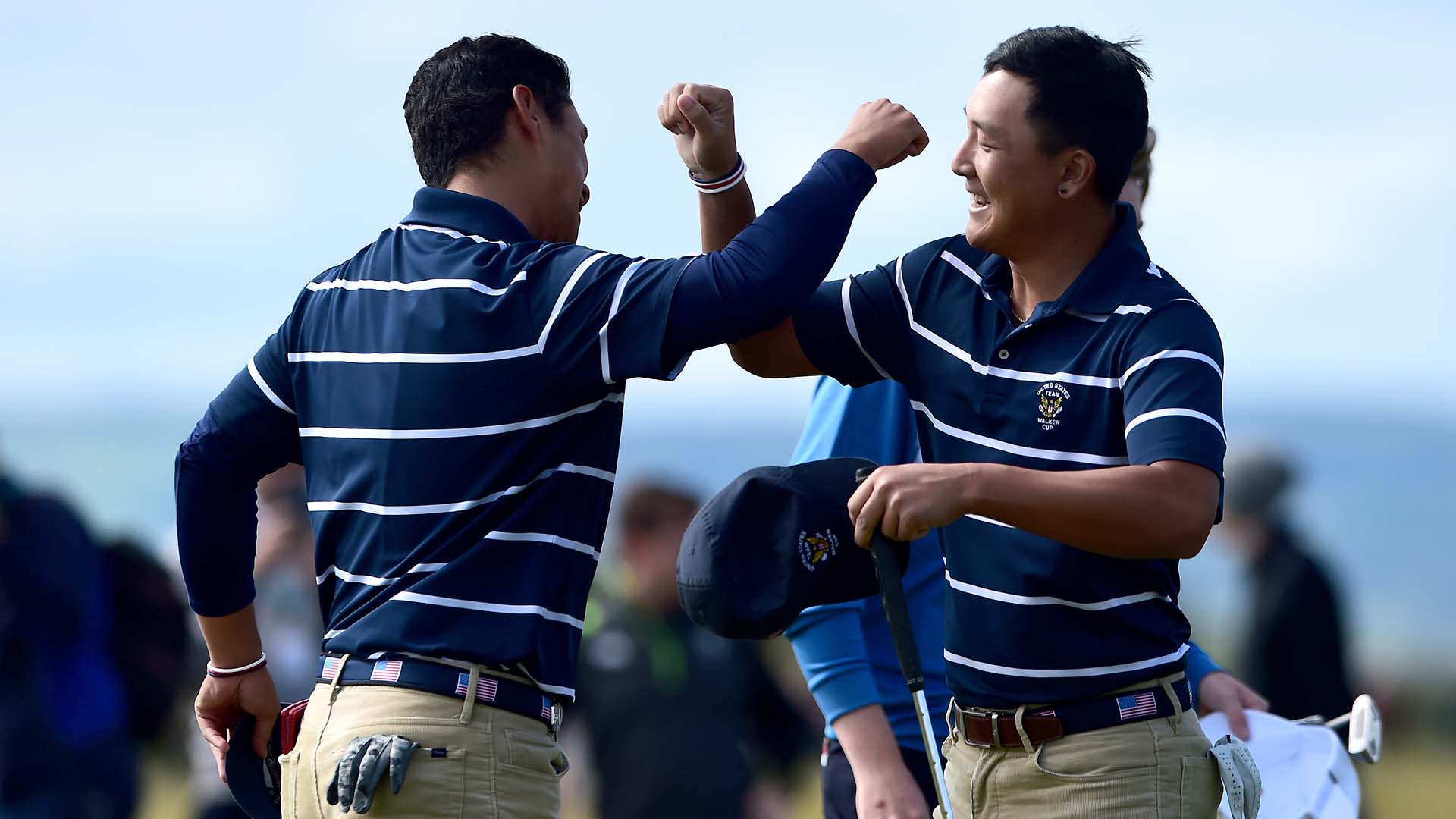 HOYLAKE, England – It was a nightmare start Saturday morning for the U.S. Walker Cup team. Luckily for the visiting side, the finish was much better.

Andy Ogletree, out first in foursomes with fellow U.S. Amateur finalist John Augenstein, hit his approach shot out of bounds on Royal Liverpool’s first hole, and Great Britain and Ireland jumped on their counterparts early, leading in each of the first three matches at one point on the front nine.

But the Americans clawed their way back and ultimately earned a 2-2 tie after the opening foursomes session. The result was huge, especially considering just one team in the past 11 Walker Cups has lost the first session and gone on to win.

“We got off to a bad start,” U.S. captain Nathaniel Crosby said. “… We were a little nervous, a little slow out of the paddock, but we hung there and gotta feel pretty good from where we were a couple of hours ago.”

The Americans couldn’t have drawn up better weather. After days of blustery conditions, there was little wind and the jackets came off early. The scoring, however, still wasn’t easy.

Pars won holes with frequency. Alex Fitzpatrick and Conor Purcell took four holes against Augenstein and Ogletree with pars. Of course, early 15-foot birdie makes by Purcell on Nos. 2 and 3 gave the GB&I’s standout pairing a nice cushion, and the Americans were constantly hacking out of the rough.

“We stuck to our strategy quite well,” Purcell said. “Starting with the third hole, they took driver and hit it in the rough and I was sure that we’d make a 4 by hitting iron off the tee. I think there are some holes where you need to be careful out here. We planned our way around quite well.”

The bright spot for the U.S. was the duo of John Pak and Isaiah Salinda. Despite growing up on opposite coasts – Pak in Scotch Plains, N.J., and Salinda in San Francisco – their fun-loving personalities have meshed well this week. They survived three birdies by Sandy Scott and Euan Walker and sat just 1 down after six holes. After the GB&I players made a mess of the par-4 ninth, the Americans took their first lead of the match.

Four holes later they were 3 up, eventually ending the match – like the other three games – on the penultimate hole.

“You can see us smiling out there, trying to enjoy ourselves, because that’s when we both play our best golf,” Pak said.

Both teams feel like their worst golf is behind them, though the Americans, who were admittedly nervous at the start, seem to be more confident heading into Saturday afternoon’s singles session.

Not only does a 2-2 tie feel like a small victory – the U.S. also split foursomes matches in 2017 and 2007, winning it all both times – but the U.S. also did it without the top-ranked amateur in the world.

Cole Hammer sat the first session, though is expected to play the rest of the way beginning with the opening singles match, where he will take on Fitzpatrick.

“Cole is champing at the bit,” Crosby said. “He’s mad at me; so is Steven [Fisk]. I think their chances of winning this afternoon are pretty high because they’re foaming at the mouth right now.”