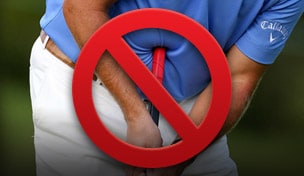 Getty Images
VIRGINIA WATER, ENGLAND - MAY 21: Oliver Wilson of England plays a bunker shot during the second round of the BMW PGA Championship on the West Course at Wentworth on May 21, 2010 in Virginia Water, England. (Photo by Ian Walton/Getty Images)  -

After an extensive and sometimes contentious comment period, the USGA and R&A formally announced a ban Tuesday on the anchored stroke.

Rule 14-1b will take effect on Jan. 1, 2016, when the next edition of the Rules of Golf is published. After the rule was initially proposed on Nov. 28, 2012, the governing bodies opened a 90-day comment window that allowed industry leaders to address any lingering concerns.

When first announcing the proposed rule, the governing bodies cited a “tremendous spike in usage” and “growing advocacy” among pros and instructors. Though long putters have been around for decades, USGA executive director Mike Davis said in November that the percentage of players who have used the putters has increased from about 2-4 percent in the 1980s and ’90s to close to 20 percent.

However, according to USGA president Glen D. Nager, recent surveys now indicate that anchoring is used by only 2-4 percent of golfers in the U.S. and Europe.

This ban will affect the estimated 18 percent of PGA Tour players who anchor their putters, including four of the last six major winners (Keegan Bradley, Webb Simpson, Ernie Els and Adam Scott).

It’s important to note that the new rule still allows those players to use their long or belly putters, so long as the butt of the handle is not affixed to a part of the body (stomach, sternum, chin, etc.).

“The new rule upholds the essential nature of the traditional method of stroke and eliminates the possible advantage that anchoring provides, ensuring that players of all skill levels face the same challenge inherent in the game of golf,” Nager said.

During Tuesday’s announcement, the governing bodies jointly released a 40-page document that explained their decision to adopt the rule.

• The new rule should not negatively affect participation

Said R&A chief executive Peter Dawson: “We recognize this has been a divisive issue but after thorough consideration, we remain convinced that this is the right decision for golf.”

Now, the PGA Tour must decide if it agrees.

In February, commissioner Tim Finchem announced the Tour’s opposition to the then-proposed rule, saying that the ban was not in “the best interest of golf or the PGA Tour.” (The European Tour, LPGA, Ladies European Tour and Sunshine Tour each publicly supported the ban, furthering the notion that the issue was more controversial in the States than it was overseas.)

At the time, Finchem stopped short of suggesting that the Tour would break from the Rules of Golf and create its own set of rules. Now that the anchoring ban has been passed, it was not immediately clear which direction the Tour would take.

In a statement after the announcement, the PGA Tour said the Player Advisory Council and Policy Board would meet in the coming month to discuss their next step.

“We will announce our position regarding the application of Rule 14-1b to our competitions upon conclusion of our process and we will have no further comment until that time,” the Tour said.

PGA of America president Ted Bishop has been perhaps the most vocal dissenter. In March, he warned that the ban could result in separate rules for amateurs and professionals. “Bifurcation seems destined if Rule 14-1b is implemented,” he said.

In their 40-page report, the USGA and R&A stressed the need for one set of rules for the “future health of the game.”

“If there was some type of schism, we don’t think that’d be good for golf,” Davis said Tuesday. “We are doing what we think is right for the long-term benefit of the game for all golfers.”

Some players have hinted at potential legal action if the ban was passed. Tim Clark, for example, has used a long putter since college because of a congenital problem with his arms in which he can’t supinate his wrists.

“In the event that any litigation is brought, we’ll respond to whatever the claims are,” Nager said. “But I can assure you of this, we have looked at this from the legal perspective and feel confident of our position.”