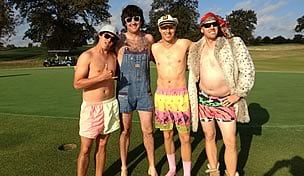 JUNO BEACH, Fla. – The long-awaited second music video from the Golf Boys (OK, maybe it was just GolfChannel.com who was waiting for it) was released on Monday via YouTube and iTunes.

Proceeds from the video, which can be purchased on iTunes, will go to charity: water, which builds clean water wells in Ethiopia.

“I’ve been able to show fans a different side of myself and other pro golfers,” said Crane, who released the original Golf Boys video (“Oh, oh, oh”) in June 2011. “I’m a golfer, first and foremost, but spending one day every few months to create a video that raises money for charity and might grow the game is too good of an opportunity to pass up.”

Before he teed for his afternoon round at Monday’s Seminole Pro-Member, Crane said the video has been ready for a few weeks but there was a glitch with iTunes that caused a delay.

As for whether there is a third video in the making, Crane winced, “You have no idea how much goes into these videos,” he smiled. “It takes days, not hours.”