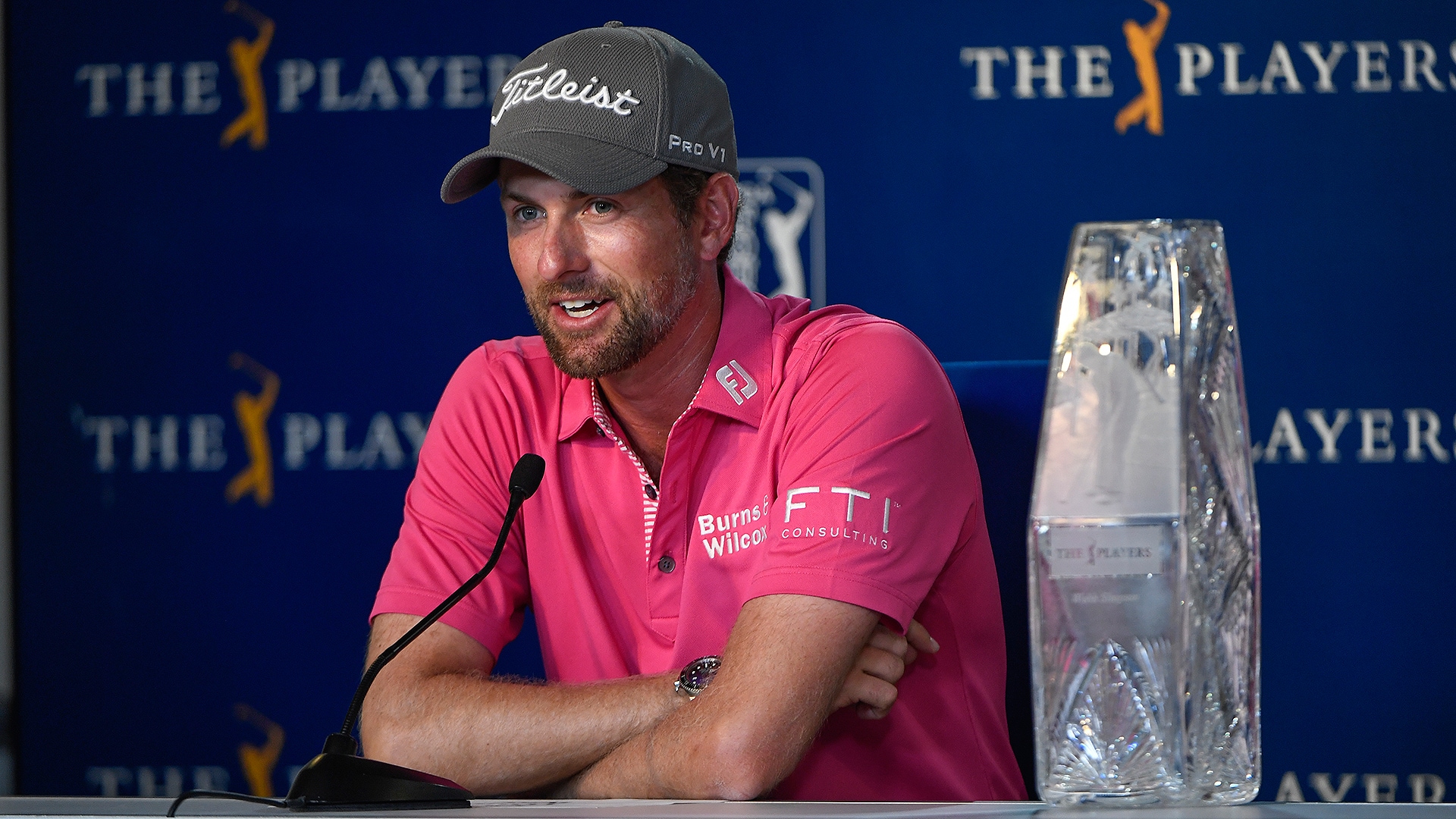 PONTE VEDRA BEACH, Fla. – Nine days ago, at a French restaurant in Charlotte, Debbie and Webb Simpson sat down for a much-needed dinner date.

A mother of six, it’s rare for Debbie to get some quality 1-on-1 time with her children, but especially Webb. He’s always on the road, and he’s busy with his own family, with a wife and four kids all under the age of 7. But that night, they talked for hours, laughing and crying and grieving together.

It’d been nearly six months since Sam Simpson passed away after a long, cruel, heartbreaking battle with Lewy Body Dementia.

“We just miss him so much. No one ever prepared me to watch my children grieve, but particularly Webb. He has struggled more than I thought he would. Just sharing that night together last week was so cathartic. It was a night for me to remember.”

And perhaps it was a turning point for Webb.

He has been in touch even more than usual, wanting to make sure that she’s OK, that she’s taken care of. He called each morning this week, and she texted him a Bible verse after each of his low rounds. Simpson juggled so many thoughts Sunday at The Players – his revamped putting stroke, his winless drought, his massive lead, his challengers that included both Tiger Woods and Jason Day – and yet throughout he couldn’t stop thinking about Debbie.

“I wanted to do this for my mom,” he said after his four-shot victory. “This is for her.”

“I’ll never stop replaying it in my head,” she said. “This is for my mom. That’s a mother’s dream to hear.”

Here at TPC Sawgrass, Simpson completed the rare parental double: He won his 2012 U.S. Open title on Father’s Day, before Sam’s health began to significantly deteriorate, and then he won this Players the last time it’ll be played on Mother’s Day.

“This one is extra emotional and special for the family,” said Simpson’s wife, Dowd.

The victory might be felt even more resoundingly seven hours away, in Raleigh.

Ted Kiegiel has been a constant presence in Simpson’s life ever since he began working with him nearly 25 years ago. Webb was just 8 then, but after their first lesson Kiegiel wrote Debbie and Sam a handwritten letter: Your son is incredible. I’ve never seen another talent like him.

For years, Sam tried to downplay Webb’s ability – not because he didn’t believe in him, but because he didn’t want to place unrealistic expectations on his son. Even as Webb won 20 to 30 tournaments a year, Sam always told Kiegiel that he just wanted him to be a solid amateur.

“That’s not happening,” Kiegiel would tell him. “He’s headed to the PGA Tour.”

Sam might not have understood the mechanics of the swing, but he tried to impart invaluable life lessons – how to lose graciously, how to dig deep. Simpson didn’t need to do much soul-searching during his near-flawless week here, but on Friday, after rinsing his tee shot on 17 to squander a course-record round, his father’s words still rang in his ear. Keep fighting. Do your best. So he scrambled for par on 18 and polished off a 63.

“He was still helping me through it and mentoring me,” Simpson said.

There was no easy way to say goodbye last fall. With Sam’s health declining in November, Webb withdrew after two rounds at Sea Island to be by his side in hospice care. For more than a week, 20 to 30 friends filled his room, sharing their favorite funny tales about Sam and how he enriched their lives.

She had met Sam as a freshman at Wake Forest. Sam spotted a beautiful blonde from across the room, and he said that if she took out his son, an incoming freshman, he’d give her $100.

But Sam kept his word, forking over the $100, which they used to pay for dinner at Ryan’s Steakhouse. They’ve been together ever since.

“His dad was his best friend, so it was like losing your best friend and your father and your mentor,” Dowd said. “They had such a good relationship I feel like there weren’t any words left unspoken. There was just a longing for more time with him.”

But from his grief Simpson has found comfort. He tied for fourth in his first start of the year. Then he had other chances to win in Palm Beach and Tampa and Hilton Head, all top-10s. Recently, caddie Paul Tesori noticed a change in his boss’ demeanor.

“He was a great golfer at a young age. He got the pretty girl when he was 19. He got married at 23. He’d never really gone through any struggles in his life,” Tesori said. “The putting ban was the first one, and losing his dad was the next one. I see a different Webb walking around the golf course now. He’s walking taller. He’s wiser. I see a different man right now.”

Kiegiel pointed to the impact of losing Sam.

“If anything, it’s been a greater motivating factor for Webb,” he said. “He finds strength in it.”

They talk often about how Simpson is 32 years old, squarely in the prime of his career, and that it’s time to capitalize. That conversation would have seemed forced a year ago, with Simpson’s world ranking plummeting and his putting so shaky that Tesori thought Simpson would never putt well again.

But a year ago, Simpson found a spark here at TPC Sawgrass. On the eve of the tournament, he stumbled into Tim Clark, another anchorer forced to change his methods, and began messing around with the claw grip. He put it in play, without any practice, and tied for 16th. Over the rest of the season, he climbed more than 100 spots in the ranking.

“I’m very thankful that he gave me that lesson,” Simpson said.

Through countless hours on the practice putting green, he has honed his new method – the “Kuchar-claw,” with the putter shaft pinned against his left forearm and his right hand in a claw grip – and resurrected his career. He’s now a top-10 putter on Tour, and he figures to rise considerably after his sublime week on the greens here.

Over the first two rounds he had his 10th- and fifth-best putting rounds of his career. By Saturday night he had already holed 356 feet worth of putts, gaining more than nine shots on the field. He was far from perfect on Sunday, but he also didn’t need to be, never leading by fewer than four shots.

It was his fifth Tour victory, and first since 2013.

“Today is meant to be for him,” Kiegiel said. “Winning on Mother’s Day, with what a family man he is, the recent loss of Pop – so many things have come together today for it to be this day, this week, this year, at this place.”

Back in Raleigh, Debbie’s throat was raspy, and she was passing around Kleenex, and she was still chuckling that her 10-month-old grandson clapped after each of Webb’s good shots on TV. Her heart was as full as it’s been in months.

“It’s just incredible,” she said, readying to leave for a family celebration. “God’s timing has been so sweet.”