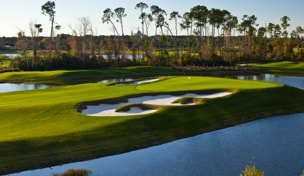 We can assume Tiger Woods' favorite course in Orlando: Bay Hill, where he'll go for his 8th Arnold Palmer Invitational victory in 2013.

So what about the rest of us? We've dug into GolfNow.com's golfer ratings to uncover the best golf courses around central Florida as rated by the players who pay to play them.

1. Bella Collina Country Club (4.69/5.0): Central Florida golfers are flocking to Bella Collina, a once private facility that now offers some public play at their facility. most reviews make note of a clubhouse rich in opulence, plus a golf course in pristine shape -- but tough with loads of sand.

7. North, South East at Grand Cypress (4.56/5.0): Another top course near the theme parks is this 27-hole facility designed by Jack Nicklaus. Raters appreciate the location near Disney and also a stern Nicklaus-worthy test.

9. El Campeon at Mission Hills Resort (4.54/5.0): Head for the hills to play this 1920s classic in Howey in the Hills, located just northwest of Orlando. Rolling fairways and Golden Era architecture accentuate the peaceful vibe of this shady resort that's far removed from the tourist bustle just south on the Turnpike. More on El Campeon.

10. Eagle Creek Golf Club (4.47/5.0): This Orlando Airport-area course prides itself on great service and greens, and appears to be delivering. It's one of the most-reviewed courses in the area, and golfers are mostly flush with praise for this Scottish-inspired layout with big, sweeping greens and firm, fast conditions.