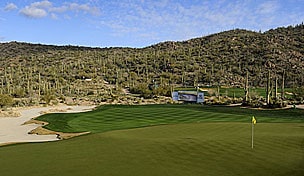 A marathon day at the WGC-Accenture Match Play Championship whittled the field from 16 to eight Saturday morning, and the field was further pared in the afternoon session. See which players are still standing heading into the final day of competition at Dove Mountain:

(6) Matt Kuchar def. (9) Robert Garrigus, 3 and 2: After not trailing at any point in his first three matches, Garrigus found himself in an early hole against Kuchar. The reigning Players champion won the first hole and two of the first three, leading throughout the entire match. Garrigus, who reportedly was battling wrist discomfort during the match, made three bogeys and a double bogey across his first 11 holes as Kuchar built a 4-up lead on the back nine. Garrigus trimmed his deficit to 2-down but could get no closer, as Kuchar has now advanced to the semifinals without playing the 18th hole in any match.

(3) Ian Poulter def. (4) Steve Stricker, 3 and 2: The Englishman was not willing to give any birthday gifts to Stricker, who turned 46 Saturday, closing out the 2001 WGC-Match Play champion thanks to some stellar putting. Poulter, who is now 19-3-2 in match play format since 2010, made three birdies and an eagle on the front nine en route to amassing a 3-up lead at the turn. Stricker cut the lead to 2-up after the 10th, but Poulter won each of the next two holes to re-build a comfortable advantage. A hero at last year's Ryder Cup, Poulter will now advance to Sunday's semifinals, seeking his second title at Dove Mountain in the last four years.

(11) Jason Day def. (5) Graeme McDowell, 1 up: The youngest player in the field this week, the 25-year-old Day was able to close out the former U.S. Open champion in a hard-fought match. McDowell won the first hole and maintained that advantage through the first six holes, but Day was able to equalize and grab a lead of his own on the 11th. The match was squared heading into the 17th hole, but an errant approach left McDowell unable to save par, and the Aussie closed out the match with a par on the home hole.

(6) Hunter Mahan def. (4) Webb Simpson, 1 up: Mahan kept alive his bid for back-to-back titles, narrowly escaping the reigning U.S. Open champion during a match in which neither held more than a 1-up lead. Simpson, in fact, never led, as Mahan took 1-up leads after the fifth and 10th holes, both of which were equalized. When both players hit into a greenside bunker on the par-3 16th, though, only Mahan was able to save par, grabbing a lead that he would not again surrender. He heads into a semifinal match with Day, looking to become the first back-to-back champion in this event since Tiger Woods in 2003-2004.