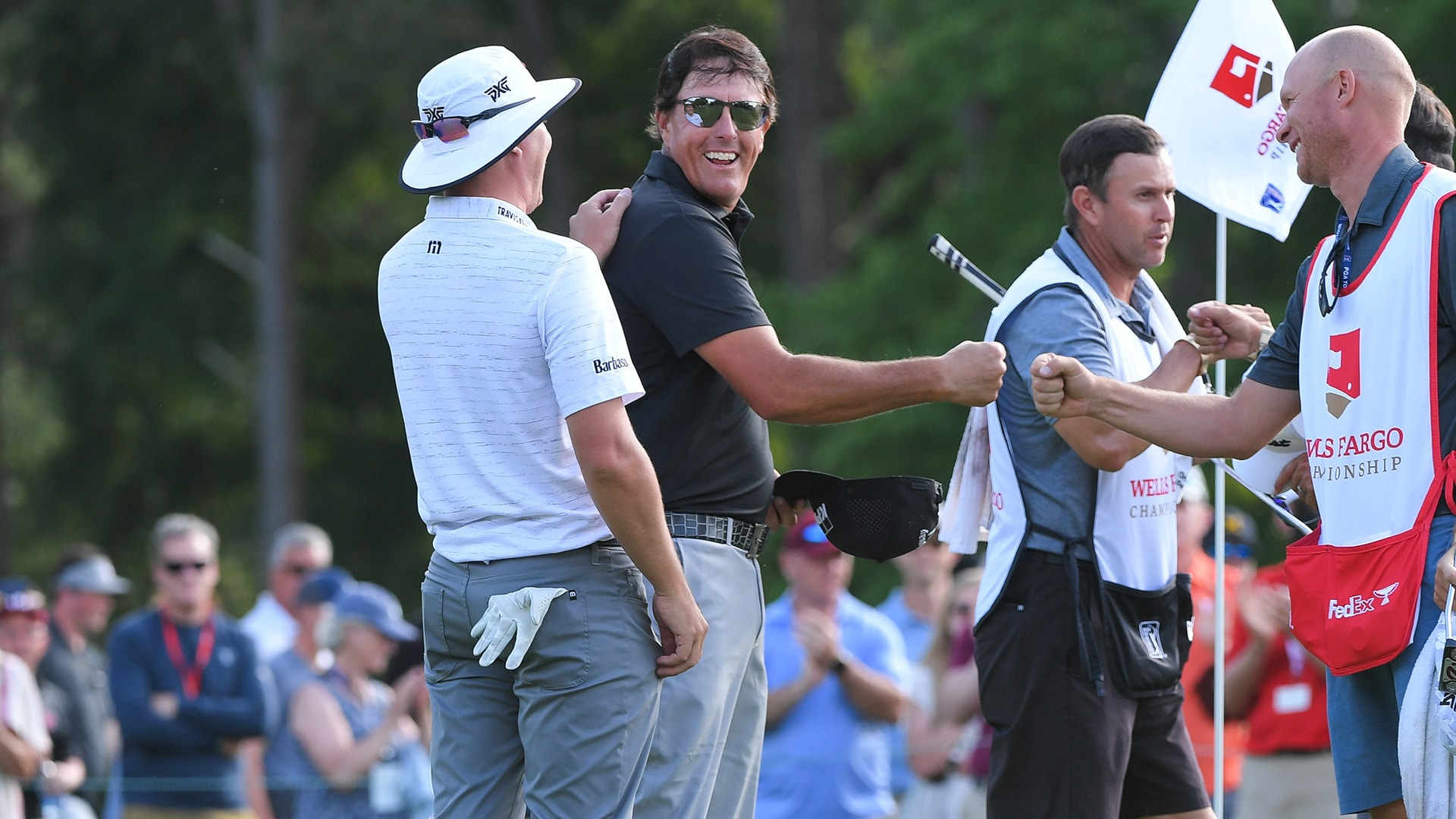 CHARLOTTE, N.C. – Joel Dahmen, arguably the PGA Tour’s most underrated funnyman, had never been paired with Phil Mickelson before Thursday’s opening round. So, on the eve of the big round, the jolly 33-year-old took to Twitter.

“Tomorrow I get to check off another bucket list item by playing with [Phil Mickelson]. I’ve been trying to get a game with him for six months, but I think he’s scared of my hellacious seeds,” Dahmen thumbed.

Never one to sit out a social-media scuffle, Lefty fired back: “Words cannot express my excitement and jubilation to finally be paired with Joel “DaMan” Dahmen. [Bombs] will be hit and [birdies] will be made. It’s about to rain again in Charlotte.”

Dahmen offered a tepid comeback, something about the PGA Tour Champions and professional golf’s version of “OK, boomer,” but on this day it was the AARP member earning the walk-off.

Following an all-too-familiar birdie-bogey start, Lefty was stunningly consistent. Like Tiger Woods consistent before he started missing fairways. There were four more birdies before the turn and a flawless second nine for a 7-under 64 and a spot atop a PGA Tour leaderboard for the first time since 2019.

That’s not too shabby for a distracted fifty-something who has owned recent on-course lapses in concentration and a growing fascination with something called Super League Golf. But on a perfectly spring day at the Wells Fargo Championship there were no slips in concentration, no easily-avoidable mistakes, no real mistakes, actually.

Although he missed four fairways he’s first in the field in strokes gained: tee to green and 10th in greens hit (14 of 18). That’s not a Phil round. Not now, not ever. Yet there he was smiling and laughing and being Phil.

Following a few friendly barbs on the first hole the two settled into a normal Tour routine with Mickelson filling the awkward silences with all manner of stories and anecdotes.

The best tidbit from Day 1 at Quail Hollow Club?

“We got in some dopamine talk, frontal lobe and dopamine, and then the units of it, which I was actually impressed with,” Dahmen said. “Then he hit a 6-iron to 3 feet, so he must have had his dopamine correct on that one.”

Dopamine. You know, normal Phil stuff. But for this version of the 44-time PGA Tour winner there might be something to his know-it-all madness. It’s been that well-documented inability to focus for five hours during rounds that Lefty has said is the issue, not his game. So dopamine, which is described in one Google search as “a big part of our unique human ability to think and plan,” would be a relevant topic.

Phil is always optimistic. Hope is free, after all. But it’s been hard to take him seriously the last few years. Players like Lefty’s good buddy Tom Brady have redefined what aging means for athletes but while the mind and body seem willing Lefty’s game, well, let’s just say it’s been showing more cracks.

But not on Thursday. He was consistent off the tee and dismantled Quail Hollow with his iron game. But mostly what made this Thursday better than any other Thursday since last year’s Travelers Championship was his ability to remain in the present.

“I'm just present on each shot. This course holds my attention,” Mickelson said. “I've been doing some like, you know, some mental exercises and so forth just to try to get my focus to elongate over five hours and so forth.

“That's been a real struggle for me the last few years because physically, there's nothing physically holding me back from playing at a high level, but you cannot make mistakes at this level.”

One player joked with Dahmen as he made his way to scoring that he’d awakened a sleeping giant with his well-intended and entertaining trash talk and having someone he could mentally spar with certainly helped keep Phil focused, but this goes well beyond some friendly back-and-forth.

Despite success on the PGA Tour Champions and a looming fortune waiting if he jumps to the Super League Golf, Phil has been unwilling to give up hope on his second act. At 50 there would certainly be greener pastures waiting on the PGA Tour Champions or even the announcing booth, where he would be a coveted addition if he chooses, but where’s the challenge in any of that?

As Dahmen wrapped up his media obligations Phil walked by and with a sly smile he cracked, “Hope you were paying attention.”

It was funny and it was apropos because “paying attention” has been Phil’s greatest challenge as he begrudgingly enters his golden years. If he can pay attention for three more days, if he can focus like he did on Thursday, he might be able to push back against the twilight for a little while longer.