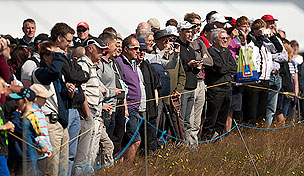 Getty Images
PRATTVILLE, AL - SEPTEMBER 28: Lorena Ochoa reacts after missing a birdie on the ninth hole during final round play in the Navistar LPGA Classic at the Robert Trent Jones Golf Trail at Capitol Hill on September 28, 2008 in Prattville, Alabama. (Photo by Dave Martin/Getty Images)  -

Each week, the GolfChannel.com team offers thoughts on 'what we learned' from the most recent events and news developments. This week, we learned that Royal Lytham & St. Annes will have a slightly different look than we're used to, that Roger Chapman is a bigger stud than he gets credit for being, and at least one member of our staff is jonesing for the British Open.

I learned that this week, more than perhaps any Open Championship in recent memory, driving accuracy will be of utmost importance. A summer that has been especially rainy even by English standards has left Royal Lytham & St. Annes with plentiful rough on either side of its fairways. Keeping the ball in proper position is always essential at the year's third major, but it will be about more than avoiding bunkers and finding precise angles into the greens this week. An ability to keep it in the short stuff may just determine which player is the next to claim the claret jug. – Jason Sobel

I learned Zach Johnson is a legitimate contender for Player of the Year. Johnson is one of four players who have multiple PGA Tour wins in 2012. Tiger Woods, Hunter Mahan and Jason Dufner might have more prominent victories than Johnson, but none of the four has a major. Johnson's as good a bet as any of them to win the British Open or the PGA Championship. – Mercer Baggs

I learned Roger Chapman is a chap in incredible company after coming back to win the U.S. Senior Open on Sunday. By winning the Senior PGA Championship and the U.S. Senior Open in the same year (both in Michigan, by the way), Chapman joined a very small club of 50-plus players to do the same thing. Jack Nicklaus (1991), Gary Player (1988) and Hale Irwin (1998) are the only other players to accomplish the feat. All-time great? Chapman isn't. But being in that company is the next best thing. – Ryan Ballengee

I learned I like the British Open more than I previously believed. Watching the final round of the John Deere Classic, even though it turned into a dogfight down the stretch, to me it was just a dog. I kept daydreaming about my favorite twins, Heather and Gorse. I imagined shots that skitter along the ground like crazed squirrels, stacked-sod bunkers that look perfect for lobbing hand grenades out of, and metal gallery barriers, not nylon ropes. Sorry, John Deere, I'm just not that into you. It's not you, it's me. (OK, it is you, too.) Whatever, bring on the British. Can't wait for Thursday. – Al Tays