What We Learned: WGC-Cadillac Championship 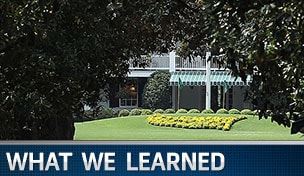 Each week, GolfChannel.com offers thoughts on 'what we learned' from the world of golf. This week, our writers weigh in on the big names on the leaderboard at Doral and the next wave of American golfers on the rise.

The Masters can’t get here soon enough. Five days ago, I was pleased that the PGA Tour was in my home state of Florida. Now, I just want these next four weeks to get over with quickly so we can get to Augusta National. Tiger Woods is on top of the world again (will likely regain the No. 1 ranking after Bay Hill). Phil Mickelson, Keegan Bradley, Adam Scott, Sergio Garcia and company all played well at the WGC-Cadillac Championship, and current world No. 1 Rory McIlroy seems to have found something to rid him of his funk. Wish it was April. – Jay Coffin

The 2013 WGC-Cadillac Championship may be the last vision of Doral’s famed Blue Monster that seems familiar. The golf course will be uprooted in a few weeks for a redesign led by architect Gil Hanse, and although the planned work seems modest enough when Donald Trump is involved you never really know what to expect when the PGA Tour returns to the south Florida staple next year. – Rex Hoggard

Remember when we wondered what was wrong with American golf? What we have now is an embarrassment of riches. And this isn’t just about the top of the world order – Tiger Woods is No. 2, for now, with Brandt Snedeker and Matt Kuchar, Dustin Johnson and Keegan Bradley, Rickie Fowler and Russell Henley all looming.

No, because what about Patrick Cantlay, 20? He won a week ago on the Web.com Tour. What about Peter Uihlein, 23? He showed glimpses of his awesome potential with a T-6 in Puerto Rico, following up a T-4 overseas. And now we welcome Jordan Spieth, 19, to the marquee. A two-time U.S. Junior champion, a former No. 1 amateur in the world, Spieth was tied for the lead down the stretch in Puerto Rico before finishing one shot out of a playoff. What about Luke Guthrie, and Ben Kohles, and Morgan Hoffmann? They're coming, too.

What’s wrong with American golf? Nothing – it's as strong as it has ever been. – Ryan Lavner

The series of World Golf Championship events will never be on level par with the majors – nor should they be. But as these tournaments continue to gain more exposure amongst the lofty second tier, the current record of Tiger Woods will become all the more impressive. Woods now owns 17 career WGC titles, which is two touchdowns and extra points clear of his next closest competitor. In fact, runner-up Geoff Ogilvy would have to win every WGC tourney between now and the end of the 2016 season simply to match Woods' mark. It will never be a mythical, mystical number in the realm of Jack Nicklaus' 18 majors, but his dominance at these events – against all of the world’s best players - can't be understated. – Jason Sobel

Tiger Woods has some pretty valued friendships in the game right now. He has pal Steve Stricker helping his putting stroke, and he has pal Rory McIlroy keeping him young and fully engaged. If Stricker wanted, he could be golf’s most high-priced putting coach. His value this past week was essentially established at $620,000 per lesson. That’s the difference between the first-place money Woods won Sunday and the second-place money Stricker won.

Woods, of course, got an impromptu putting lesson from Stricker before the start of the WGC-Cadillac Championship. Woods won the $1.5 million first-place check with Stricker taking home $880,000 for second place. Woods may be No. 2 in the world, but in McIlroy, he has a gifted young talent at No. 1 who keeps him fully engaged. Jack Nicklaus said this past winter that he believes McIlroy’s emergence could be good for Woods’ game. Even Jack, though, couldn’t have foreseen how good Tiger’s friendship with Stricker could be. – Randall Mell