What's a Tour event with no fans look like? Let the 2012 AT&T National show you 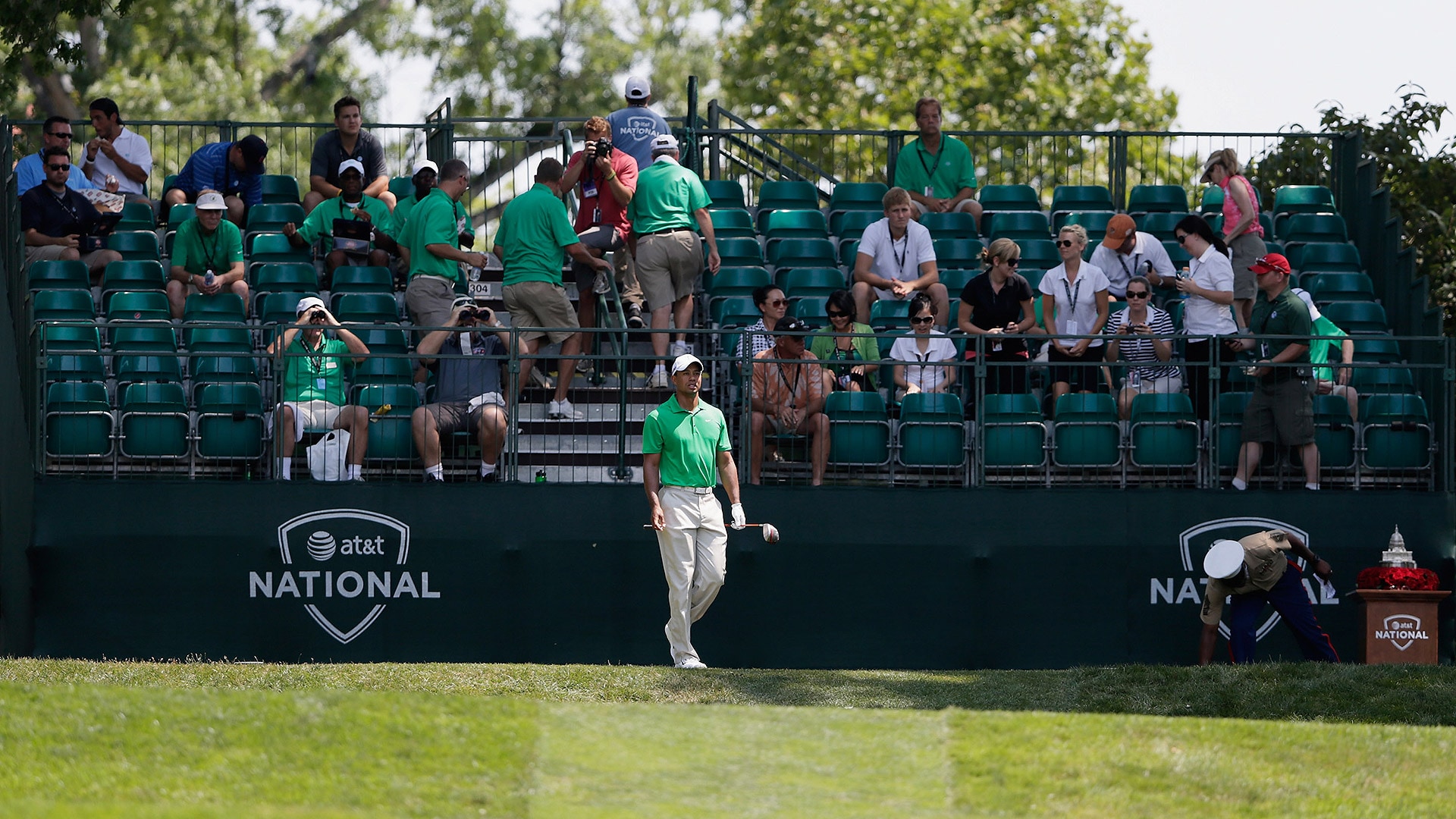 Brendon de Jonge awoke in the middle of the night, drenched in sweat – and not because he was about to play in the final group on the PGA Tour.

Early on June 30, 2012, a derecho blew through the Washington, D.C., area and knocked out the power at de Jonge’s hotel. It was an ominous start to an unforgettable day. With blackouts all over the region and destruction at host venue Congressional Country Club, PGA Tour officials scrambled to keep the tournament on track. Ultimately, they made an unprecedented decision: They would play the third round of the AT&T National, but without spectators.

“The whole experience was a little bit surreal,” de Jonge said this week.

But that bizarre round at Congressional can provide at least a glimpse into the short-term future of the PGA Tour. Targeting a June 11-14 return at the Charles Schwab Challenge in Fort Worth, Texas, the Tour announced that at least the first four events – and potentially many more – are set to be played without fans on property in an attempt to curtail the spread of the coronavirus. A fan-free environment fundamentally alters the experience not just for the golf fans at home (who likely will be watching a scaled-back TV product), but also for the players and caddies competing in the tournament. The future winners at Colonial and Harbour Town will raise trophies in front of empty grandstands and a couple hundred essential personnel. Inside the ropes, they’ll need to generate their own buzz and excitement ... while, most importantly, complying with CDC guidelines regarding social distancing and sanitation practices.

“It will for sure be awkward,” Charles Howell III said, “but if that’s our best and safest way forward, that’s what has to be done.”

The circumstances were markedly different eight years ago, but Greg McLaughlin, the former tournament director of the AT&T National, remembers navigating his own dangerous situation. He remembers driving back to Congressional after dinner and, all of a sudden, seeing stop signs bending in the 80-mph wind. He remembers climbing over four trees blocking the front entrance of the club and hopping into a waiting car. He remembers the early-morning discussions with the maintenance crew about the extensive cleanup efforts that included more than 40 uprooted trees. At first light McLaughlin looked out over the 10th green and couldn’t see grass, only leaves and debris.

Deliberations with Tour officials narrowed to three choices: Cancel the round and finish Monday; attempt to play 36 holes Sunday in 95-degree heat and high humidity; or head off split tees and in threesomes Saturday but ban fans and volunteers from the property. For the first time in Tour history, they announced the latter option, citing safety reasons, with all of the scattered debris outside the ropes.

Anyone with a clubhouse parking pass gained entry, so McLaughlin estimated that 500 to 1,000 people were on-site that day. That was no big deal to someone like de Jonge, who was looking for his first Tour victory and used to toiling in anonymity. Not so for Tiger Woods, the enormously popular tournament host.

“There’s an inherent energy when you’re in the hunt on the weekend and you’re playing with Tiger,” said Bo Van Pelt, who was in Woods’ group that day. “Pulling in, there’s usually a hustle and bustle, an increased energy level, and that was just nonexistent. It was like it was 6:30 on a Monday morning and nobody was there.”

Woods has always played in a fishbowl; even in a college tournament, Van Pelt could always tell where Woods was on the course because there’d be 500 people following him. Now, for the first time in decades, it was an intimate experience between the ropes – and no circus outside of them.

Walking to the second tee, accompanied by only a walking scorer and a few TV personnel, Van Pelt turned to Woods and woofed: “This has gotta be weird for you, huh?”

“This is crazy,” Woods said.

“Well, this is a typical Bo Van Pelt crowd,” he said, “so I’m in my wheelhouse right now.” The show will go on, and it's scheduled to do so in June. But, in preparing for events without fans, tournament directors face operational and financial challenges.

Not surprisingly, Woods’ group still drew the biggest crowd of the day. Ryan Palmer joked that “somehow, Tiger ended up with a thousand fans following him.” In reality, Van Pelt said, there were probably a couple hundred. When McLaughlin caught up to his wife on the back nine, he said there were only 40 or 50 people watching Woods – an unthinkable scenario in golf-mad Washington. “They loved the access,” McLaughlin said. “In those days it’d typically be eight to 10 deep. It was wild.”

Fans missed a pretty good show, too, with Woods and Van Pelt each firing 67s to play their way into the last group. Despite the sweaty, early-morning wakeup, de Jonge carded a 69 to take a one-shot lead heading into the final round.

“It took a little while to get the adrenaline going,” de Jonge said. “That nervous energy the crowd would provide for you normally, that was gone and you had to build it up yourself.”

Sunday provided a return to normalcy. Massive crowds swarmed Congressional. De Jonge faded. Woods won. There was one telling exchange early in the final round, though, when the group started talking about the eerie third round and what was probably the smallest crowd Woods had played in front of since he was a kid. “He said he enjoyed it,” de Jonge said.

Only a few times since has the Tour closed full or partial rounds to spectators, and they were unusual one-offs because of unwalkable conditions or tree damage. This global pandemic presents an entirely new set of challenges, and though the Tour is still developing its plan for the restart and what constitutes essential personnel, it’s believed that any round broadcast on TV would still require somewhere around 1,500 people on-site, spread out over 300 acres. It’ll be the new normal for at least a month, and perhaps all year.

For both the Tour stars and middle class, the atmosphere would undoubtedly be different without spectators – especially in the age of coronavirus. Players could be quarantined in local hotels. The locker room and dining area could be closed. Range and putting green access could be limited. There could be a bare-bones TV crew. Fan engagement is an underappreciated aspect of the Tour player experience, so who knows – after a while, they might grow to miss the catcalls and asinine cheers.

Except with $7.5 million purses and career-changing opportunities at stake.

Without ambient noise, any sound can shatter the silence and cause a disruption. At Congressional, McLaughlin watched players back off their shots because of a moving cart or a cough in a faraway fairway. There’d be a smattering of applause on the first tee. Awkward hat tips and waves to no one in particular. Silent walks to the next hole. No roars to accompany a birdie binge. Sports psychologists figure to be busy this summer, talking players through how they can sharpen their focus and generate their own buzz and adrenaline rush.

“It’s almost like there’s no outward cue for them that this is go time and this actually counts,” Van Pelt said. “Guys are literally going to have to work on that – that they’ve got to play this solo round at home like a tournament round, and practice their focus, because that’s what it’s going to be like for real.”

“You have to create your own energy,” de Jonge said. “It can be a little bit of a mind game. You’ll have to get in your bubble, tell yourself that this is the new normal, and get on with it.”

The missing fan presence would be even more amplified at the biggest events. At the moment, with the number of confirmed coronavirus cases still rising, it seems unlikely that the PGA Championship (August) and U.S. Open (September) wil have spectators in attendance. The PGA is even toying with the idea of having a virtual fan experience at the Ryder Cup, normally one of the most boisterous events in all of sports.

“It’ll still be quite difficult because of the course, and that’ll keep players’ attention and focus on what it is,” Howell said. “And if that’s the way forward, I promise you every player will agree to doing it, because that’s our way back to playing and competing. But you still won’t get past the awkwardness of it.” 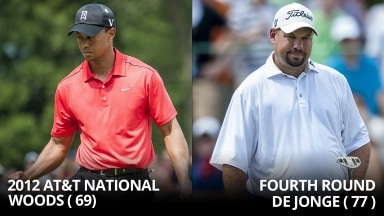 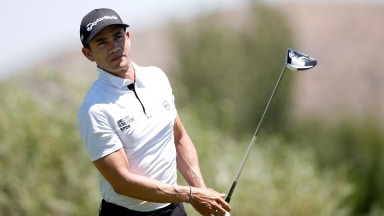 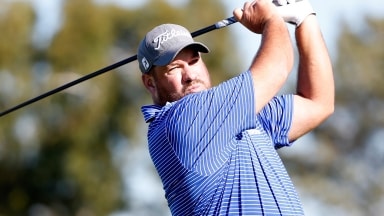 Brendon de Jonge became the 13th player to withdraw his name from consideration for this year’s Olympics.