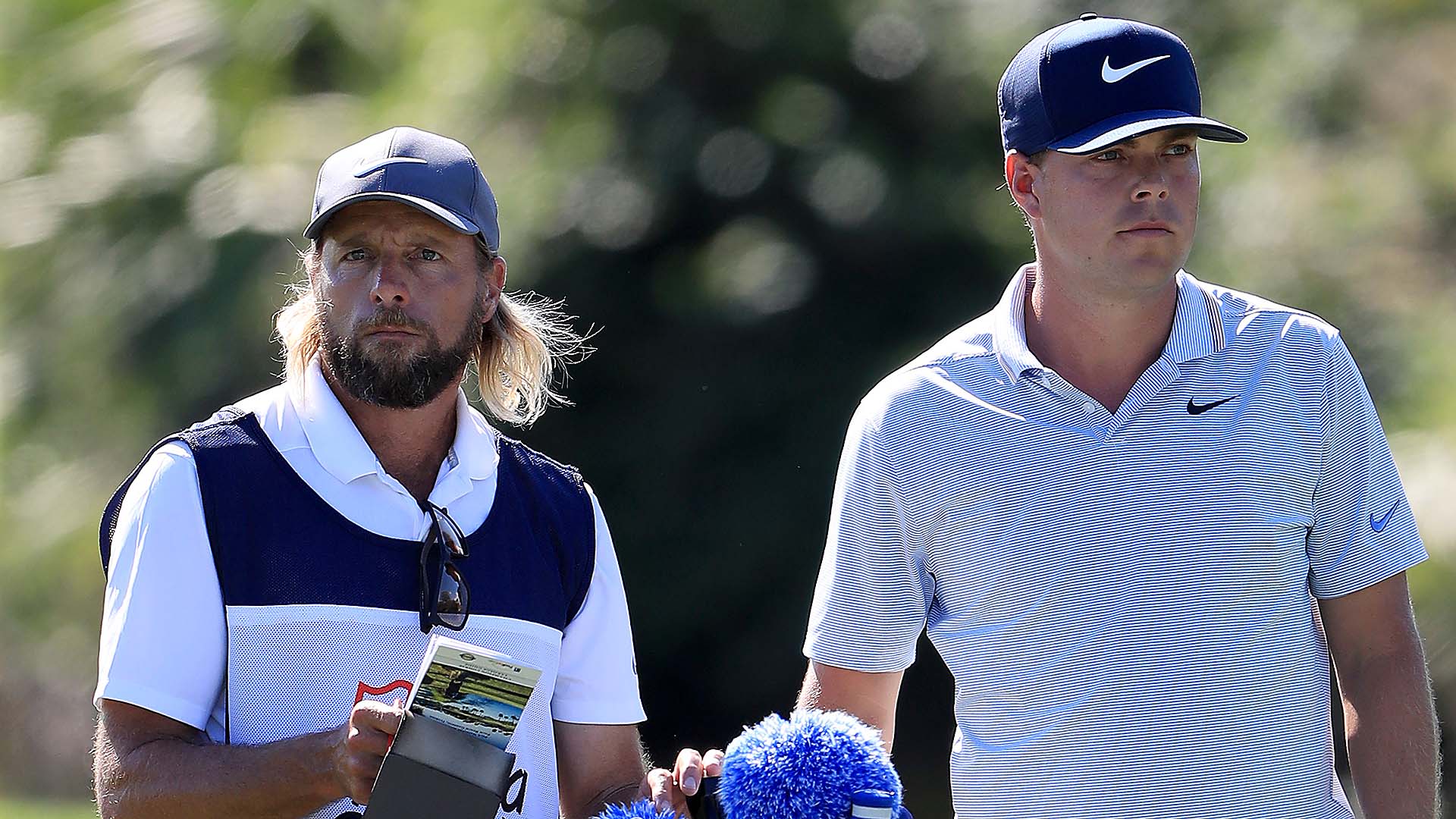 ORLANDO, Fla. – After earning a six-figure payday, Pete Persolja sat in the parking lot of the Super 8, opened Google Maps and punched in “Bay Hill Club & Lodge” on his outdated iPhone. Only one problem: He was maxed out on data. Has been for two years. Unable to access the directions, he reached into the backseat and pulled out his 2007 edition Rand McNally atlas, then charted his route on paper and pointed his 2005 Jeep Liberty toward Arnie’s course here in Orlando.

“Nothing’s gonna change after Sunday,” he said. “Nothing at all.”

PGA Tour caddies have all types of backgrounds – failed tour pros, swing coaches, lifelong friends – but there’s no one quite like Persolja, 43, who has been looping for Honda Classic winner Keith Mitchell since 2016.

Persolja has an instantly memorable nickname, “Crunchy Pete.” He has an unmistakable look, his long hair and shaggy beard recalling Adam Sandler’s homeless caddie in “Happy Gilmore.” And he has such a unique backstory that his use of an atlas isn’t the least bit surprising to those who know him best.

It’s been a life full of adventure and discovery.

After dropping out of Bowling Green State University in the early 1990s, Persolja packed his bags and took a one-way bus bound for Steamboat Springs, Colorado. He spent the winters there trying odd jobs to get by: collecting garbage in the cafeteria of a resort gondola, setting up banquet rooms at the Sheraton and working as a certified cross-country ski instructor and lift operator (his station topped out at 11,775 feet). One summer, he worked out of a hot spring, mixing cement and carrying stones for masoners.

When the weather turned, his identical twin brother, Dave, introduced him to whitewater rafting in West Virginia. It remains the greatest job he’s ever had, training with a group of wild characters who walked around barefoot and slept under the stars. The bare-bones existence appealed to him.

“You never knew what the next day would be like,” he said. “You’d wake up and you didn’t know where the day is going to take you.”

All throughout his 20s he chased the next adventure, wherever that took him. He lived for a month out of his Volkswagen van, camping all over Idaho. He worked an industrial-roofing job in Seattle and drove 48 hours nonstop to return for Gauley Season in West Virginia and bussed tables at a coffee shop in Cleveland. Eventually he grew tired of the nomadic lifestyle, and his funds were getting dangerously low.

In the spring of 2000, on his way to visit his brother in Tennessee, Persolja called the Honors Course outside Chattanooga to inquire about a caddie gig. It was consistent work and good money, if not the same adrenaline rush. He still got his fill of excitement on the side, racing to the Ocoee River after a 36-hole day and kayaking five miles. At night, he’d crash at his buddy’s cabin, sleeping on the porch or under the dogwood tree, or doze in the back of his trusty Jeep with 410,000 miles on it.

Persolja wintered at Olde Florida Golf Club in Naples and had no aspirations for full-time work until he reconnected with Mitchell in 2015. The Chattanooga native had played out of the Honors Course as a kid, and growing up he hired Persolja for club events and U.S. Amateur qualifiers. That fall they were together for the second stage of Q-School when Mitchell was debating what to do when his ball found the hazard at a critical stage in the round.

“Dude, why don’t you putt this?” Persolja said.

Mitchell eventually relented, popped the ball onto the green and eventually made it through on the number.

By the following summer, Mitchell and Persolja were a full-time team – and an unlikely one at that.

“My mind is going 1,000 mph every second,” Mitchell said, “and Pete is always down to earth, always telling me: Everything is going to be all right, man. It’s all good. It’s always all good.”

Life on the Web.com Tour is a grind, with small towns and little pay, but Persolja always kept things interesting.

There was the time Mitchell and a handful of other pros and caddies crammed into a rental house in Salt Lake City. Persolja was supposed to share a bunk with Poston’s caddie, Aaron Flener, but each night, instead of sleeping in his own bed, Persolja camped out on the back patio. “He’s a great guy to room with,” Flener said, “because he’s never there. He doesn’t need the normal comforts that a lot of us need. He’ll leave in the morning, get his work done and then go exploring.”

There was the time Persolja drove from San Francisco to Kansas City, traveling along Route 50, known as the loneliest road in America. “I hit Reno before dark,” he said, “and I found this mountain passage. I slept in my Toyota Camry. I had my pillows and sleep pad and it was super cool. But it was also kind of trippy, sleeping in the middle of nowhere with the doors open. My first thought was that I hope no flying saucer comes by and takes me away.”

And then there was the time he rented a truck for the tour stop in Northern California. When everyone left TPC Stonebrae for the night, Persolja drove onto a dirt patch at the top of a hill and – from 1,100 feet – stared out at the Bay Bridge, Coast Range, downtown San Francisco and all of the airports. “I’m sitting up there, like, Hell yeah! Million-dollar view!” he said. The other half of the week, he slept in his truck in a nook along the coast. “There was a sneaky-good shower by the pool area that week,” he said.

The PGA Tour is more glamorous, of course, and Persolja has soaked up the experience each week.

In Hawaii, he swam and surfed. In California, he looped one morning at Pebble Beach alongside Tour commissioner Jay Monahan and afterward went for a 5-mile hike in Big Sur. The East Coast isn’t as much fun because of the humidity, but last week in South Florida, Persolja swam in the Atlantic Ocean, hiked at MacArthur State Park (where he watched two guys reel in a 6-foot blacktip shark) and jogged along Juno Beach. Nothing changed Sunday morning, even with Mitchell trying to nail down his first Tour title at the Honda.

“I love it,” he said. “It’s not even with the intent of clearing my mind. It just does it anyway.”

Over the weekend, when TV viewers glimpsed him for the first time, Persolja immediately earned cult-hero status and some semblance of social-media fame, which was ironic, since he doesn’t have Twitter. Poston’s caddie runs the @CrunchManPete account that has captured some of Persolja’s random musings over the past two years. (His bio describes him as the “Caddy version of Bear Grylls.”) The account had 300 followers on Sunday morning and now boasts nearly 14,000 – or more than even his PGA Tour-winner boss.

I’m not good at math what is 10% of this? pic.twitter.com/BvbzAQEHc3

My @suunto compass navigated our way through the Bear Trap 🐻 and then my 2007 @randmcnally atlas showed me the way to Bay Hill through gator country 🐊. @APinv here we come!! pic.twitter.com/Ss9cWNi1ZW

A great thing about having long hair is how versatile it can be. I have 3 different styles. Middle part, left part, and right part.

Middle- For running or wearing a hat aka “Exercise Pete”

Left- For road trip cruising aka “Windows down Pete”

Right- For dates aka “Formal Pete”

“Everything you read on my Twitter is 100 percent true,” Persolja said. “It just might not happen 100 percent of the time. Let that sink in.”

Cheeky Twitter posts are one thing, but there’s also a certain charm associated with the free-spirited caddie, especially one who seems to have little use for the $122,000 payday he received Sunday.

“I might have a nicer car at the end of the year,” he said. “My house might be a little better looking. But nothing’s going to change. I’m just going to have to answer a few more texts.”

This week is as good of a time as any to catch up – other than a few hot springs and putt-putt courses, he doesn’t have much on his Orlando itinerary – but getting back to everyone has been an issue. The data storage on his iPhone has been full for the past two years, limiting his ability to retrieve voicemails and store pictures and use navigation apps – the reason he always keeps his 2007 edition Rand McNally atlas handy.

“It’s still great!” he said. “I use it everywhere I go. With these phones you can’t see the big picture.”

He’d rather see where the winding road takes him. 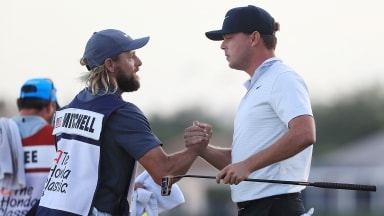 Keith Mitchell's win at the Honda Classic got him into the Masters, but it also put him on the cusp of crashing the WGC-Dell Match Play later this month.