Who she is and where she comes from: The #DriveOn story of Gabby Lemieux 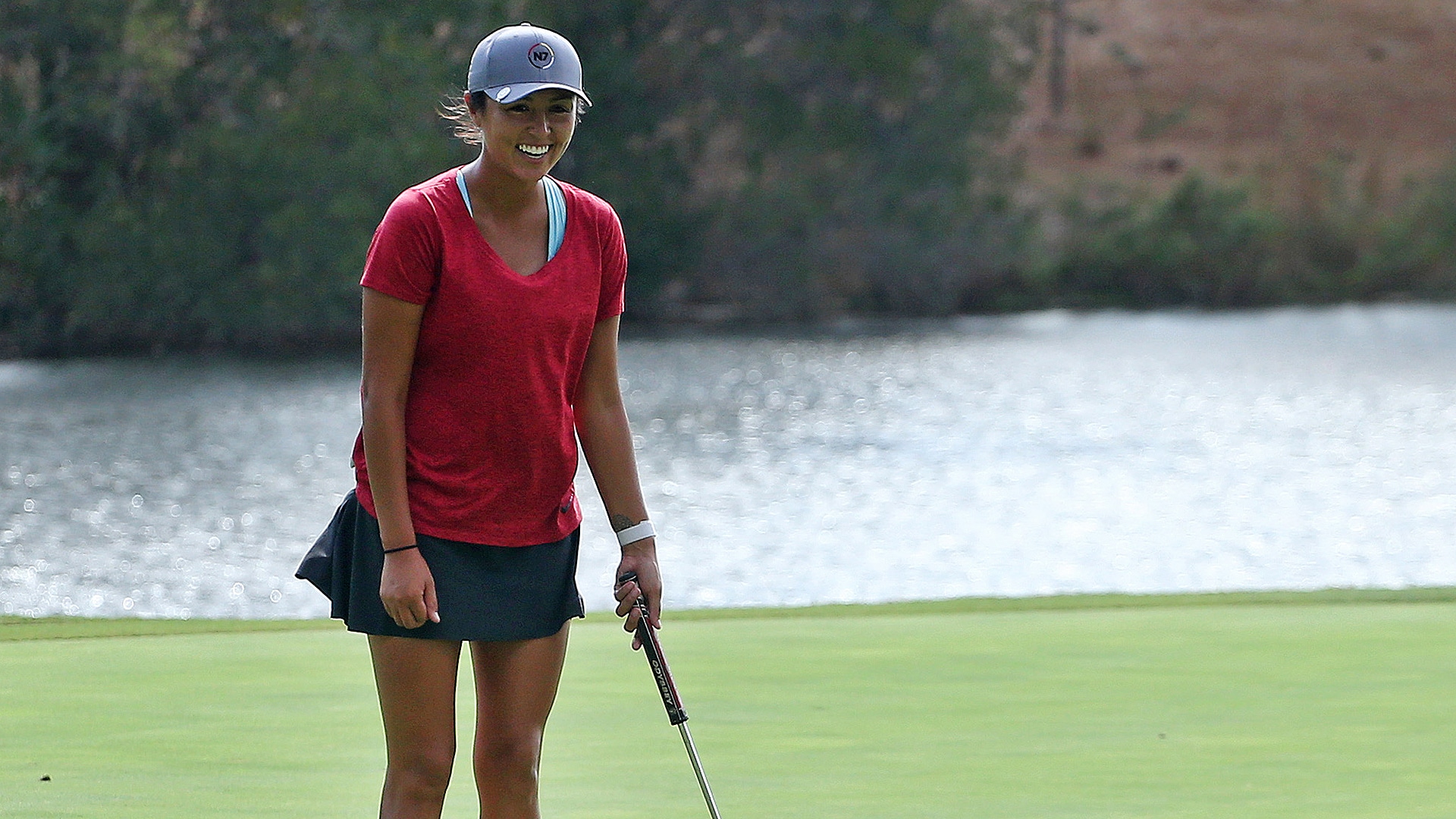 The Shoshone-Paiute Tribes of the Duck Valley Indian Reservation have dwelled for millennia in the high plains of the American West, straddling what is now the Idaho-Nevada state line. Gabby Barker Lemieux grew up in Caldwell, a suburb of Boise just a few hours from the relatively new border of the reservation property. But, the Shoshone-Paiute are her family, her people.

Like many kids in the area, Lemieux played a variety of sports throughout her youth, including volleyball, basketball and soccer. Once she reached middle school, Lemieux shifted her focus to something that was more of a Barker family affair.

“The person who introduced me to golf was my dad,” said Lemieux. “He did it mainly as a hobby and so he could play with his buddies. Eventually, my sister and I wanted to join. Every now and then, he took us to Fairview Golf Course, Timberstone Golf Course and Purple Sage Golf Course. Pretty soon we both started to really enjoy it and he would take us once a week. With my sister and I getting more invested, my mom chose to run a junior league for a few years to help provide more playing opportunities. As we got older, it turned into a lifestyle – eighteen holes a day, seven days a week.”

It helped that she was good at it. Lemieux qualified for the U.S. Girl’s Junior Championship three straight years (2012-14). She also won two Idaho Golf Association Junior Championships. Before long, she was in Lubbock, Texas, competing collegiately for Texas Tech University. Lemieux was named the 2016 Big 12 Player of the Year and guided the Red Raiders to two NCAA Championship appearances. Those results and experiences kindled a desire to pursue golf at the professional level.

When it came to the next steps, Lemieux leaned on a mentor she could relate to both on and off the golf course – Notah Begay III, who is a Native American and part of the Navajo Nation. Lemieux first met Notah when she was in college. He asked TTU head coach JoJo Robertson (also a good friend) if Lemieux could play in an event with him. While the Red Raiders schedule did not allow Lemieux to participate, a strong friendship was formed and has since blossomed.

“Notah said that he saw me trying to pursue professional golf and he would love to help me out if I was willing to have him [as a mentor],” said Lemieux. “Today, we have a very special relationship. We can always talk golf, but sometimes I call about how I am feeling on a personal level, or everyday challenges I am dealing with. I am the only women’s professional golfer who is Native American and either Notah, or someone he knows, has gone through similar trials and tribulations that I have faced.”

Begay III continues to teach Lemieux the business of professional sports and many other aspects of life outside the ropes. Those lessons paid off in 2018 when Lemieux was approached by a good friend, Sam McCracken. He is also the General Manager and Visionary of Nike N7, a division of the renowned brand that is devoted to Native American causes.

McCracken pitched to Lemieux about why she would be a great Nike N7 ambassador. Other members in this exclusive group include Begay, MLB centerfielder Jacoby Ellsbury, 2008 Heisman Trophy winner Sam Bradford and The Black Eyed Peas rapper Taboo Nawasha.

“Nike N7 is all about providing youth with opportunities to grow and stay active through play and sport,” Lemieux said. “I thought that was such a really cool concept because that's how I stayed active and also stayed healthy, throughout my childhood and now. To be part of something like this, it’s really special.”

A platform to support her community has become more important than ever for Lemieux. Back in the Duck Valley Indian Reservation, frequent visitors hope to fish in various lakes across the area. Due to the COVID-19 pandemic and many Native tribes being heavily impacted by the virus, Lemieux’s community has been forced to close all forms of recreation on the reservation from anyone who does not live there.

“It’s really scary because we don't have the best hospital in the country and very minimal resources are available,” she said. “It can be challenging to really understand it all because people don't get a look into what is going on. There are some Native communities that struggle more than others on any given day.

“If a large outbreak were to occur, the tools and resources might not be enough to provide sufficient treatment for all those affected by the coronavirus,” added Lemieux. “All the steps that the Duck Valley Indian Reservation has taken to prevent COVID-19 from being a threat to our land has worked so far, as there have been no positive cases.”

In every step of her journey, Lemieux has received tremendous support on and off the course, from her husband and caddy, Jared Lemieux, to friends, family and other mentors. The more she competes across the United States, the more she also finds support with fans and sponsors of the native community.

“Amerind has given me the [financial] opportunity to travel and play against the best women in the world, at the highest level,” said Lemieux. “Derek Valdo and his entire team at Amerind have been so supportive throughout my professional career.

“To have their support, along with Indian country, has made my journey as a pro golfer such a unique, amazing experience. It’s incredible to see that tribes all over the country are backing me every step of the way and also joining together as one huge fan base.”

Excited for the Symetra Tour season to restart, Lemieux has goals of securing LPGA tour membership via the Volvik Race for the Card. And no matter where she plays next season, Lemieux is greatly anticipating professional golf in her home state with the inaugural Circling Raven Championship at the Coeur d’Alene Casino Resort in 2021.

For now, Lemieux continues to work on her game and use her platform for a greater good.

“Growing up in the Shoshone-Paiute Tribe taught me to accept myself for being unique and different,” said Lemieux. “It taught me to understand that different is good, that my culture is beautiful, and that a platform – like golf and Nike N7 – provides the opportunity to talk about it and show others what a truly amazing life it is.”