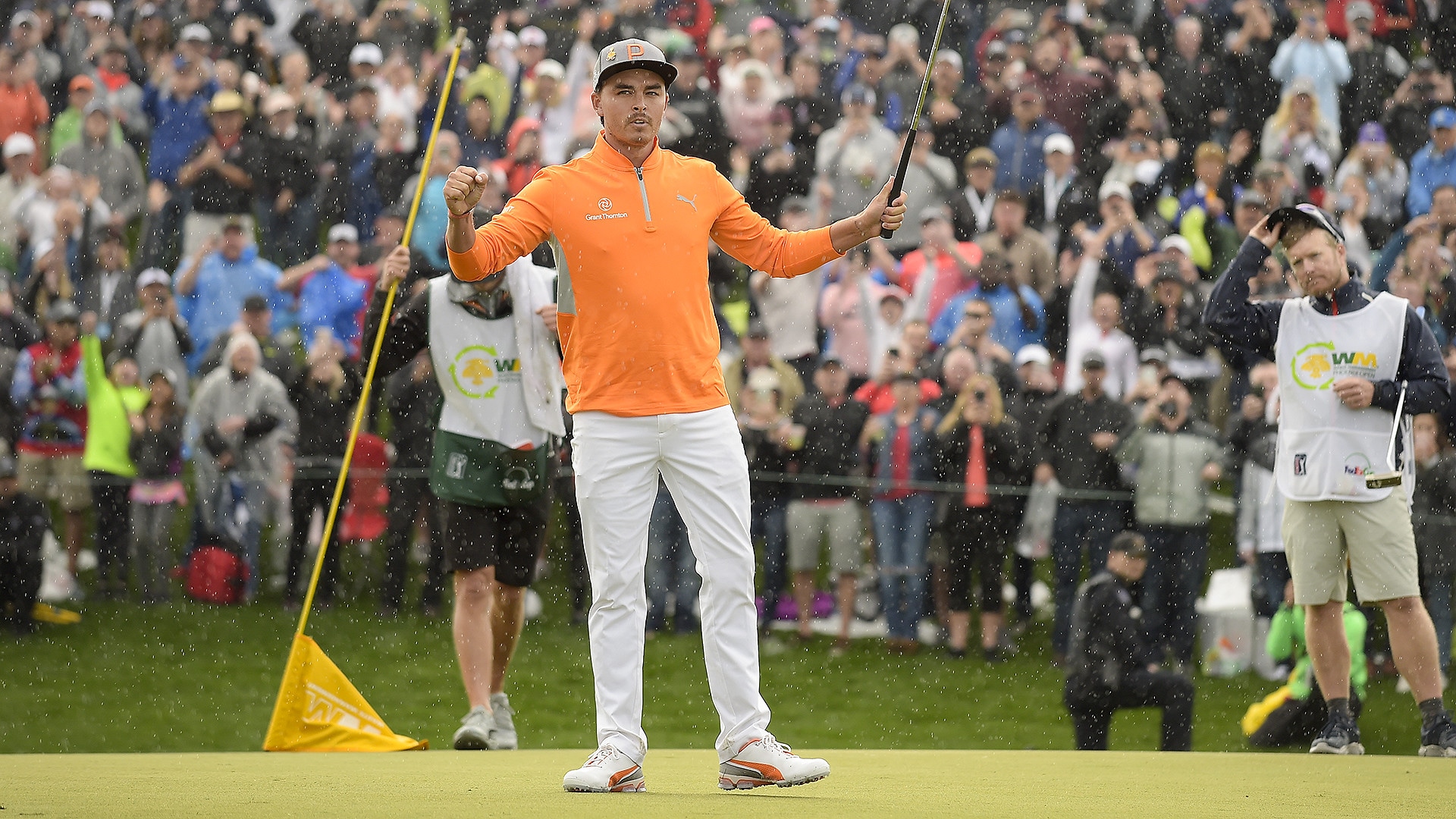 SCOTTSDALE, Ariz. – Some players called it one of the most bizarre days of their careers. A cold, rainy Sunday in the Arizona desert dampened the final round of the Waste Management Phoenix Open, which was highlighted by more dropped shots in one round than were were downed all week at TPC Scottsdale’s famed par-3 16th hole.

It would’ve been hard to set off fireworks, not that there were many on the final day of the People’s Open.

“I hope I never have to go through that again,” said Rickie Fowler, who stormed out to a four-shot lead after 54 holes. “I knew it wasn't going to be easy, but I thought it was going to be a lot easier than that out there today. We got dealt a tough day of weather and conditions. There weren't many low scores. It was just kind of grind it out, had a couple tough breaks and kind of just had to deal with the punches.”

Fowler crossed the finish line Sunday in Scottsdale battered and bruised. He carded the worst closing score of his 11-start Phoenix Open career, a 3-over 74. He made a triple bogey on the par-4 11th hole after finding water twice, once with his chip and another after “natural forces” caused his ball to roll back in after being dropped. He saw what was once a five-shot lead turn into a one-shot disadvantage.

Yet Fowler, somehow, remained upright. And when the skies opened up for a final time Sunday at TPC Scottsdale, Fowler was able to lift his hands in victory at the Phoenix Open. Finally.

“For him to finally get over that hump and you know, finish it and get it done, and to have it end the way it did today was unbelievable,” said Fowler’s father, Rod, who for the first time, along with Fowler’s grandpa Yutaka Tanaka, saw his son win a professional tournament. “I think it made it even more special.”

Rod Fowler said the pressure to get a victory in front of him and Fowler’s grandpa had worn on Fowler over the years. Three years ago in Scottsdale, Fowler was reduced to tears after losing to Hideki Matsuyama in a playoff and ending up second for a second time in this event.

“I know I can win here,” Rickie said back then.

Now, he’s proved it. But it was far from easy.

But things got off to an oddly slow start for Fowler and much of the field Sunday. Fowler failed to make a birdie on the front nine as he fought his swing. He was able to get up and down from the cart path to save par at the par-5 third hole, but a double bogey at No. 5 brought him back to the field a little.

“It looked like Justin (Thomas) and I were playing for second place,” said Matt Kuchar, who was in the final group with Fowler and Thomas. “And then all of a sudden, the 11th hole happened.”

Fowler took iron off the tee and found the rough. Then he missed the green short right. Then he chipped the ball through the green.

“It looked like it was rolling on glass,” Fowler said.

Splash. After a drop, another splash.

Though he got up and down for what Fowler called a “really good triple,” his lead had shrunk to just one shot over Branden Grace, who was making a small run a group ahead.

A shocked Fowler had no choice. He had to dig in, or he’d lose – again. After Fowler made a sloppy bogey on the next hole, his caddie, Joe Skovron, turned to his player and said, “You would have taken this at the beginning of the week, tied five holes to play. Let's go win a golf tournament.”

Fowler went on to make a two-putt birdie on the par-5 15th hole, and then, with fans chanting his name, stepped up and hit the green with driver on the short par-4 17th. With Grace rinsing his tee ball ahead of him, Fowler converted another two-putt birdie, sending the crowd into a roaring frenzy, and headed to the final hole with a two-shot cushion.

The ovation for Fowler after he parred the last was even bigger. He deserved it, thoroughly.

“I wanted to go out and win by five, six, seven shots,” said Fowler, who ranked second-to-last in strokes gained tee to green in the final round but also second in strokes gained putting. “But to kind of put ourselves with our back against the wall, knowing pretty much everything that could go wrong went wrong … to put that all behind us and keep moving forward and keep digging, that was big.”

Said Thomas, who finished solo third at 14 under, one back of runner-up Grace: “I told him in the scoring tent, I think that he's going to get a lot more out of something like that, showing resilience and coming back like that.”

“I have a good feeling going into the majors this year,” he said of his son, who now has five PGA Tour victories but still no major championships.

“We got that out of the way, now we have to get that major.”

As Rickie walked out of the scoring area Sunday evening and down the clubhouse stairs, he had many family members and friends waiting to congratulate him. But Fowler went straight to his grandpa, reached into his pocket and pulled out the winning golf ball, which had been signed just for Tanaka.

He had just received the winning prize.

Of course, what Fowler accomplished Sunday, for grandpa, was better than any golf ball.

“This is the first time I’ve seen him win,” Tanaka said, almost in disbelief.

Yes, it was a bizarre day for Rickie Fowler, and it wasn’t pretty. But in the end, he got the job done.

For himself. For dad. For grandpa.