Will Tiger win the U.S. Open? 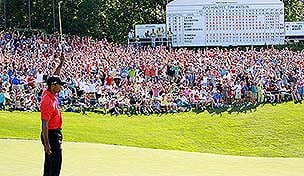 Getty Images
DUBLIN, OH - JUNE 03: during the final round of the Memorial Tournament presented by Nationwide Insurance at Muirfield Village Golf Club on June 3, 2012 in Dublin, Ohio. (Photo by Andy Lyons/Getty Images)  -

Following his win at the Memorial Tournament, will Tiger Woods keep the mojo going as he heads to The Olympic Club for the U.S. Open?

Owner of 14 major championships – three of which are U.S. Open titles – Tiger will be in search of his first major victory since the 2008 U.S. Open at Torrey Pines.

A win at Olympic would also give Woods the same number of U.S. Open victories as Willie Anderson, Bobby Jones, Ben Hogan and Jack Nicklaus with four.

Discussion: Do you think Tiger Woods will win the U.S. Open at The Olympic Club?