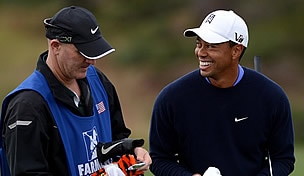 SAN DIEGO - After a day that saw hardly any golf due to foggy conditions, players are getting set for a marathon day tomorrow at the Farmers Insurance Open. Weather forecasts for Sunday, though, are not exactly rosy, and there is a chance that the fog could linger and cause further delays. Assuming play gets underway at some point, here are some items that You Oughta Know for the third (and possibly fourth) round at Torrey Pines:

• In just the fourth event of the 2013 season, the PGA Tour is already headed for its second weekday finish. Foggy conditions wiped out play at Torrey Pines Saturday, pushing the conclusion of the final round to Monday. Earlier this month, high winds forced tournament officials to reduce the Hyundai Tournament of Champions to 54 holes, with Dustin Johnson ultimately winning the event on Tuesday.

• When play (finally) resumes, Tiger Woods will begin play with sole possession of a 36-hole lead for the 31st time in his PGA Tour career. He has converted 25 of those leads into tournament victories, although he has won only twice in the last six occasions.

• Woods was the last player to win the Farmers Insurance Open when leading after 36 holes, having done so in 2008. The previous leaders at the mid-way point have not fared as well: Camilo Villegas tied for third in 2009, Ryuji Imada and D.A. Points both tied for ninth in 2010, Bill Haas tied for ninth in 2009 and Kyle Stanley lost in a playoff in 2012.

• With 74 career PGA Tour wins, Tiger Woods has a bit of an edge in experience over his nearest competitors. None of the seven players closest to him on the leaderboard have ever won on the PGA Tour, and only Nick Watney and John Senden - both four shots off the pace - have won among those in the top 15 heading into Sunday.

• Travel plans for several players are now in limbo due to Saturday's fog-out. Of the 87 players who made the cut, 17 are currently scheduled to play in the Monday qualifier at the Waste Management Phoenix Open - including Billy Horschel, who will play in the final group Sunday with Woods and Casey Wittenberg. PGA Tour official Mark Russell indicated that those players will be given the latest possible tee times Monday in Phoenix, with the hope that they can complete play in San Diego and still make it in time to tee off.