You Oughta Know: Tournament of Champions 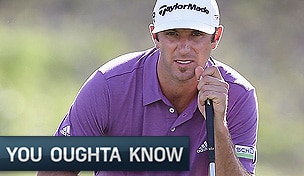 KAPALUA, Hawaii – Here is what You Oughta Know for the final round of the Hyundai Tournament of Champions:

• Since the 2006 season, two PGA Tour events have been shortened to 54 holes – the 2009 AT&T Pebble Beach National Pro-Am and 2011 Barclays. Dustin Johnson won each of those titles.

• A six-time PGA Tour winner, Johnson is looking to become the first player since Tiger Woods (1996-01) to win in six consecutive years straight out of college. He has won at least one Tour event in each of the last five seasons (2008-2012), the second-longest active streak of consecutive seasons with a victory behind only Phil Mickelson’s nine (2004-2012).

• Steve Stricker will enter the final round three strokes behind Johnson. Last year, Stricker entered the final round with a five-stroke lead, equaling the largest 54-hole lead at the Hyundai Tournament of Champions (David Duval in 1999). The year before, he shared the 54-hole lead with Jonathan Byrd and Robert Garrigus before finishing T-4.

• After strong winds forced the cancellation of the first three rounds, Tuesday is expected to be slightly calmer. The forecast calls for winds of 15-25 miles per hour, with gusts of up to 30 mph.