Did Johnson get assist from above? 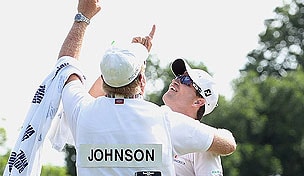 Getty Images
BROUSSARD, LA - MARCH 27: Patrick Grady hits his tee shot on the 14th hole during the third round of the Chitimacha Louisiana Open at Le Triomphe Country Club on March 27, 2010 in Broussard, Louisiana. (Photo by Hunter Martin/Getty Images)  -

FORT WORTH, Texas – Those were the words Zach Johnson tweeted early Sunday before setting out for the final round of the Crowne Plaza Invitational at Colonial. It turned out to be a prophetic twist to a frenzied day.

Regardless of which side of the Tim Tebow divide you find yourself on, Sunday’s final round at Colonial was riddled with the unexplainable that transcended the simple rub of the green, an eventful 18 holes that featured three lead changes, four two-stroke, or more, turns and one of the most bizarre PGA Tour finishes in recent memory.

And at the center of that storm was Johnson – patient and, if one believes in such things, protected.

Johnson and Jason Dufner, the hottest player on the PGA Tour vying for his third title in his last four starts, traded blows, as many predicted, until the haymaker arrived in the form of a pitching wedge that sailed, inexplicably, 148 yards and into the water hazard behind the 15th green.

This is where things get mysterious. No, not Dufner’s triple-bogey-7 on the par 4, that was simply shocking considering his near-flawless play of late. It was Johnson’s wedge shot on the same hole that somehow didn’t meet the same watery fate as Dufner’s that makes for an interesting conversation about fate.

“We hit the approach shot on (No.) 15 and he said, ‘I think Daddy blew into that one so I didn’t go in the water,’” said Johnson’s caddie Damon Green, whose father, Rev. Douglas Brooks Green, died last Thursday.

“We should have gone in the water with Dufner. We were going 30 feet right of the pin and we pulled it and when you do that it goes a lot further and somehow it stopped short of the water.”

Johnson and Green wore green ribbons on their hats this week to honor Rev. Brooks Green, who had been battling stomach cancer. Considering how things played out it’s hard to imagine that Green’s father wasn’t paying attention.

Dufner’s miscue resulted in a four-stroke swing, and Johnson needed almost all of it to claim his second plaid jacket in three years and his eighth Tour title.

Cruising along at 14 under, three strokes clear of Dufner, Johnson made a mess of the closing hole, hitting out of turn from the tee and forgetting to replace his mark on the green after he’d moved it from Dufner’s line.

Thinking he secured a three-stroke victory, it wasn’t until Green hugged him and quietly asked, “Did you move your mark back?” that Johnson realized what he’d done. The two-stroke penalty dropped him to 12 under, a shot ahead of Dufner after a closing 72.

“How lucky I am,” Johnson shrugged, sounding a little like Roberto De Vicenzo, who famously said, “What a stupid I am,” after losing the 1968 Masters because of an incorrect scorecard.

Lucky? Sure, but one of the PGA Tour’s most devout Christians did not dismiss the unexplainable. Nor did he dismiss the pitched match that he Dufner put on Sunday at Hogan’s Alley.

Beginning the day a stroke adrift, Johnson pulled ahead in a birdie-bogey volley at the second hole. Two holes later Dufner squared the match with a 10-footer, and on it went.

The lead changed again at the fifth when Dufner rolled in a lengthy birdie putt and last week’s Byron Nelson Championship winner pulled two clear when Johnson hooked his tee shot at the eighth and made bogey.

The golf world will remember Dufner’s sloppy triple at the 15th, to say nothing of Johnson’s faux pas at the 18th, but it was a rinsed wedge shot at the ninth that likely cost Dufner his third Tour tilt and a chance to become the first player to score the DFW Slam in the same season since Ben Hogan did it in 1946.

“To be honest Zach played better than I did today,” said Dufner, who closed with a 74 to finish alone in second place. “He deserves the jacket but that is definitely one of the weirdest finishes on the PGA Tour anyone has ever seen.”

They call Nos. 3-5 at Colonial the Horrible Horseshoe, but it was Dufner’s play on Nos. 9, 11 and 15 that seemed more nightmare-ish.

He played that trifecta in 6 over with a swing that was slightly off and a putter that went cold at the worst possible moments, which seems apropos for a man whose idol is Hogan.

Dufner has two weeks to think about what could have been before his next start, the U.S. Open where he will be one of the more surprising favorites.

Chances are Johnson will do a good amount of reflecting in the next few days as well, but not about what’s to come. Johnson’s thoughts will fixate on what could have happened.

When asked about his 4-footer at the 18th hole, a putt he thought was for par and a breezy victory but turned out to be for a clinching double bogey, Johnson dropped his head: “I guess it went in. If I would have missed it . . . I don’t know . . .”

Green, however, was a little more sure of what guided the two through a turbulent and testing final loop.

Word is the Rev. Brooks Green had a sneaky good sense of humor; Johnson just had to be patient.