Erin Hills eve: The many complaints of the U.S. Open 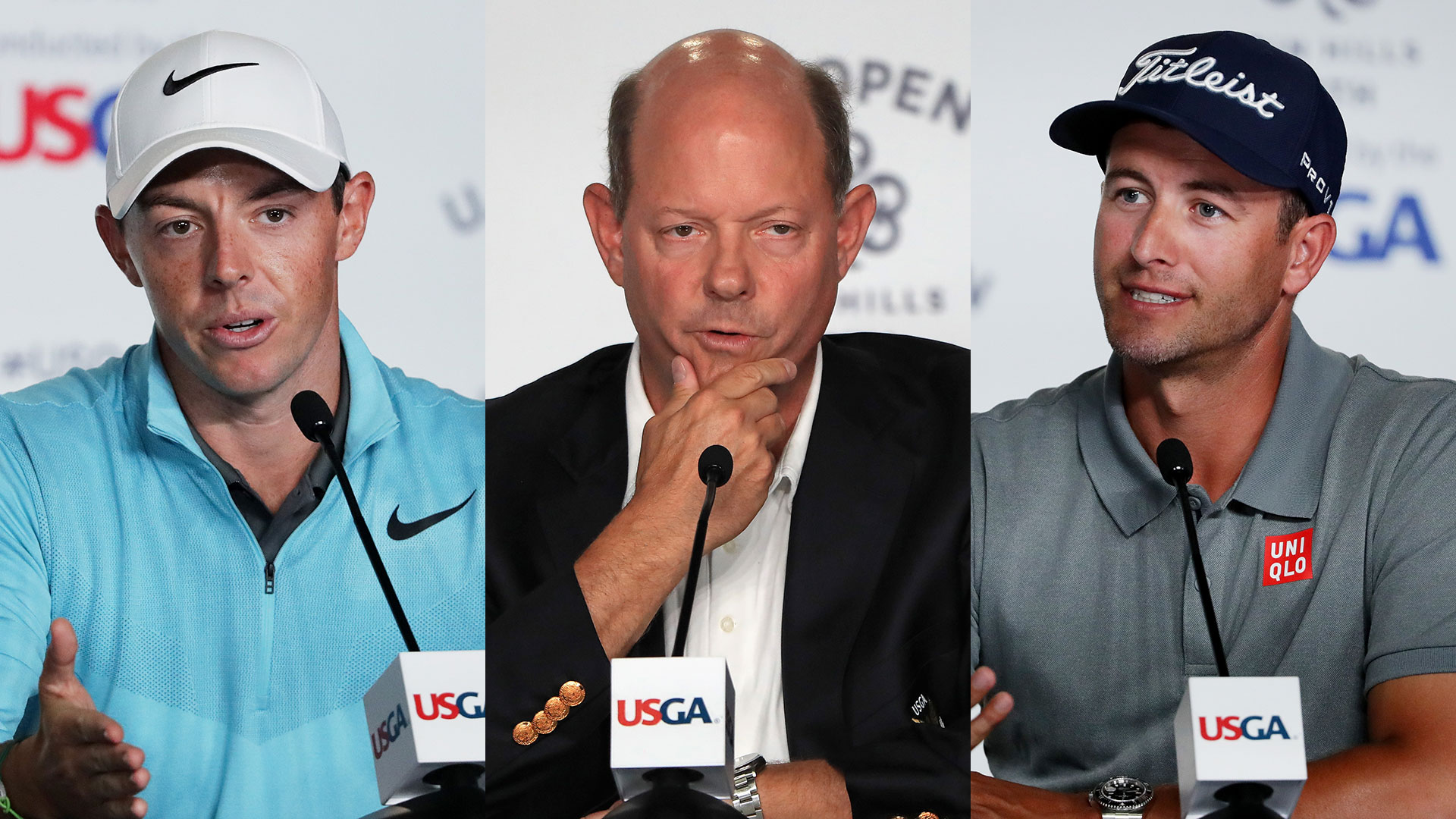 ERIN, Wis. – The Masters has its own soundtrack, the iconic “Augusta” tune, with its tinkling piano and strings.

Sure, there are minor kerfuffles at every big tournament – these are professional athletes, after all – but overall the criticism seems to be muted at three of the four majors. Maybe there’s an odd choice for a tee here, or a questionable pin position there, but the event goes off without a constant chorus of complainers.

Not so at the U.S. Open, which is always rife with controversy and vitriol.

“And usually for good reason,” Brendan Steele said. “The USGA makes a lot of mistakes.”

The first balls aren’t even in the air yet and Erin Hills, just 11 years old and largely unproven on a big stage, has already come under fire.

No surprise here, since it’s become a rite of June. These are the Many Complaints of the U.S. Open:

“The USGA is out of control – that fescue is unplayable!”

By now you’ve seen the videos on social media. Kevin Na tossed a ball into the knee-high weeds just off the fairway and needed a few seconds to actually locate it. Lee Westwood’s caddie, Billy Foster, was nowhere to be seen until he finally emerged, Army-crawling through the tall stuff. (Hope he checked for ticks.)

The oddest part about the fescue is that, on some holes, players are better off missing the massive fairways by 25 yards, not five. It’s the opposite of the graduated rough concept.

On Tuesday afternoon, the USGA decided to trim some of the rough on four holes, citing a “prescribed plan” based on the weather that had blown through and made the fescue lie down and become too dense.

“Really smart,” Steele said … or not.

“Cut the rough?! The USGA has gone soft!”

Rory McIlroy best summed up player and fan sentiment when he was informed that the maintenance staff was out on the course right then, weed eaters in hand.

“Really?” he said, clearly exasperated. “We have 60 yards from left line to right line. You’ve got 156 of the best players in the world here. If we can’t hit it within that avenue, you might as well pack your bags and go home.”

He’s got a point, of course – these are probably the widest fairways we’ve ever seen in a U.S. Open. Miss it in there, and there should be some sort of penalty, whether it’s a hack-out, an unplayable or a reload back on the tee.

The perception was that the USGA caved, that they watched the clips online and scaled back, fearing another revolt like at Chambers Bay.

Not exactly, USGA setup czar Mike Davis said: “It had nothing to do – absolutely zero – with what the players were saying.”

That prompted plenty of eye-rolling, too.

That’s how many justify the four days of ruthless, emotionally draining competition – that next week, and the week after that, players can go back to their bomb-and-gouge mentality.

There has always been more smiles on death row than at a U.S. Open venue. Players came to the year’s second major expecting the worst and usually got it: a long, narrow course, ankle-high rough, and greens that reacted like concrete and rolled like quartz. Oakmont, Winged Foot, Shinnecock, Pinehurst and Pebble are difficult already, no manufactured punishment necessary.

But even the USGA concedes that its philosophy has evolved. It is in the midst of a rebranding, from the “toughest” test in golf to the “ultimate” examination. Accuracy, trajectory, spin, curvature, recovery, management, nerves – they’re all part of the ideal Open package.

“We are never, ever talking about that we have to have even par win or we have to make this as tough as possible,” Davis said.

And then this: “I can promise you, if we wanted to make it really tough, we could make it far, far tougher than what we make them at the Open.”

See, guys – be thankful they have showed restraint.

“Even par should be the winning score!”

Davis insists that even par is not a target score … so it’s purely coincidental, then, that the 72-hole total always seems to creep toward that number.

The winning score has been under par four of the past six years, and that run seems destined to continue this week, with more rain in the forecast and the first par-72 layout at the Open since 1992. Jordan Spieth, in fact, predicted the winning score will be somewhere between 5 and 10 under. Even more eyebrow-raising was this: “And I think the USGA will be OK with that.”

And it should. Even par would be an acceptable winning score if the course was a difficult but fair test. That’s not always the case, as the USGA – which turned a blind eye to golf’s distance boom – has been accused of tricking up the courses to preserve this artificial barrier.

At Merion in 2013, they shifted the mowing lines for fairways and had par 3s in excess of 230 yards and cut hole locations on ridges and slopes. At Chambers Bay in 2015, they destroyed the greens the weekend before the tournament and created such a bumpy putting surface that 5-footers became guessing games.

And last year, at Oakmont, they pushed some of the fastest, most undulating greens in America to the edge, and then past it, as Dustin Johnson’s ball moved while he addressed a short putt.

“If their major pinnacle event for them requires courses to be the way they are,” Adam Scott said, “then it doesn’t set a good example for every other bit of golf that they try to promote. Maybe we should get the numbers out of our heads and try a new strategy.”

“Suck it up! Pro golfers are such babies!”

Not quite. The Open has become an excuse to take a flamethrower to the USGA, which gets one chance a year to exert its influence and challenge the world’s best players. Unfortunately, because of their various blunders – confusing rules, faulty setups, unpleasant fan experiences – the blue blazers lost the benefit of the doubt years ago, thus it’s open season on their various tactics.

There’s this aspect, too, according to Steele: “What’s the worst thing that’ll happen to you if you criticize them? They’ll put you in the last tee time? If you get in, you get in. I think that’s why you see guys speaking out a little more.”

Jack Nicklaus loved when players used to chirp about the course because he could immediately rule them out from contending. In 2017, would there be anybody left?

“Mike Davis is way too involved!”

Quick: Name the person who sets up the courses at The Open Championship.

You can’t. And you shouldn’t.

Too often Davis is front and center, defending his setup choices. As a result, the Open becomes as much about Davis as it does the participants, and that doesn’t sit well.

And yet, through all of that, the USGA still holds all the power here.

As much as players might complain about the fescue or the setup or the scores, they aren’t going to boycott the U.S. Open. They’ll still show up and compete for the silver trophy … even if it’s through gritted teeth.