Ryder Cup was just what Bryson DeChambeau needed, for one week, at least 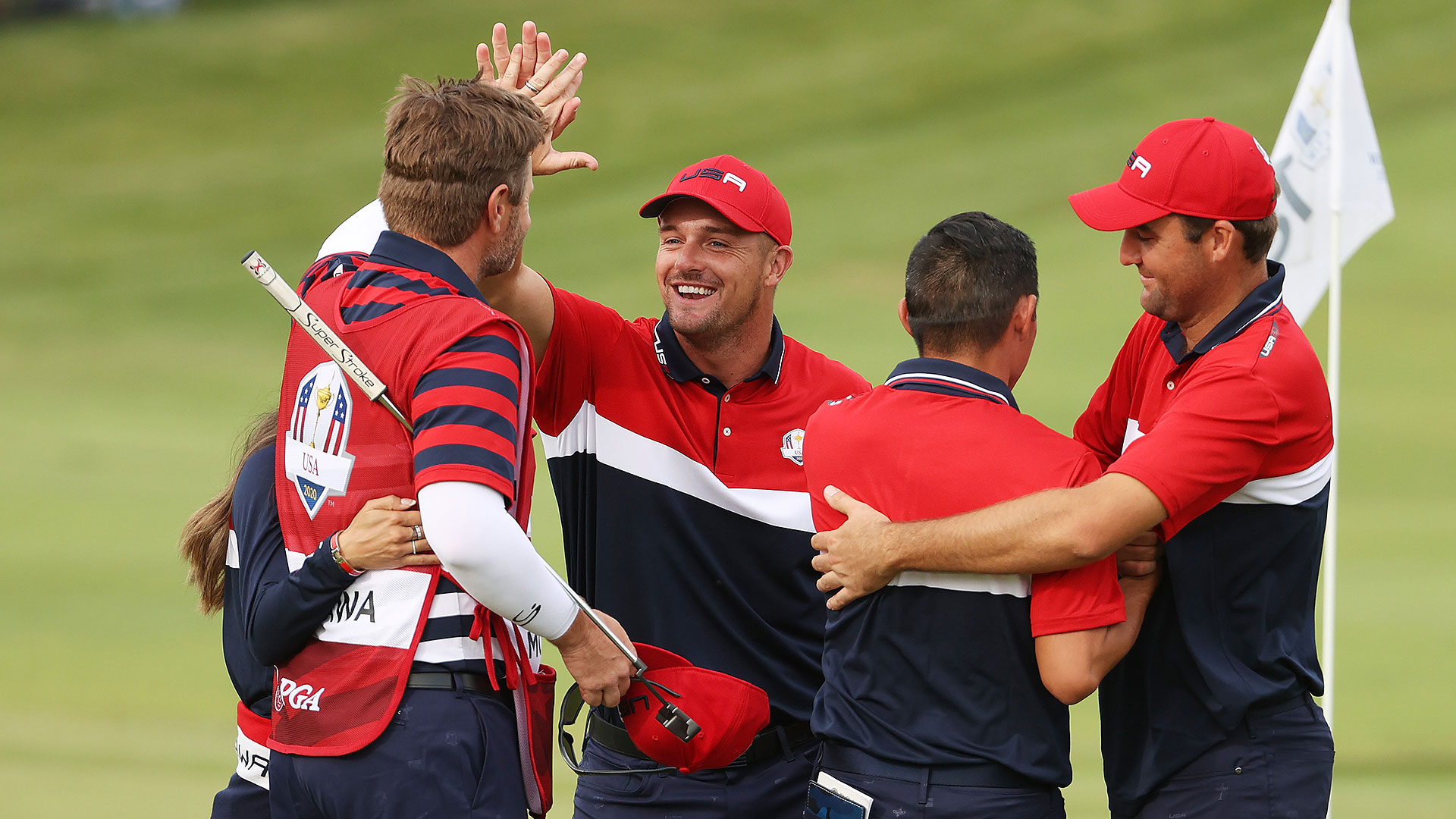 Soaking up the adulation, Bryson DeChambeau doffed his cap and pumped his fist to the rhythm. Here in the delirium of Ryder Cup Sunday was everything he’d craved – adoration, respect, appreciation – and it was hard to recall a time when he’d looked happier.

“This has been such a crazy, weird year for him,” said his mother, Jan, moments after their embrace behind the 16th green, “and to hear people shouting his name – not Brooksy – wow, it’s just awesome. It makes my heart happy.”

At last, he had hopped off this nonstop carousel ride of drama. Oh, sure, because he’s Bryson, there were a couple cheeky moments – like when he laid down his putter to express his displeasure with a non-concession – but that was harmless fun. During this historic Ryder Cup rout, he pulled off an unlikely feat: He was the consummate teammate while also showcasing his singular talent.

DeChambeau wasn’t the Americans’ greatest asset; that was Dustin Johnson, who became just the second U.S. player with a perfect 5-0 record.

He wasn’t the Americans’ most vocal leader; that was Justin Thomas, whose ruthless aggression is matched only by his sense of brotherhood.

But as usual, DeChambeau was the Americans’ most entertaining player. Dour and brooding for months, he was light and loose at Whistling Straits, a one-man highlight reel who was fully engaged.

“I think this whole thing was tremendously helpful for him,” said his older brother, Garrett.

How DeChambeau would gel with this tight-knit U.S. group was one of the week’s most compelling storylines. His petty feud with Brooks Koepka threatened to splinter the team room, and his admission that his hands were “wrecked” because of long-drive prep underscored the concern that he was more committed to his brand than his band of brothers.

Even on a tour of single-minded individualists, DeChambeau remains the ultimate outsider. If the U.S. needed a Ryder Cup victory to stem the European dominance and usher in a new era, DeChambeau needed a strong performance for more personal reasons.

“I was thinking to myself that if he can prove himself to do well at the Ryder Cup, it could really propel him to be looked at differently,” Jan DeChambeau said. “Then, of course, something else will happen and it’ll go the opposite direction again, and that’s life. That’s just the way people are. But he likes to please. Always has.”

Because of his bravado and public missteps, DeChambeau will never be mistaken for the most popular player on Tour, and in recent months he’s become even more of a lightning rod for an increasingly hostile fan base. Since reinventing himself as the game’s biggest bopper, he has been the star attraction at tournaments, but his appeal is largely experiential. They want to see the carnival act, the whole Bryson Experience – the bombs, the birdies, the bombast – and he almost always obliges.

But there’s also been a darker side to this attention-seeking behavior, the onslaught of negative press and fan abuse taking a toll on his psyche, to the point that PGA Tour commissioner Jay Monahan made the unprecedented decision to step in and curb spectator conduct. The Koepka kerfuffle, the quitting caddie, the equipment complaint, the vaccine misinformation – all of that turmoil weighed heavily. At the end of the season, he seemed closer to breaking down than breaking through.

“It’s been hard, really hard,” Jan DeChambeau said. “I’m not blaming y’all or social media, but people feel like there’s no ramifications to what they say. And Bryson says, ‘Mom, you can’t read it! You can’t get into that!’ But it’s been really hard on him. He’s just trying to get out there, take another step the next day, and do the right things.

“I think he made the mistake of saying certain things that maybe he could have said differently, but he learned a lot. You have to understand: This is such a big stage for someone who is just five years out of college. There’s a learning curve, even with the media. There are some people who are very polished with what they say and how they do things, but he’s learning that. It’s all a learning process.”

Coddled by captains, comforted by a forced sense of camaraderie, cajoled by a partisan crowd, DeChambeau found the safe space he’s been seeking. Buoyed by a successful partnership with rookie Scottie Scheffler, DeChambeau went 2-0-1 while producing his usual pyrotechnics: his 417-yard blast, his eagle-2 start to singles, his playful interaction with the crowd (“Guys, I’m still going for the green! Calm down.”), a convincing takedown of the Ryder Cup’s all-time points leader. Along the way there were no “Brooksy!” heckles. No chirps about his protein consumption. No mentions of his high-profile crackups.

“I fed off every single shot,” he said afterward. “They were electric. It’s an atmosphere you don’t get very often, but one that you can feed off when you do.”

One memorable Ryder Cup performance might burnish a legacy, but it can’t alter a reputation, not completely. That takes time, self-reflection, meaningful progress. When he reenters the unforgiving arena of Tour life, only DeChambeau can control his behavior and messaging.

“He really is a sweetheart,” Jan DeChambeau said, “and he can just be a little awkward sometimes when he says things. We’re not perfect. We’re not perfect people. We can all be guilty of that. But I can promise you he’s learning.” 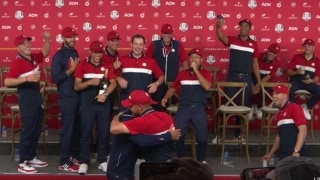 There were encouraging signs last week at Whistling Straits. DeChambeau never complained about his limited role as a birdie-making fourballs specialist, trading his clubs for a set of pompoms while his teammates battled in the morning. His status as a U.S. team member forced him to end his month-long boycott of the print media. Even his much-discussed relationship with Koepka seems to be thawing. At the urging of Justin Thomas, DeChambeau and Koepka embraced at the end of the winner’s news conference Sunday night while their teammates belted out, “Why Can’t We Be Friends?” Moving forward any animosity between the two will be manufactured, to drum up interest in their rumored charity match later this fall.

“He’s handling all of this really well,” his brother said. “I’m really proud of him.”

This was an important reset, a much-needed reminder that even those who are different, who are brash and eccentric and goofy, can still be accepted into the larger group. The experience was an eye-opener for DeChambeau, too. Though his team of handlers and number-crunchers and social-media mavens is omnipresent, at times he can be painfully isolated from his peers. That’s the cost of being intensely driven, perhaps, but the journey alone isn’t as fulfilling. It was revealing, then, that his main takeaway from the week was how close he and his teammates became, how unified they were. He called the Ryder Cup the “coolest experience” of his career, better than even his major moment.

“Since Bryson was little, he’s been so driven in golf and it’s been such a focus of his individually and it’s got him to where he is, but he’s looking at the other side of it now,” his brother said. “He can see the friendships he’s making. It’s been fun to see him embrace that and be a part of it.”

Along the rope line and up in the pavilion, tens of thousands of fans were chanting DeChambeau’s name, and his family swelled with pride. He has been many things in his career – praised and reviled, cheered and jeered – but never this. Beloved.

For one week at the Ryder Cup, they celebrated him, enthusiastically, universally, and hearing those roars never sounded so good.