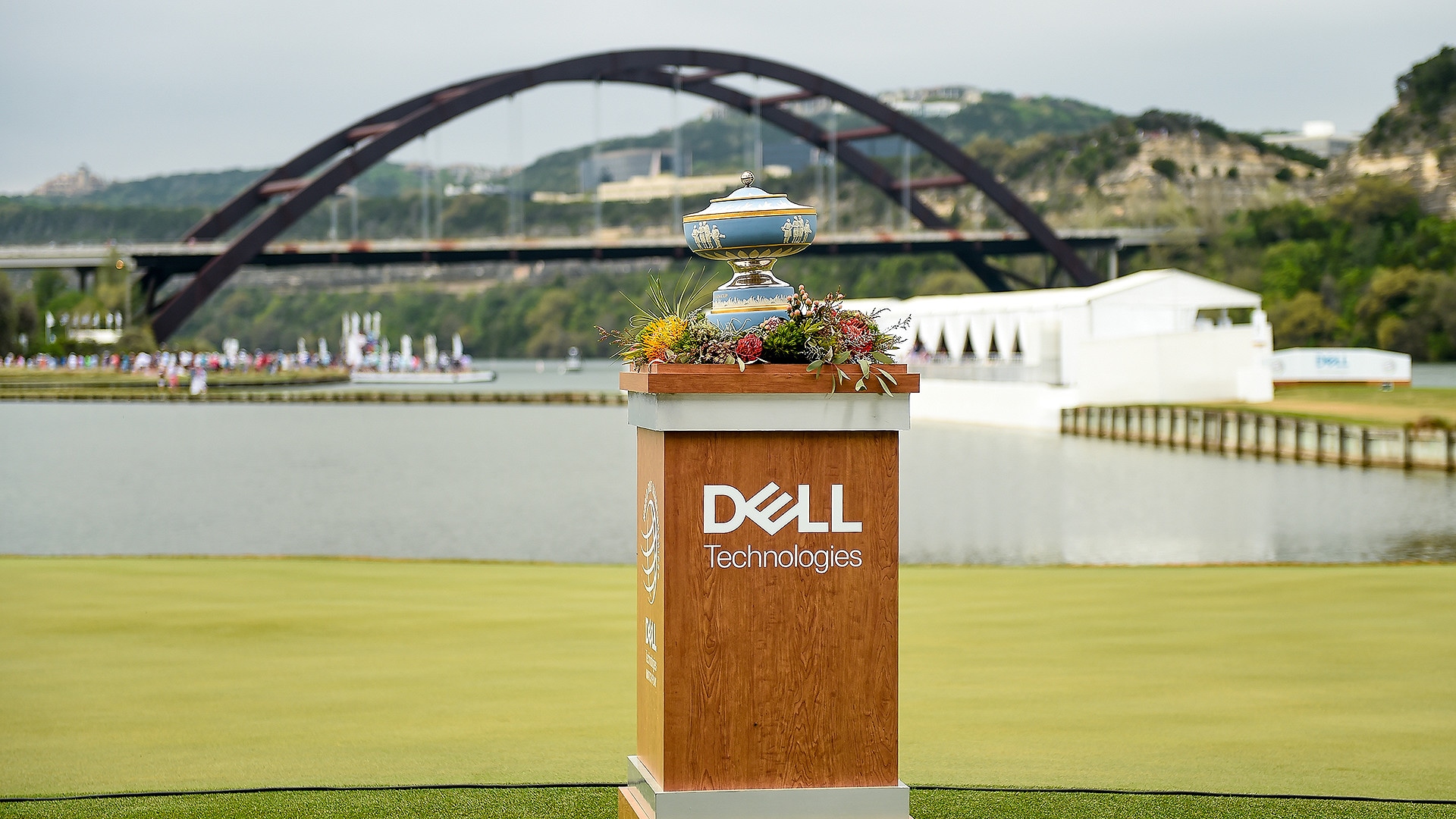 The bracket is set, and the matches are underway. Here's a look at how the drama unfolded during the opening day at Austin Country Club, where all 64 players teed it up in the first of three group-stage matches:

Robert MacIntyre (41) def. Kevin Na (28), 2 and 1: In one of the day's most exciting matches, MacIntyre chipped in for eagle at the short par-4 13th to draw even. He moved 1 up with a Na bogey at the 14th and looked poised to take control of the match with a 32-footer for birdie at the 15th. But Na also made a birdie putt from off the green to stay 1 down. At the par-5 16th, the Scot holed out from a greenside bunker for eagle to go 2 up and sealed victory with a par at No. 17.

Matt Kuchar (52) def. Justin Thomas (2), 3 and 2: In one of the biggest surprises of the day, Thomas, making his first start since his Players victory, shot 2 under (including the usual match-play concessions) but couldn’t keep pace with Kuchar, the 2019 finalist. Kuchar had only a pair of top-25s in the past 13 months, but he improved to 29-10-3 in this event.

Jon Rahm (3) def. Sebastian Munoz (56), 1 up: It was a rough start for the No. 3 overall seed, who played the first five holes in 3 over par but was only 1 down. Rahm steadied himself to build a 3-up lead, but that’s when Munoz ripped off four straight birdies on the back nine to erase the deficit. Tied with four holes to play, Rahm drained a 20-footer for par on No. 15, birdied the par-5 16th to take the lead and then buried a 10-footer on the last to earn the full point.

Collin Morikawa (4) vs. J.T. Poston (63), tied: Poston led, 2 up through 11 holes, but Morikawa eagled the par-5 12th to cut his deficit in half. Morikawa grabbed the lead with a birdie at No. 16 and they traded birdies at the 17th. Poston, however, birdied the final hole to earn a draw.

Billy Horschel (32) def. Max Homa (35), 1 up: Horschel birdied four of his first six holes to streak to a 4-up lead. Homa steadily clawed back to even the match through 16 holes, but a birdie by Horschel at the par-3 17th was the difference.

Antoine Rozner (58) def. Bryson DeChambeau (5), 2 up: Ranked 64th in the world and making his PGA Tour debut – he doesn’t even have an avatar on the leaderboard page! – Rozner stunned DeChambeau, making five birdies and leading for all but two holes. Though he tried to give it away late, driving into the water on 16 and pulling driver on the short 18th despite carrying a 1-up lead, Rozner hit a tasty wedge from the right rough to pull out the surprise victory. DeChambeau entered the week with a victory and tie for third in his past two starts, but he dropped to 1-3 overall in pool play.

Tommy Fleetwood (21) vs. Si Woo Kim (45), tied: One of the Ryder Cup heroes from 2018, Fleetwood hearted a 10-footer on the last hole to tie a back-and-forth match against Kim. It was a messy match, with Fleetwood mixing five birdies with four bogeys and a double, while Kim was steadier (with two birdies and a bogey) if unspectacular.

Xander Schauffele (6) vs. Andy Sullivan (57), tied: Schauffele was three down at the turn, but he birdied Nos. 11, 12 and 16 to tie the match heading into the closing stretch. The top seed was still fortunate to escape with a half point, after Sullivan missed a 5-footer on 17 and then drove it into the penalty area on the home hole.

Scottie Scheffler (30) def. Jason Day (44), 2 up: Scheffler, a University of Texas alum, never trailed in the match, pulling ahead for good when Day pulled his tee shot into the water on the par-5 16th. Day, a two-time winner of this event, still had a chance to tie the match on the final hole, but his tweener wedge shot from 50 yards came up short of the green, in an awkward spot just outside the edge of the bunker.

Patrick Reed (7) vs. Bubba Watson (55), tied: During an eventful back nine, both players combined for seven birdies – but Reed’s par on the final hole was enough to steal a half point. Reed was 2 down with two to play but sank a 14-footer on 17 and then watched as Watson made a mess of the home hole after having just 40 yards for his second shot.

Joaquin Niemann (26) vs. Christiaan Bezuidenhout (33), tied: Finishing with a flourish, Bezuidenhout hit his tee shot to 9 feet on 17 and then ran home a 17-footer on the final green to stun Niemann and escape with a half point.

Tyrrell Hatton (8) vs. Matt Wallace (51), tied: These two were never separated by more than one hole, with Hatton taking a 1-up lead through 16. But, fittingly, Wallace birdied the 18th to tie the match.

Sergio Garcia (39) def. Lee Westwood (18), 4 and 3: This match was never tied after the opening shots. Garcia birdied the first hole, one of seven on the day for the Spaniard, to cruise a victory over his potential Ryder Cup teammate.

Webb Simpson (9) def. Talor Gooch (59), 6 and 5: In one of the most dominant showings on Day 1, Simpson used a string of three straight birdies and then a conceded hole on the front nine to build a sizable advantage against Gooch, one of the last players in the field who had recently tied for fifth at The Players.

Mackenzie Hughes (48) def. Paul Casey (17), 3 and 2: The Canadian birdied four of his first six holes to build a 3-up advantage and it never dipped below 2 up, despite not making a birdie over his final 10 holes.

Patrick Cantlay (10) def. Brian Harman (54), 1 up: In the best-played match of the day, Cantlay and Harman combined for 14 birdies, an eagle and zero bogeys (including the usual match-play concessions), with neither player taking more than a 1-up lead. Cantlay’s pitch-in for eagle on No. 12 proved to the difference, as he held off Harman down the stretch and then holed one final birdie putt on the last to earn the full point.

Carlos Ortiz (42) def. Hideki Matsuyama (23), 4 and 3: Ortiz won each of the first three holes and never looked back, cruising to a comfortable victory over Matsuyama, who made a bogey, a double and conceded two holes. The good vibes continued in the state of Texas for Ortiz, who attended North Texas and earned his lone Tour title in Houston.

Ian Poulter (60) def. Rory McIlroy (11), 6 and 5: McIlroy’s recent struggles continued, as the only time he was tied in the match was on the first tee. Though McIlroy cut the deficit to 1 down after a birdie on the eighth hole, Poulter ran off five consecutive won holes (he birdied Nos. 9 and 11 and then eagled 12, despite being 84 yards behind McIlroy) to pour it on, leading to an opening-day rout. McIlroy's day ended by pitching his shot into the water on No. 13.

Cameron Smith (25) def. Lanto Griffin (46), 1 up: Two down with three to play, Smith won the 16th hole with a birdie, took advantage of Griffin’s wayward tee shot on the short 17th and then won the 18th with a par after Griffin butchered three consecutive shots from inside 30 yards. Smith’s three straight holes won (the first time he’d led since the sixth hole) gave him the W.

Dylan Frittelli (64) def. Tony Finau (12), 6 and 5: In a disastrous day for the top seed in this pod, Finau double-bogeyed the opening hole and was 4 over par for the 13 holes he played. Coupled with five birdies of his own, Frittelli led from the jump and thumped the U.S. Ryder Cupper.

Jason Kokrak (29) def. Will Zalatoris (40), 1 up: In a wildly entertaining battle that featured 11 birdies and six bogeys, Kokrak birdied four of the last five holes to eke out a full point over Zalatoris, the whiz kid who’s vaulted inside the top 50 in the world. Kokrak was 1 down when he buried a 12-footer on 17, then laid up on the drivable 18th and wedged to 6 feet to seal the match.

Kevin Streelman (53) def. Viktor Hovland, 4 and 2: Streelman never trailed against one of the pre-tournament favorites, playing steady with four birdies against just one birdie while Hovland, the 2018 U.S. Amateur champion, struggled to make anything happen. Streelman’s back-to-back birdies on Nos. 15 and 16 closed out the match against the top seed in the pod.

Abraham Ancer (27) def. Bernd Wiesberger (43), 3 and 2: Ancer, a 2019 Presidents Cupper, won four of the first six holes and coasted to an easy win over Wiesberger, who carded four bogeys and two birdies and trailed by as many as five holes after the 12th hole.

Daniel Berger (14) def. Erik Van Rooyen (62), 6 and 4: Despite withdrawing from two of his past four events because of a lingering rib issue, Berger showed no ill effects on Wednesday, making five birdies on the front nine to open up a sizable advantage. Berger entered the week with a 1-8 record in this event.

Harris English (19) def. Brendon Todd (47), 1 up: In a battle of former Georgia standouts, English hung on for a narrow victory despite playing the last five holes in 2 over. After a drought-busting victory at Kapalua, it’s been a rough few months for English, who doesn’t have a top-25 and withdrew before the start of The Players because of a bad back.

Jordan Spieth (49) def. Matt Fitzpatrick (15), 3 and 1: Even with a few wayward shots on the back nine, Spieth’s nine consecutive pars were enough to salt away the lead over Fitzpatrick, the top seed in the pod, and finished him off with a dart to 8 feet on 17. Spieth played his way into the field with three top-5s in his past five events. Fitzpatrick, meanwhile, dropped to 4-9 in this format.

Matthew Wolff (20) def. Corey Conners (37), 3 and 1: Two down on the back nine, Wolff caught fire, making birdie on Nos. 13, 15, 16 and 17 – four straight won holes – to earn the victory in his tournament debut. Wolff was making his first start since withdrawing following an opening-round 83 at the WGC-Workday Championship four weeks ago.

Sungjae Im (16) def. Russell Henley (50), 1 up: Im never trailed and managed to match Henley shot for shot down the stretch to eek out a win. Henley had a 14-footer for birdie at the 18th to tie the match but couldn't convert.