Every step, all 71 swings, Thursday was another full day of work for Tiger Woods 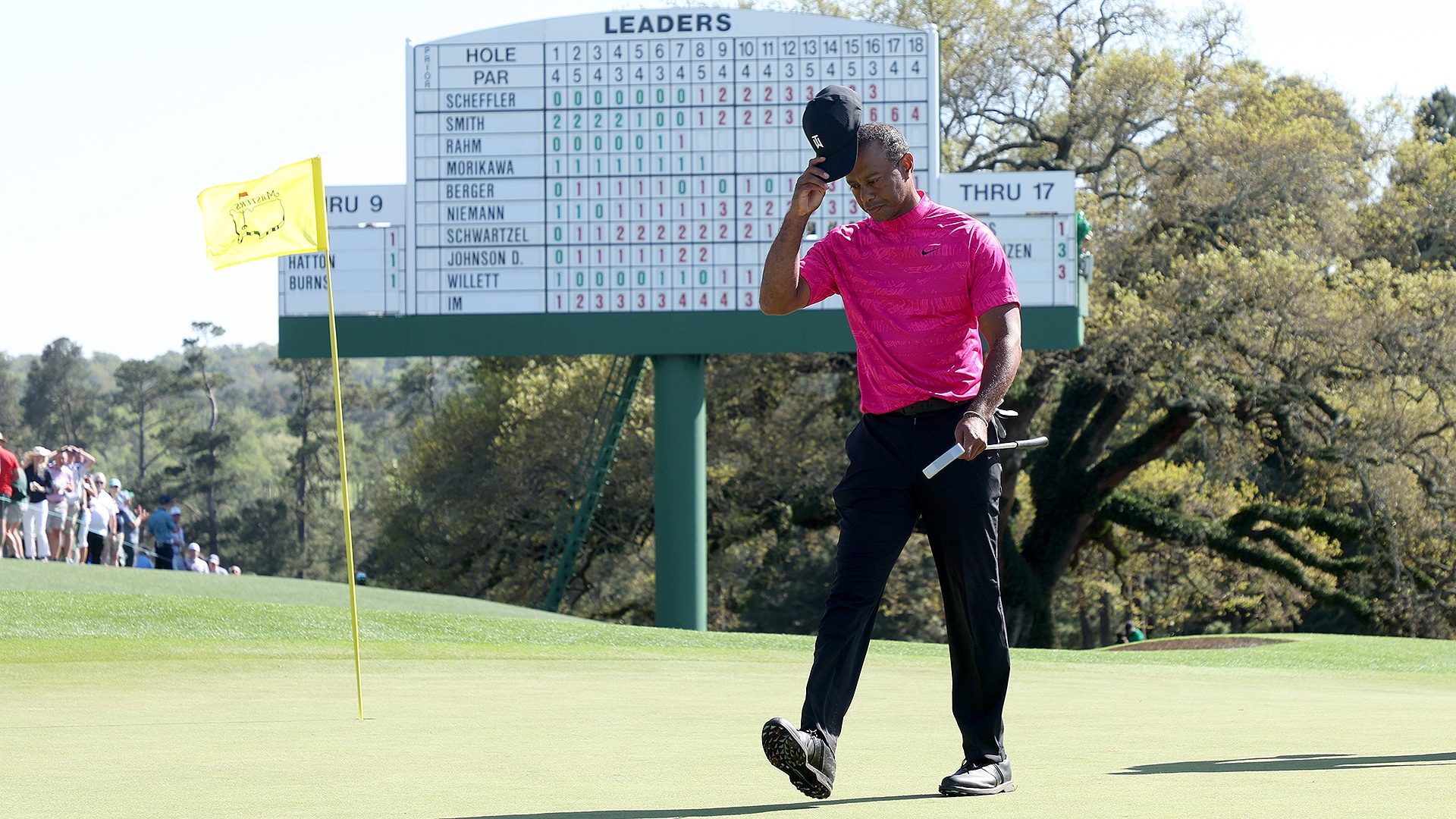 AUGUSTA, Ga. – The final chapter of Tiger Woods’ career began at 10:21 a.m. Thursday, when he arrived at the Masters tournament practice area wearing a sweat-drenched, fuchsia mock turtleneck and holding a white towel, a fitting metaphor for the aging warrior who refuses to throw it in.

It's uncomfortable to think about how Woods arrived here at Augusta National. Not just the horrific crash that nearly cost him not only his limb but his life. Not just the three months he spent confined to a hospital bed, hoping to someday soon be cleared to take one agonizing step, then make one excruciating walk. No, it’s uncomfortable to think about what it took to get him through the gates today for his latest competitive comeback; the amount of time, energy and strain devoted to the 46-year-old, pre- and post-round, just so he can have the opportunity to lace up his new FootJoys and compete.

“Not easy,” Woods said. “People have no idea how hard it’s been. My team does. They’ve worked with me every single day.”

That was the backdrop to Woods’ opening, 1-under 71, a score that was a monument not to his ball-striking excellence but rather his grit, will power and toughness. This Masters appearance seemed improbable even a few weeks ago. But there he was Thursday morning, with a pronounced limp, with his game face on.

Over the past year Woods has talked about how grateful and thankful he is to be alive, to be able to play with his kids, to be able to continue his career, and yet less than an hour before his tee time, he appeared as locked in as ever, breaking character only once, to embrace a giddy Bryson DeChambeau. On the range Woods posted up 5 feet away from Joaquin Niemann, one of his early-round playing partners and a rising star who only two months earlier Woods presented the winner’s trophy to at the Genesis Invitational. This time, Woods didn’t even acknowledge him. Now, they were opponents. Now, Niemann was just one of 90 players Woods had to beat.

Needing to pace himself, he warmed up for only 22 minutes. Occasionally, he’d stop to towel off his face, or to consult on a wind direction with caddie Joe LaCava, or to give his ailing leg a break. About halfway through, he popped something into his mouth and took a swig from his water bottle. With clunky contact and quick-left misses, the session didn’t inspire much confidence.

But he returned to what his father, Earl, once asked him: Did you accomplish your task in a warmup – did you warm up?

“I said, yes,” Woods said. “Now go play. That’s exactly what I did. Let’s just go get it done. You know where to put it. Execute each shot.” 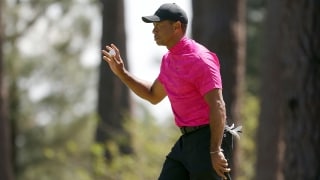 Tiger Woods made his first birdie of the Masters Tournament by nearly holing his tee shot at the par-3 sixth hole.

And so began a courageous round when Woods flashed some vintage iron play to set up his three birdies, but he also scrambled like mad to post a sub-par round that left him only four shots off the early Masters lead – a remarkable achievement given the course conditions (slowed by 3 ½ inches of rain), the weather conditions (20-mph gusts) and, of course, the condition of his rebuilt right leg (screws, plates and rods).

During four of his five Masters victories, including in 2019, Woods opened with a round of 70; the other time he shot 74 and rallied.

Other than consecutive rifle shots into the fifth and sixth greens, little was aesthetically pleasing about Woods’ first official round in 17 months. He teed up the ball straight legged, like a senior-tour regular. On the greens, he didn’t go into his familiar crouch behind the ball; he could only lower about halfway down, bending at the hips. He didn’t have quite the same pop off the tee, hitting a couple of high spinners and averaging just 288 yards. On a gusty day, he found only half of the greens in regulation. But he was rock-solid on the greens, preserving his round with momentum-saving pars on Nos. 1, 9, 10, 11 and 18. 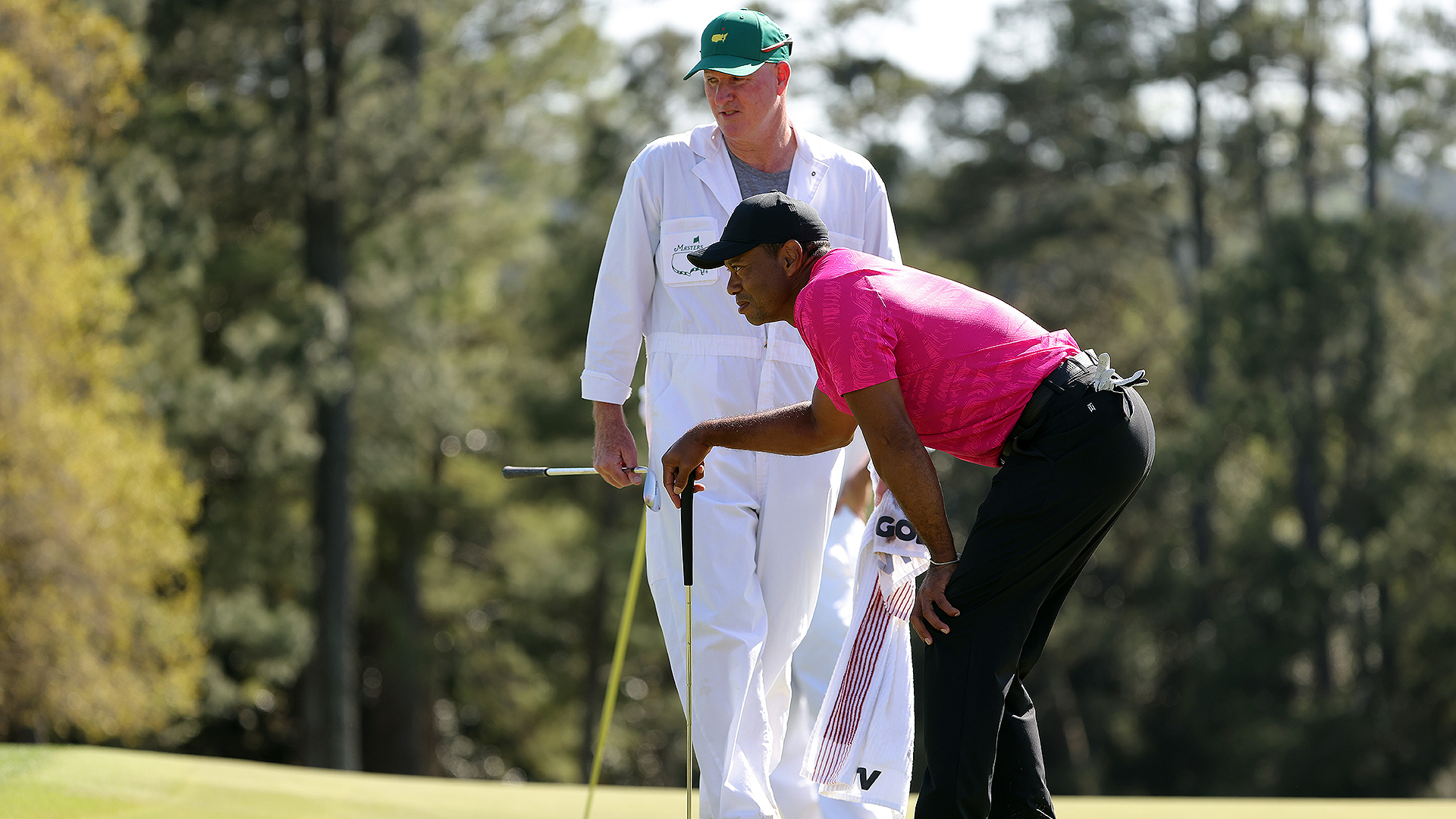 Up and down Augusta National’s notoriously hilly terrain, Woods mostly walked alone, away from the group, eyes cast downward, like a marathoner approaching mile 24.

The dramatic scenes were reminiscent of Woods’ gutsy U.S. Open victory in 2008, when he teed it up at Torrey Pines despite torn ligaments in his left knee and stress fractures in his left leg. Testing his body before that event, Woods strapped on a knee brace for a nine-hole practice round but lost more than a half-dozen balls and didn’t break 50. He ditched the brace, vowed to play regardless and had all-nighter treatment sessions in which he slept on the massage table and had his knee drained, iced, elevated, worked out and activated. He won, incredibly, in 91 holes – and eight days later, underwent season-ending reconstructive surgery.

Ever since, it seems, pain has been a constant accompaniment to Woods’ performance. There have been issues with his neck and his Achilles. His wrist and his other knee. Medically, he had a Hail Mary back fusion surgery in 2017, but even that second chance was compromised by his single-car crash last February. That sent him on an all-too-familiar path: recovery, rehab, return.

“We haven’t taken a day off since I got out of the bed after those three months,” he said. “Granted, some days are easier than others. Some days, we push it pretty hard, and other days we don’t. But we’re always doing something. So it’s a commitment to getting back, and it’s a commitment to getting back to a level that I feel that I can still do it. I did something positive today.”

After Woods rapped in a 6-footer on the last – a miraculous par given his tee shot clanked off the trees and didn’t even reach the fairway – he raised his right hand as if to say, I did it. Then he doffed his cap as the patrons gave him a standing ovation. Near the clubhouse, his agent, girlfriend and right-hand man all embraced. They’ve seen his mangled right leg. They’ve seen him at his worst.

“To see where I’ve been, to get from there to here,” Woods said, “it was no easy task.”

And so, 18 holes into this major marathon: Now what?

Anything and everything to flush out the swelling now, then warmed up and activated for Friday: Treatment. Massages. Ice baths. So many ice baths, he said, that he’s “basically just freezing myself to death.”

His second-round tee time loomed in 20 hours. The work was just beginning.

“My team has been incredible at getting me into this position so that I can compete,” he said.