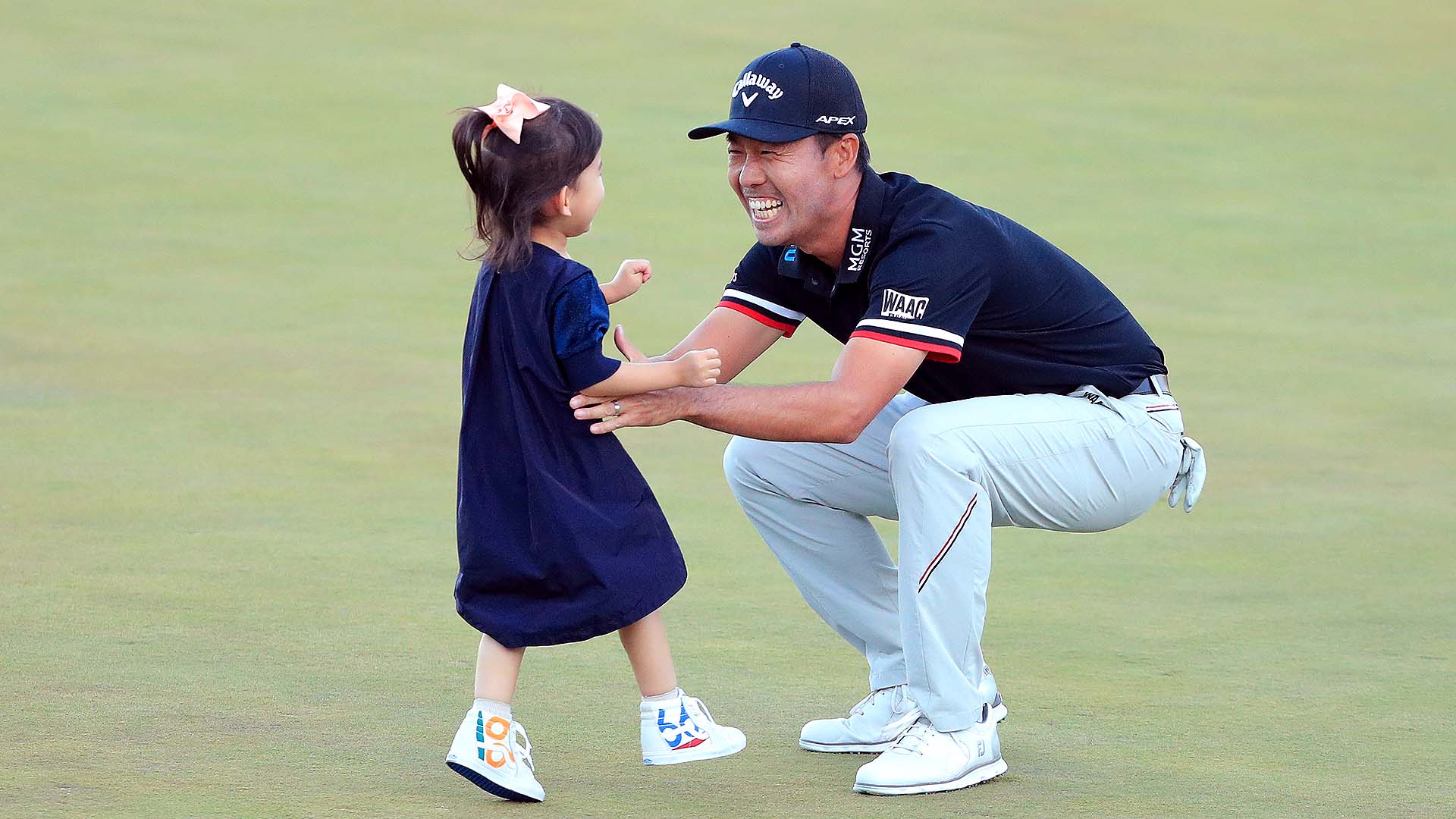 LAS VEGAS – Kevin Na had already made 569 feet worth of putts through 73 holes at TPC Summerlin.

And now, following a Patrick Cantlay three-putt for bogey, only 4 feet separated him from victory.

Na has become rather famous on Tour for reaching down to pick his ball out of the hole before it even drops.

But on this occasion, he simply stepped back and threw his arms in the air.

Na won the Shriners Hospitals for Children Open on Sunday, defeating Cantlay with a par on the second playoff hole. This is his second Shriners title, following his breakthrough in 2011. It took him another seven years to win again, but Na has walked away with a trophy three times in the last 15 months: last July at The Greenbrier, this past May at Colonial and once more at Summerlin on Sunday.

To put it in perspective, Na amassed a grand total of one win in his first 369 starts on the PGA Tour – and he’s racked up three more in his last 30 events.

“I feel like I’m finally in my prime,” the 36-year-old told GolfChannel.com late Sunday as he exited the media center.

In addition to the victory, Na made history this week, rewriting the Tour’s record book. His 558 feet and 11 inches of putts made in regulation are the most holed by any player in a single event since the Tour began tracking such stats in 2003. Ben Martin had set the previous record of 551 feet, 2 inches at the 2015 Charles Schwab Challenge, and Na passed him with a 23-foot save for par at the 17th hole and that kept him tied for the lead.

“I was just grinding, grinding everything I can to make that putt,” he said. “I'm sure my emotions showed that.”

That Na willed in that putt and walked to 18 with a share of the lead was stunning when judged against everything that hadn’t gone his way since he made the turn. Three clear headed to the back nine, Na tripled bogeyed that par-4 10th when his third shot trundled over the back of the green, his fourth shot raced by the hole and he three-putted from 60 feet.

“As good as I was playing, there was no doubt I was going to win. And then I felt like I had a decent chip, and I thought it was within five feet for a par. I see the ball slowly rolling over the green, and then all of sudden I walk out with a triple,” he said.

He was still clinging to a one-shot lead when he arrived at the reachable par-5 16th, where his second shot landed on the bank short of the green and hopped back into the water. With a two-shot swing from his bogey and a Cantlay birdie, Na appeared down and out.

But thanks to the save at 17, a delicate up-and-down at 18, a birdie on the first playoff hole and that final par, Na survived a roller coaster of a back nine only to board a roller coaster of emotion. He was immediately greeted on the green by his wife Julianne and young daughter Sophia. Na’s newborn son Leo was back at home, still too young to come out and celebrate.

Instead, it was Na’s father Yong who was present to see his son win for the very first time. Na found him off the side of the 18th green for an embrace, as the two men nearly toppled over into the collection area.

“My mother has seen me win here,” Na explained. “[My] second win, Greenbrier, nobody was there. Colonial was wife and the baby. Then this week, everybody – my mother, father, wife, baby. Leo is at home, so he's kind of here, so it's okay.

“So everybody was here.”

Surrounded by his family and overcome by the moment, the celebration took a turn when a highly emotional Na shared this message in Korean during an interview on Golf Channel:

"To my Korean fans, for always supporting and believing in me despite all these false rumors, I want to say thank you. No matter what anyone said about me, I have been very happy. So as I kept my mouth shut, I feel like I showed you my feelings with my clubs today. Even as I bit my tongue, I have gotten to this point. Thank you to my fans again. I will see you soon at the CJ Cup."

Asked later to explain what he said, Na shortened up: “Yeah, I just said it took a lot of hard work. I thanked the fans for believing in me, cheering for me. Just sending a message back home.”

And asked later on his way back to the locker room if he could elaborate on his motivations, Na told GolfChannel.com: “I think I’ve said enough.”