Hank Haney filed a lawsuit in U.S. District Court against the PGA Tour Wednesday claiming that the circuit “improperly intimidated, enticed and threatened Sirius XM Radio” to have the radio host fired.

The lawsuit claims that Haney was terminated because the Tour wanted to “settle an old score relating to professional golfer Tiger Woods.” Haney’s dismissal stemmed from a comment he made during his show in May regarding the possible winner of the U.S. Women’s Open.

Asked by co-host Steve Johnson who he thought would win the event Haney said, “a Korean,” before adding, “I couldn’t name you six players on the LPGA Tour. Maybe I could. Well . . . I’d go with Lee. If I didn’t have to name a first name, I’d get a bunch of them right.”

Haney apologized for the comment and was initially suspended by Sirius XM Radio before ultimately being fired, which he claims “cost [Haney] advertising revenues that would have amounted to millions of dollars over the life of the agreement.”

According to the lawsuit, the Tour had “long attempted to disrupt and interfere in Haney’s business” following the release of his book, “The Big Miss,” in 2012 that chronicled his years as Woods’ swing coach. 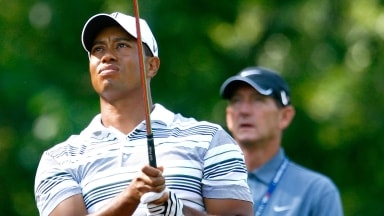