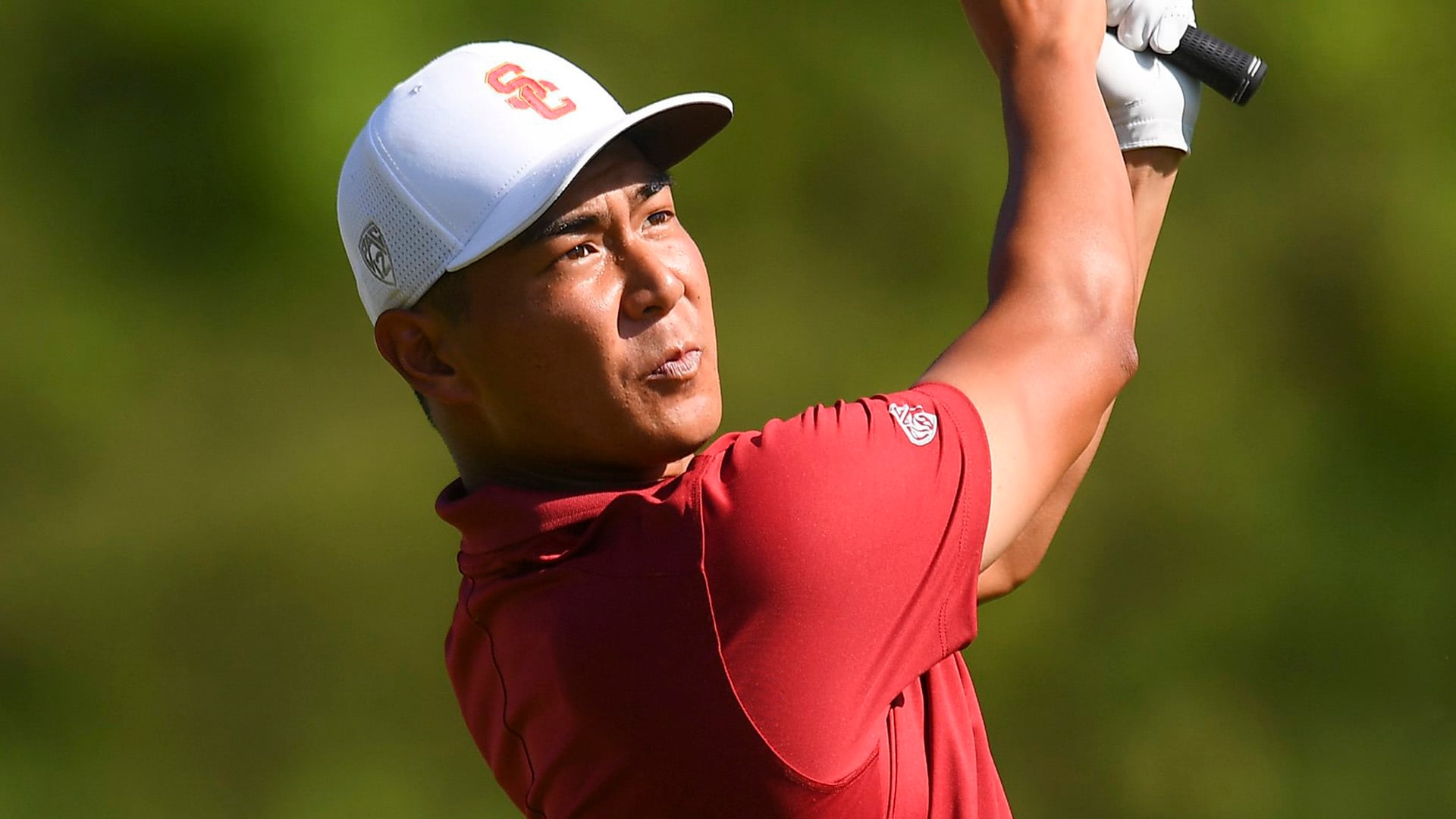 FAYETTEVILLE, Ark. – Upon stepping out of scoring Sunday evening at Blessings Golf Club, USC senior Justin Suh started jumping up and down while screaming, “Let’s go!” About a half hour before, South Carolina retreated to the parking lot in silence.

Two different moods highlighted the closing moments of the third day of stroke play at the NCAA Championship.

Suh’s closing par on the par-4 18th hole put the finishing touches on a 4-under 68 that sealed the Trojans’ ticket to Monday’s final round as the 15th-place team at 36 over. Just two shots back, the Gamecocks saw their season come to an end in heartbreaking fashion – two days before freshman Ryan Hall was handed a three-shot penalty for slow play, which proved to be the difference.

“It hurts,” South Carolina head coach Bill McDonald said. “We had a lot of golf to play and we didn’t play well. The three strokes are big now, but it happened in the first round and we had plenty of time to make up for it.”

USC, the ninth-ranked team in the country, was just one shot better than South Carolina after the first 18 holes, shooting a disappointing 16 over, and equaled that score a round later.

“I can’t say that I was sure we were going to be fine,” USC head coach Chris Zambri said.

Zambri’s substitution backfired as Kyle Suppa shot 80 in place of Sam Kim, but the gritty Trojans hung tough. Kaito Onishi shot 74 despite triple and double bogeys. Issei Tanabe was 4 over after three holes and 5 over at the turn before carding a 4-under 32 back nine.

And Suh, the All-American standout, made just one bogey as he delivered the late heroics to keep USC’s season alive. Suh hit 6-iron from 206 yards to 35 feet at the par-3 17th hole. At the time, he didn’t know where the Trojans stood.

“I noticed Zambri in a good mood, though, so I knew we were close,” Suh said.

Suh cashed in the lengthy birdie putt, and after hitting his approach to 25 feet at the finishing hole, Zambri came to him and said, “All you need on that is good speed.”

That’s when Suh knew he needed only par. He lagged closed and tapped home the short putt to ignite his teammates and coaches standing nearby.

“He’s been the most amazing player that I’ve ever coached,” Zambri said. “I’m not surprised.”

Now, the Trojans will have to regroup for another charge on Monday. They’ll enter the final round just eight shots back of eighth-place Clemson. The top eight teams after Monday make match play, which begins Tuesday.

USC will tee off in the early groups beginning at 11 a.m. Tuesday, alongside Cal and Auburn, two teams that ballooned Sunday morning only to see the field come back to them. The Bears are seven back of eighth while the Tigers are six behind.

“We get a chance to live one more day,” Auburn head coach Nick Clinard said. “The winds the supposed to blow, and hopefully we’ll go out and post a number and see what happens. They have some fight left in them and they’re going to go out tomorrow with something to prove.”

South Carolina will return Monday for Will Miles to face off against Georgia’s Trent Phillips and UNLV’s Justin Kim in a three-for-one playoff at 9:15 a.m. for the ninth individual spot in the final round. It will be a bittersweet morning.

For much of the season, pace of play is loosely enforced in college golf. At most regular-season events, there are no checkpoints. There is no timing. No penalties are handed out. There is not enough staff at these events to do so.

But when the postseason begins, things are different. Penalties are given after the second missed checkpoint. Four of them have been assessed so far this week, though none were more costly than the one given to the Gamecocks.

Hall went out in the first group Friday morning and his group missed three of the four checkpoints. Time par is 5 hours, 5 minutes on a 7,550-yard demanding Blessings layout, and Hall’s group finished their rounds just three minutes over. Hall and LSU’s Nathan Jeansonne were each penalized three shots. Texas A&M’s Dan Erickson was not.

“There were multiple times where the two of them (Jeansonne and Stachler) had times over 45 seconds,” said NCAA committee chair Brad Hurlbut.

South Carolina head coach Bill McDonald understands the rules in place, but he also believes the system is flawed.

“I respect the rules officials and everyone involved in the tournament and what they’re trying to do, but I’ve been around this game a long time and I believe things should be looked at with common sense and equity,” McDonald said “I don’t fault the people involved at all. I just wonder was the system, what happened to us, applied to the rest of the field?”

McDonald said he walked 16 holes with Hall on Friday. He said players were running between shots and he was raking bunkers to help speed things up. He also noted that Hall’s group was more than a hole ahead of the group behind them and had caught up to a group that teed off on the opposite side.

While the committee is transparent and clearly states the rules, many players are not used to them. (An example would be college basketball players playing all season without a shot clock and then having one in the tournament.)

“My point is, if we got three shots on that, why aren’t there shots flying all over the place?”

That is a fair question and one many coaches have asked. Unfortunately, it won’t be answered in time to save South Carolina’s season.