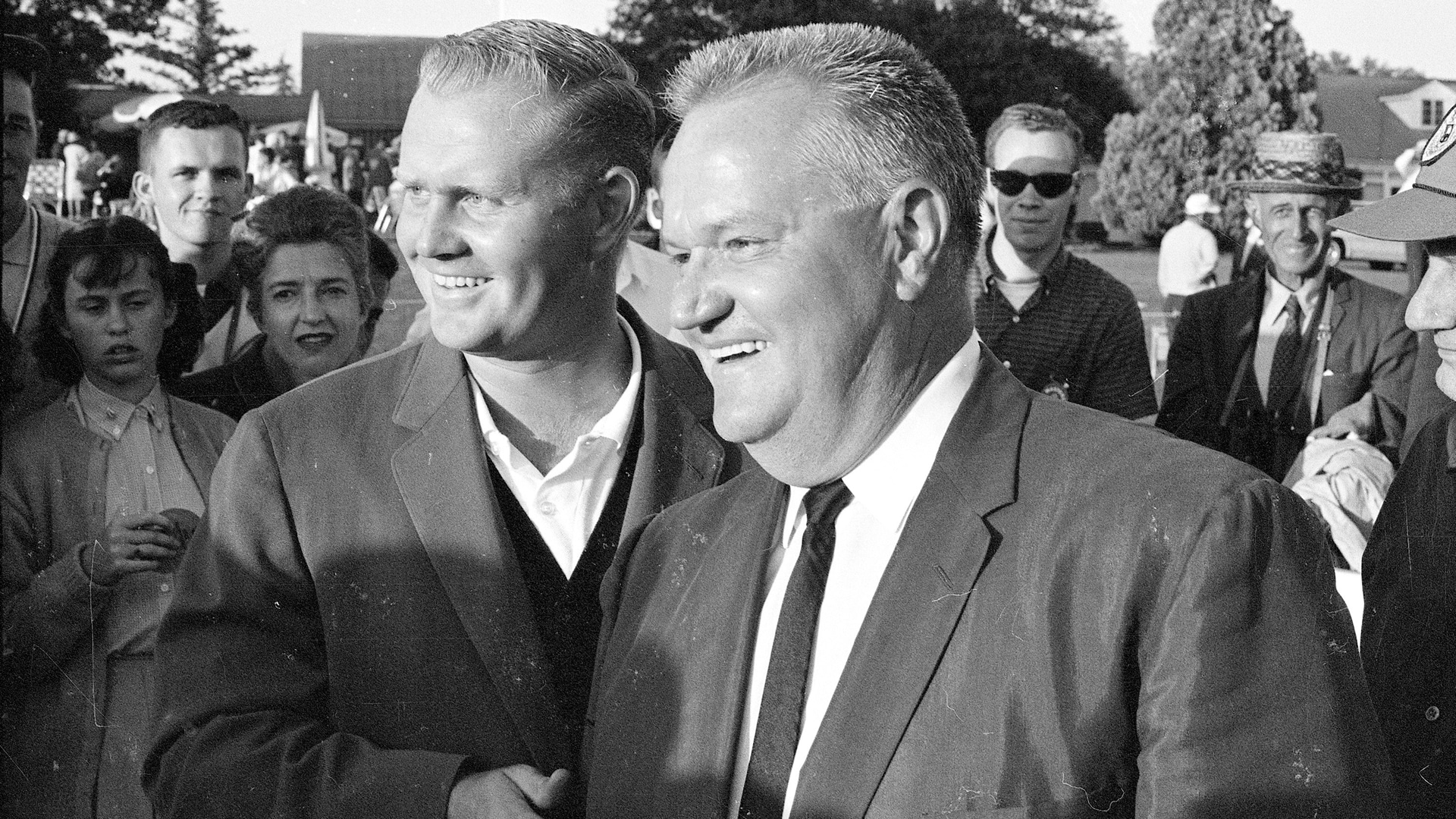 The story of how Charlie Nicklaus met Helen Schoener is not an uncommon one. They went on a blind date, it was love at first sight. Romantic, but not unique to love stories.

But then Helen moved from Columbus, Ohio to live with her aunt in Baltimore, Md. Helen had a scarring childhood and adolescence. She lost all of her family and moved to the East Coast because she had no kin alive at home.

But Charlie – and now this is where the romance really kicks in – wasn’t about to let that be the end of their relationship. He mailed Helen a letter asking her to marry him – along with an engagement ring inside.

“He said, 'I will always provide for you and you will never want for anything,'” their daughter, Marilyn, says. “He couldn’t live without her.”

Charlie not only took care of Helen, but her aunt and her aunt’s adopted children, as they all moved to Columbus.

Louis took the boys with him to work one day, where it was, conservatively, in excess of 120 degrees.

I don’t want this life for you, he told them.

And the boys listened well.

Charlie and Helen married in 1937 and had an apartment above Charlie’s tiny drugstore on Chittenden Avenue and High Street, near the Ohio State University campus.

Charlie had attended OSU and played various sports, including football, basketball and baseball. He encouraged his kids to be multi-talented as well.

He was the athletic one, the outgoing one, the life of the party.

“[Charlie] was one of the people who never met a stranger,” Jack’s wife, Barbara, says. “I mean, everybody loved Charlie Nicklaus.” 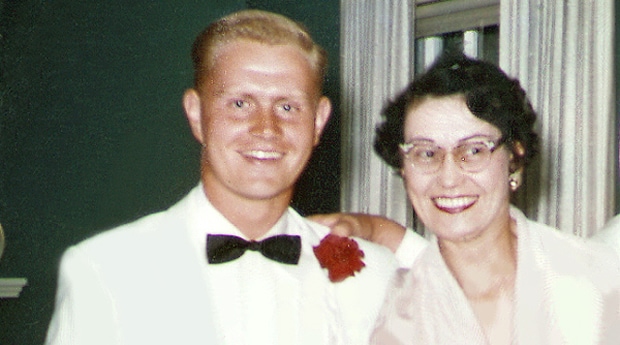 Helen was more reserved, more of a homebody. The loss of her family affected her life forever.

“She was scared of everything,” Jack says.

Jack would acquire traits from both – aggressiveness from his father, caution from his mother. It is evident in the way he played golf, shooting 65 when he needed to and shooting 73 when that was good enough.

When Jack was about 7, Charlie severely hurt his ankle playing volleyball. Jack had to help carry him into the house that day. It took a while to get a proper diagnosis and the ankle never fully healed. A doctor suggested he take up an activity that would allow him to walk, since he no longer had proper lateral movement, and get some exercise.

He decided on golf.

Charlie hadn’t played in 15 years, but it was the best option to follow doctor’s orders. And he got to spend time with his son, who carried his bag.

According to Marilyn, a man walked into his drugstore one day and asked where he could find a dentist. Charlie directed him a couple of blocks away, and a few weeks later the man returned and the two got to talking. The man said he was a member at Scioto Country Club and Charlie mentioned that he’d love to play out there.

The man put Charlie’s name up for membership, Charlie was accepted, the family moved out that way in the winter of ’49, and Scioto pro Jack Grout took notice of Jack Nicklaus in ’50. History's chain of events.

Jack and Charlie were inseparable, best friends. He was always by his son’s side during tournaments. Helen would try but she just couldn’t stand to watch Jack if he was playing poorly. She'd shield herself behind trees and look away.

Helen – along with Marilyn and Barbara, and, of course, Charlie – attended the 1957 Masters, Jack’s first time playing the tournament. She and Marilyn wouldn’t return until 1986, on a whim.

Charlie, however, was at all the big events. He had his gang of friends and they made the Masters a boys’ trips.

In the late-‘60s Charlie began to slip into that retirement phase. He and Helen got a house down in Florida, near Jack and his family. Charlie would take the boat out, fish and play with his young grandkids.

And then, in 1969, it was thought Charlie had hepatitis. Jack was just getting back from Harbour Town, his first course design, after Thanksgiving when a doctor hold him it was pancreatic cancer. Charlie had 6-12 weeks to live.

They thought it best not to tell Charlie immediately, to let him enjoy life for as long as he could. This form of cancer is nearly unbeaten.

Christmas 1969, the Nicklauses all gathered together. Jack and his family flew in from Florida.

“I can remember it was snowing,” Marilyn says. “My mom was frantic. She was so worried that something was gonna happen to that plane. My dad was upstairs, ill in bed, and she went up to him and she was just worrying and fretting. He said, ‘Sis [for Sissy, his nickname for Helen], don’t worry. The runways are all heated. They’ll be fine. She bought it and calmed down.”

It was a memorable evening, for many reasons. Ohio State head football coach Woody Hayes unexpectedly came by the house that night to chat. And that was the last time Charlie ever ate a meal.

"The only thing he could keep down was Gatorade. So that kind of kept him alive, the electrolytes,” Jack says. “Died Feb. 19.”

“Dad taught me the right way. He taught me how to be a good sport, how to make sure that if you lose it’s not the end of the world,” Jack says. “Your word is your bond. And you got to deal with what you’re dealt."

Forty-seven years later, Jack is asked how much he thinks of his dad.

Jack was going through a majorless drought, by his terms, when his father died. He hadn’t won one since 1967.

“I sort of looked at that and said, you know, my dad sort of lived through me and he enjoyed what I did. I don’t think I gave him a fair shake,” Jack says. “I wouldn’t say I was motivated by my dad’s death, by any means, but I certainly felt like you’re only here for a short period of time and you really need to give your best, and I did not think I gave my best during ’68, ’69. So I sort of focused myself back to playing.”

“I think every single tournament he won after his dad died was for his dad,” Barbara says.

Helen lived until she was 90, dying in August, 2000. In ’85, not sure how many more opportunities she would have, she told Jack she wanted to attend the Masters a final time. He said, let’s make it the next one.

Helen was there to witness her 46-year-old son win his sixth green jacket.

“That week was special. I think my mom being there was in Jack’s mind,” Marilyn says. “It was meant to be.”

Marilyn likes to say, it’s not what’s taught, it’s what’s caught. And she and Jack caught lots of love, which, in turn, has spread to their families.

Right after Charlie got out of pharmacy school, he had a sales job with Johnson and Johnson. He was offered a promotion to Chicago but didn’t take it. He wanted to raise his family in Columbus. Knowing the denial would end his career, he focused on using his degree.

“It was always about family,” Marilyn says. “Family was always first.”