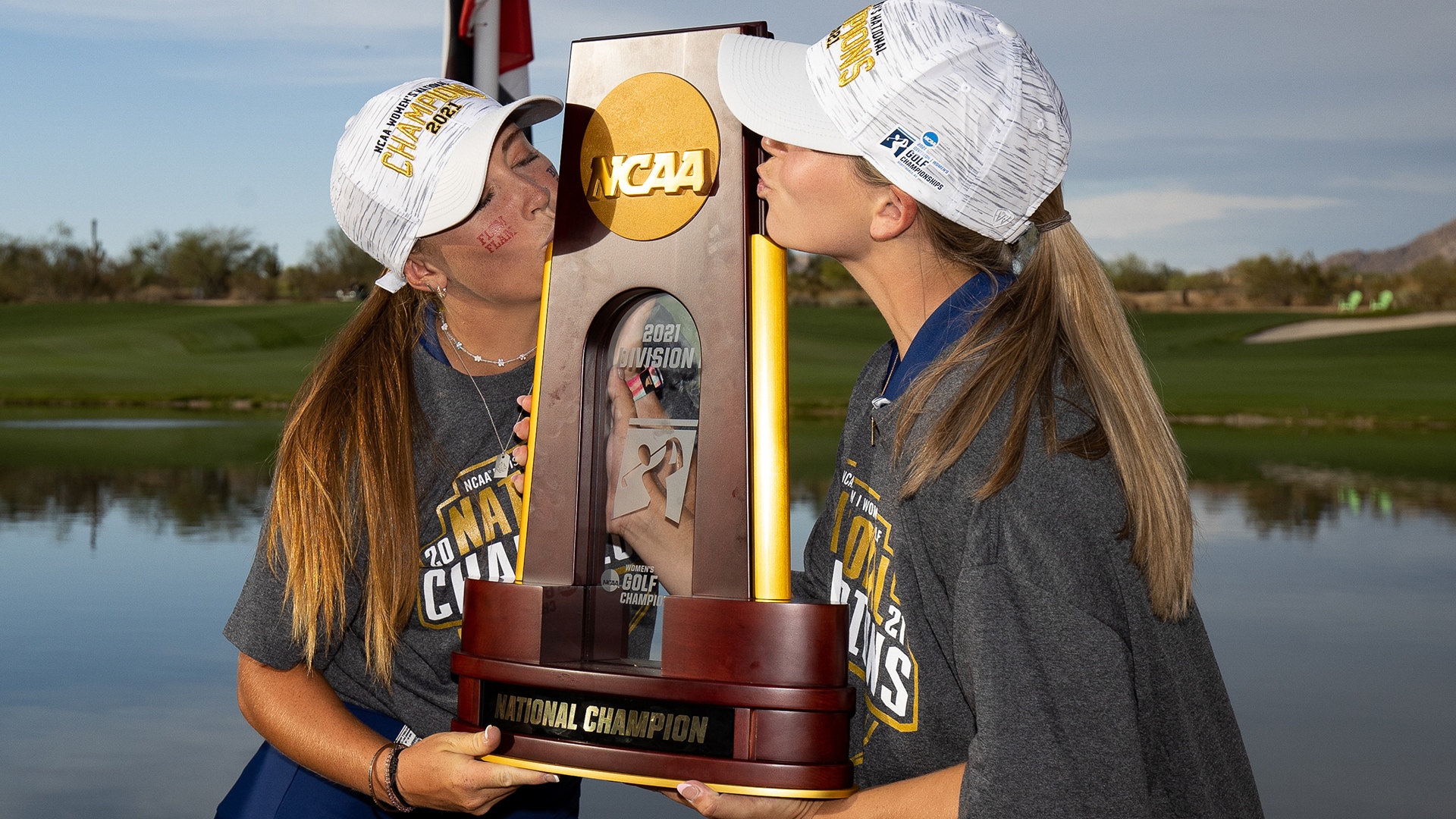 SCOTTSDALE, Ariz. – A few days before Julia Johnson arrived in Oxford, Mississippi, for her first semester at Ole Miss in August 2017, she jotted down a list of goals. The fifth and final goal on that piece of paper was written in all caps.

Johnson can finally cross that one off.

The Rebels senior helped deliver Ole Miss its first NCAA Championship – in any sport – with a convincing 4-1 victory over Oklahoma State in the Division I women's golf final Wednesday at Grayhawk Golf Club.

“I always believed that we could do this,” Johnson said, “and not a lot of people did.”

Johnson, of St. Gabriel, Louisiana, was initially destined to remain in state, verbally committing to LSU as a sophomore in high school. But her path changed shortly after Kory Henkes, a promising head coach from Augusta University, was hired to lead the Ole Miss women’s program in June 2015. Johnson had joined friends and Rebel commits Macy Holliday and Conner Beth Ball on the sideline for an LSU at Ole Miss football game that fall, and though a respectful Henkes kept her distance, she left a lasting impression on the young Johnson.

Hi, I’m Julia Johnson and I’d love to play for you.

“I basically begged her to let me come to Ole Miss,” Johnson said, “just because I wanted to be there and wanted to be with her so much.”

Together, Henkes and Johnson have built something special and unprecedented. Before fate led Johnson to Oxford, Henkes held her first team meeting and immediately laid out some lofty goals, including the expectation of winning SEC and NCAA championships.

“A couple of the girls looked around and laughed, like, Yeah, right, not here,” Henkes recalled. “So, I quickly learned I needed to change the culture and change us to a winning mindset. Did I think it would happen in six years? Probably not, but if you get the right people in place, good things happen.”

Johnson was the determined leader that the hard-working and passionate Henkes needed to ignite the program when she joined the team two years later. In her first season, Johnson was named SEC Freshman of the Year and then fired a closing 67 at regionals to lead Ole Miss to its first-ever NCAA Championship appearance. However, the Rebels finished last, a sign that Henkes’ program build was not yet complete.

Enter Kennedy Swann, the wild personality from Austin, Texas, who after five semesters at Clemson was desperate for a new home. Unsurprisingly, Ole Miss was at the top of Swann’s list, but the interest wasn’t initially reciprocated. There were plenty of red flags.

“I was extremely immature,” Swann said. “My golf game sucked. My putting was horrible. I didn’t really know what I was doing.”

Henkes questioned if Swann was a good fit, and at first told her no. But she eventually changed her mind, albeit offering Swann an ultimatum: You mess up once and you’re done.

Swann never messed up. She channeled her endless energy into unwavering positivity, becoming the yang to the level-headed Johnson’s yin. Her game improved, too, and in her first semester with the Rebels, she went 3-0 in match play at the 2019 SEC Championship to lead Ole Miss to its first conference crown. Later that season, the Rebels made strides at the national championship, tying for 14th.

And danced with her when she’s wanted to dance.

Before Wednesday’s pressure-packed final in the desert, the Ole Miss players busted out their best moves in Grayhawk’s parking lot. There was plenty to celebrate already:

Navigating a pandemic-affected season without a single positive test.

Winning twice and entering a third straight NCAA Championship as the fifth-ranked team in the country.

Taking down Texas and Arizona for the opportunity to play for a national championship. That first scalp was a thriller that featured two extra-hole victories, including the 21-hole clincher by freshman Smilla Sonderby, the spring arrival who had only logged six stroke-play rounds before subbing in for Hume, who has battled bicep tendonitis for months and barely got through 18 holes at Grayhawk.

All that was left was to go win the dang thing.

Ole Miss athletic director Keith Carter, a former All-American basketball player for the Rebels, described Henkes’ team as reflecting the best attributes of its coach, who is also a mother of two kids under the age of 3: Gritty, tough, fiery. That was on full display all week, including against the Cowgirls, who were also trying for history, hoping to become Oklahoma State’s first women’s national champion at a school with 52 men's titles.

Tamburlini got Ole Miss on the board first. Still fuming from giving up a 3-up lead and losing her semifinals match, the sophomore jumped on Lianna Bailey early and never let up in a 6-and-5 victory. It was a dominating performance by a player who almost wasn’t able compete this postseason.

After the SEC Championship, Tamburlini started experiencing severe dizziness, vomiting and even bleeding in her ears. Doctors determined her to be suffering from labyrinthitis, an infection of the inner ear. She wore a headband over both ears for much of the week, though midway through her rout of Bailey, she took it off. She was feeling much better.

Swann then earned the second point, going out first against probable first-team All-American Maja Stark and winning, 2 and 1. Swann capped her match by sticking her approach to gimme range at the par-4 17th hole. Stark quickly grabbed Swann’s ball and tossed it over in the rough before missing a putt to stay alive.

The clinching point had then become inevitable. Sophomore Andrea Lignell was coming up the penultimate hole with a 2-up lead on Isabella Fierro while Johnson was 4 up against Rina Tatematsu with four to play. Lignell ended up sealing the deal with Johnson and her opponent on the 15th green.

Upon hearing official word that it was over, Henkes turned to Johnson, the player most responsible for the Rebels’ rise, and said, simply, “We’re national champions.”

Over at the 17th green, the rest of the Ole Miss players were frantically searching for Johnson, making a brief dash through the desert only to end up back where they started. Moments later, they saw Johnson running toward them down the 17th fairway with Henkes close behind.

They met in the middle, and celebration ensued with the surprisingly large Ole Miss contingent. Carter had flown in that morning along with several others, including Glenn Boyce, the university’s chancellor, and Chris Malloy, the Rebels men’s golf coach. Henkes’ husband, Kenneth, was also there to witness history.

Before Wednesday, no Ole Miss sports team, men's or women's, had won an NCAA Championship. Football claims three national titles, in 1959, 1960 and 1962, though those come with an asterisk. And only two programs had previously competed in an NCAA final, men’s tennis in 1995 and air rifle this year.

“This sets the tone for our department,” Carter said. “We talk all the time about winning championships; we don’t want to just show up. They validated that today.”

Also among the crowd of Crimson and Yale Blue were two past Ole Miss student-athletes. Ronald “Goldie” McClendon and his wife, Jade, were both two-sport stars for the Rebels who graduated in 2004. Ronald played football and ran track. Coincidentally, Ole Miss beat Oklahoma State in the Cotton Bowl his senior season.

Jade, meanwhile, was a volleyball standout but also is part of the Rebels women’s golf family. When she was in school, the idea of this program winning a national title was a pipe dream. McClendon, then Polonich, and her teammates didn’t have a multi-million-dollar practice facility back then. Heck, they didn’t even get their own clubhouse until her final season.

The McClendons, who live in Scottsdale and followed the final match along with their 7-year-old twin boys, Tayo and Niko, gave the Ole Miss coaches and players good-luck bracelets before the final. They worked.

“It’s like a sisterhood,” Jade McClendon said, “and when you know the grit that these girls have put forth to be in these moments, it’s just amazing. I feel like a proud mommy.”

Henkes was overwhelmed by the support.

Swann couldn’t hold back the tears, either. Not only had she capped her Ole Miss career by winning it all, but Johnson, a likely first-team All-American, had decided to forfeit the exemption she had just received into the Marathon LPGA Classic this July and pass it on to Swann, who plans to turn pro and compete in Q-School later this year.

“That was so selfless of her,” Swann said. “That means the world to me. That’s going to be a huge help for me in my pro career."

As for Johnson, she has no plans of making the jump to the play-for-pay ranks any time soon. She's returning to Ole Miss for an extra year, and with a new goal: