Kuchar-caddie controversy not black or white or anyone's business

On March 4, 2015, Matt Kuchar was at the Miami Heat’s half-court line to raise $25,000 for the United Way. He missed the shot – and then ponied up the $25,000 for the charity, himself. Donations like these, from rich professional athletes, are often followed by the detracting judgment that the money meant nothing to them. The altruism tainted by the belief that since athletes often get money for just “showing up,” their charity is in some way lacking, because it wasn’t “earned” and didn’t come from the heart. Even if that were true, would it matter to the person who received the donation?

The Sin of Doing Good Deeds, the subject of a 2008 New York Times article, told the story of Daniel Pollata, who ran a for-profit company that raised more than $300 million for AIDS research. He paid himself $400,000 a year as head of the company. When the public became aware of his yearly income, outrage ensued and his company went out of business. Even if it was wrong for him to make such a salary, does it matter to those whose research was greatly improved by the hundreds of millions of dollars from his work? Does it matter to those with AIDS?

Fomented by the increasing belief that it is unethical to be hugely successful, tainted altruism is a form of jealousy directed at those who have been rewarded for work well done with wealth or fame – or both – in hopes of reducing them to a state of ignominy.

Which brings me back to Kuchar. 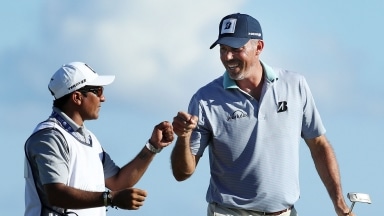 The initial outrage that Kuchar might have paid his fill-in, local caddie $3,000 when he won the Mayakoba Golf Classic – and not the regular Tour caddie norm of a salary, about $3,000, plus 10 percent of the winner’s share – was stoked by a typical few on social media. The few who want to be viewed as heroes in search of wrongs, but who then conquer little dressed-up lies.

It came to light that Kuchar and his substitute caddie, David “El Tucan” Ortiz had an agreed upon salary prior to the start of the competition, that was acceptable to both parties. If that had not been the case, why would either of them have proceeded? But Kuchar, despite winning the event and almost $1.3 million dollars, appears not to have paid Ortiz a bonus. If this is true, is it an indefensible slight?

In Mexico, depending upon the source, the average weekly salary is $285. Ortiz makes a reported $200 a day – six days a week – being a caddie at Mayakoba, about four times the average weekly salary. Assuming he was idle for a week as the Tour took over his course, he would have been out $1,200. But he was, by all accounts, paid at minimum $5,000 – not the initially inferred $3K – roughly four times his average salary and around 17 times the average salary in Mexico. One can easily see why he would be inclined to enter into such an agreement with Kuchar. It was by any definition, a good week for him.

That Kuchar did not pay Ortiz the normal Tour caddie bonus is hardly news. When a local caddie is picked up at a Tour event, this is not that unusual. The percentage that Tour caddies make is to properly compensate a lifetime on the road – both for the inconvenience and the expense – and to offset the weeks when their player misses a cut and the fact that they can be fired at a moment’s notice.

But regardless of what arrangement was made between Kuchar and Ortiz, should it be of concern to anybody to what salary an employee and an employer agree? No. A third party, unless invited, has no business getting in the middle of contract negotiations between two people, who will, of their own accord, either find acceptable terms or walk away.

It was tweeted numerous times that Kuchar had a history of being cheap and a few caddies contacted me to expound on his stinginess. Asking for details, I was told that after one of Kuchar’s wins he met up with a few players and caddies for dinner. When the bill came, he had the audacity to only pay for his share. No doubt if he had paid for the whole table he would have been deemed a helluva guy with a great sense of generosity, but the fact that he paid only for himself – and a few at the table thought they were entitled to a free meal – made him cheap in their eyes. I understand picking up a check goes a long way toward good will, but is there no place to exist between generosity and villainy?

There is plenty of evidence to suggest that Matt is not stingy with his time or his money. He and his wife, Sybi, have for years given their time and support to a camp for children with various handicaps. In 2018, alone, Kuchar’s support enabled Camp Twin Lakes in Georgia, to provide week-long therapeutic camping experiences for 90 children with serious illnesses, disabilities and other life challenges. One of the campers, Noel Reese, a 14-year-old who has epilepsy and loves golf, said of Kuchar that he inspires with his commitment to the camp and that he has a heart of gold.

I’d argue that those who want to taint the altruism of Matt Kuchar with a little dressed-up lie, misstating the specifics and circumstances of the labor-and-payment agreement and misleading many about him, are like the old man who dips a glass into the ocean and pulls it up for everyone to look at, and then proudly says that it is proof there are not sharks in the sea.