Monday Scramble: Why The Match flopped and who can save it 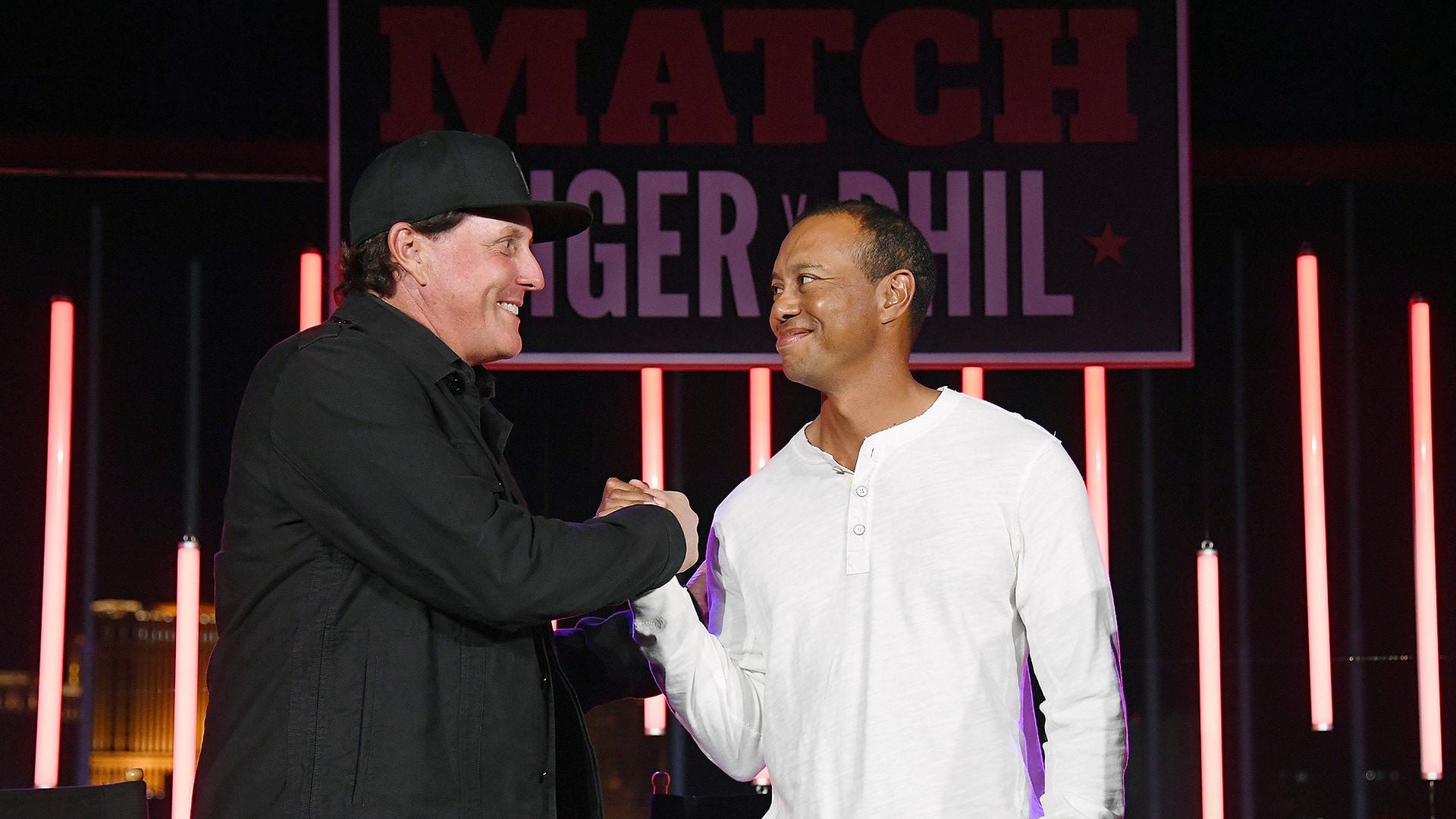 In this Match-heavy edition of Monday Scramble, we look at why and how it flopped, who can save it, and what it means for golf PPV events:

After months of relentless hype and promotion, Tiger Woods and Phil Mickelson played The Match last Friday, and by almost any measure it was a bust.

The two stars weren’t particularly sharp. The trash talk was virtually nonexistent. The PGA Tour ruined the gambling aspect by limiting the number of side bets. Tournament officials used a gimmicky playoff hole to determine the $9 million winner. And the PPV model broke down once the streaming platform failed, leading Turner Sports to issue refunds to anyone who paid the $19.99 fee to watch the nearly five-hour match.

They still should try this thing again.

No one in their right mind would drop $20 for a rematch or second iteration, but Tiger and Phil are clearly invested in trying to make this work, and one failed attempt shouldn’t be enough to deter them. There are ways to improve the product – more on that below – and a few more matches in 2019 will offer a better idea of whether there’s a future for these PPV events. 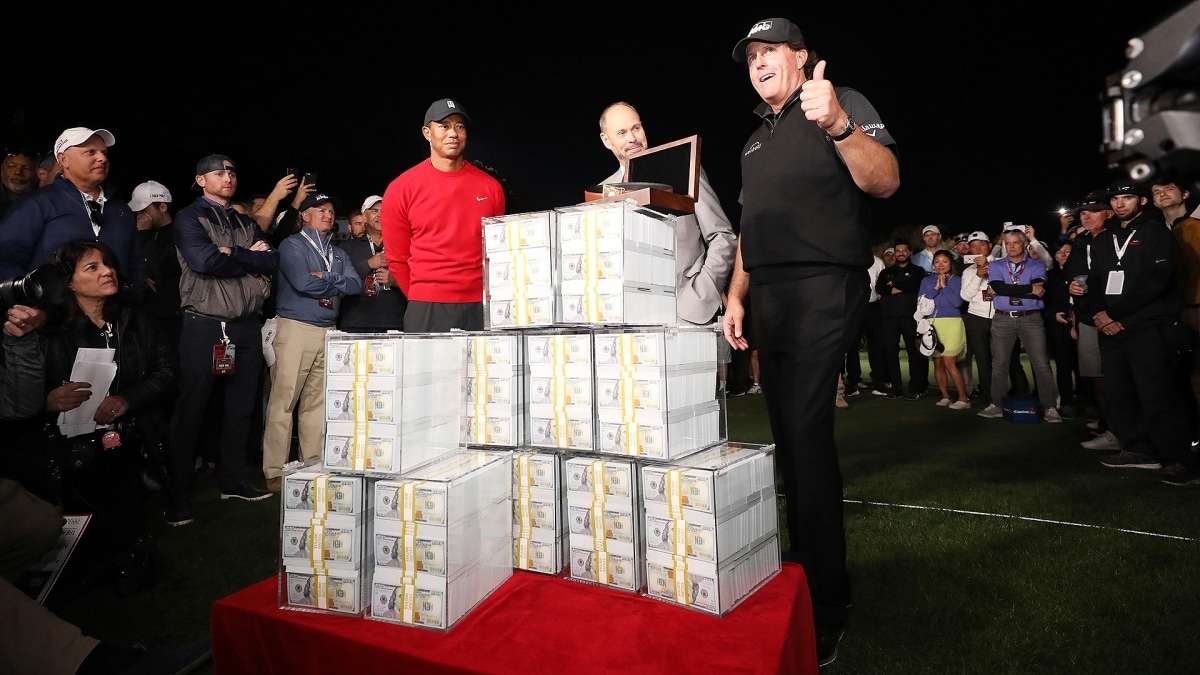 1. Let’s start with the winner: Mickelson, who knocked a wedge tight on the 22nd hole and made the 4-footer for the $9 million (allegedly) winner-take-all prize.

Mickelson didn’t play particularly well, as both he and Woods shot 3-under 69 on a benign Shadow Creek setup. But the whole scene and a finishing hole like the 93-yarder they set up was right up his alley.

Lefty also came out ahead in the side bets, collecting $600,000 total off Woods, which he donated to the Children of the 58 Fund and the Las Vegas Shriners.

Now that that’s out of the way …

2. It’s time to focus on the participants.

Mickelson is a natural showman. He likes performing in front of crowds and wowing his playing partners. He doesn’t mind woofing when he hits a spectacular shot, and he’s playful when he doesn’t pull it off.

There’s absolutely no one in golf who is as well-suited for PPV golf than Mickelson.

His opponent? Not so much. It’s not Woods’ strong suit. Never has been. Never will be. He’s a grinder who isn’t wired for these big-money chucklefests, which are more about entertainment than competition.

Once Woods started hitting a few wayward shots, he retreated into his usual grind mode, and The Match fizzled out. It became just a golf match between two players who are well past their prime.

The PPV model probably can't survive without Woods' participation, but the quality of the product would be markedly better with a more engaging crew around Mickelson. An example: Phil with Rickie Fowler, Jordan Spieth and Justin Thomas. That'd have a more Tuesday-practice-round vibe, and it'd be more compelling TV.

3. Of course, the PPV model can’t survive if there’s no broadcasting revenue, either.

Over the weekend Turner Sports said in a statement that it’d issue a refund to those who paid the $19.99 fee to stream the event on Bleacher Report Live. Other carriers also announced that they would not charge the customers who paid for the event, either through credits or refunds.

Either because of FOMO [Fear Of Missing Out] or social-media interest, many went to the B/R Live homepage just minutes before the match started and received an error message. The technical issue forced the company to allow live streaming of the broadcast online for no charge.

One word to describe golf’s first foray into pay-per-view: Embarrassing.

4. The PGA Tour didn’t do The Match any favors, either.

The Tour set up the parameters for the made-for-TV event, and that included limiting the number of side bets. In all, the side action included $800,000, which went to the players’ various charities.

But the “challenges,” as they were called on-air, were lame. They were predictable – closest-to-the-pin contests, and a long-drive contest on a par 5 – and accompanied by some awkward, contrived negotiation on the tee.

These two have combined for more than $200 million in on-course earnings. That they weren’t betting on almost every single shot – even for just a few thousand – felt strange. 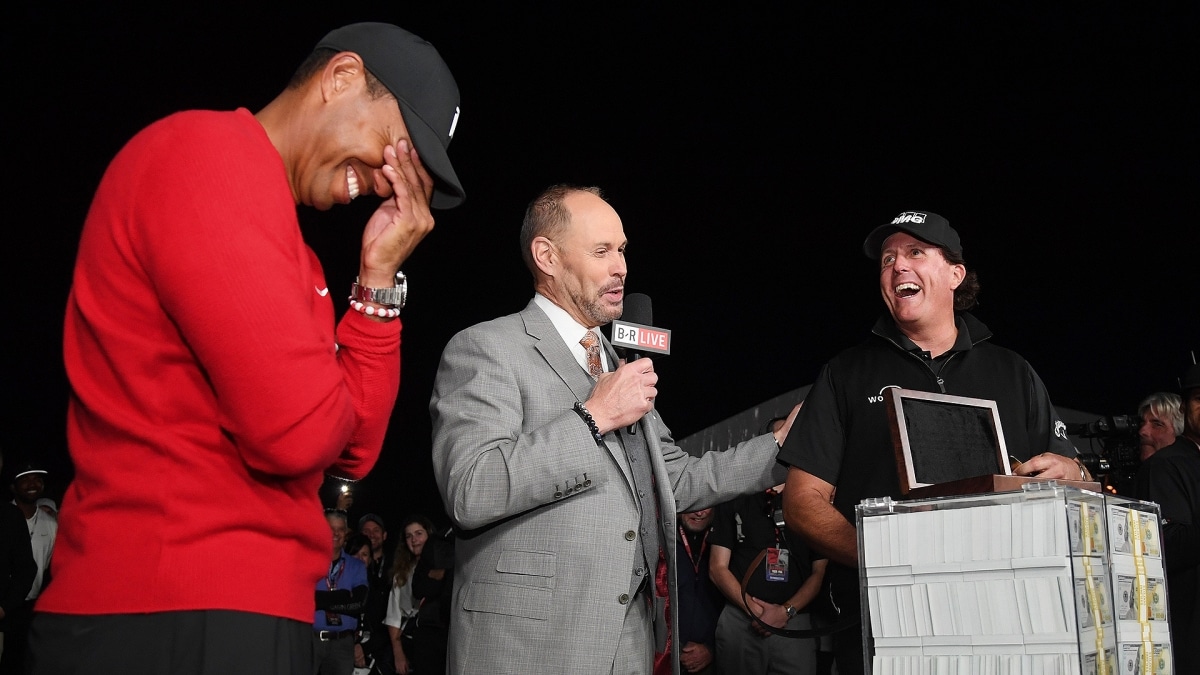 5. Other thoughts on The Match:

• The broadcast, for the most part, was dreadful. The broadcast teams infuriatingly talked over player-caddie conversations. The much-hyped drone shots were few and far between. The Toptracer looked as though it was hand drawn. There was no green-reading technology. Billed as a one-of-a-kind golf broadcast, it felt disappointingly familiar – if not worse than usual.

• Those generous gimmes late in the match? It only led to speculation that those two had already split the pot or come up with some other arrangement for the payout. No one wants to watch a 4-foot miss to end it, but this felt like more than just sportsmanship.

• The participants rarely walked together to their balls or after holes were completed. That can’t happen. Even if the interviews are forced, the two stars need to interact, to play off each other, to remember that this is supposed to be entertaining and offer a glimpse into their mindset like never before.

• Charles Barkley – part of TNT’s basketball coverage and a pitchman for Capital One – should be featured more prominently moving forward (assuming there are more matches). Though he’s not savvy enough to carry an entire golf broadcast, he brought some much-needed levity to the proceedings. Event organizers should fully embrace the lunacy of the unique event and have a small broadcast team that reflects it.

• Where was the swearing? Sure, this was a family-friendly event and these guys represent multimillion-dollar empires, but Tiger uncorks F-bombs in low-stress practice rounds. This thing was so tame it could have been aired on PBS.

• Which brings up another point: It seems the guys saved all of their awkward, G-rated trash talk for the press conference. Other than Woods’ “good speed” quip after Mickelson cozied his $200,000 putt on the opening hole, there was almost no banter from two of the game’s preeminent needlers. Mickelson didn’t make a peep after Woods missed a 3 ½-footer on 2, or when he flared a few drives wide right. Woods didn’t say anything, either, after Mickelson left a 10-footer short to win the hole. They had promised some A-grade smack and didn’t deliver. Disappointing. 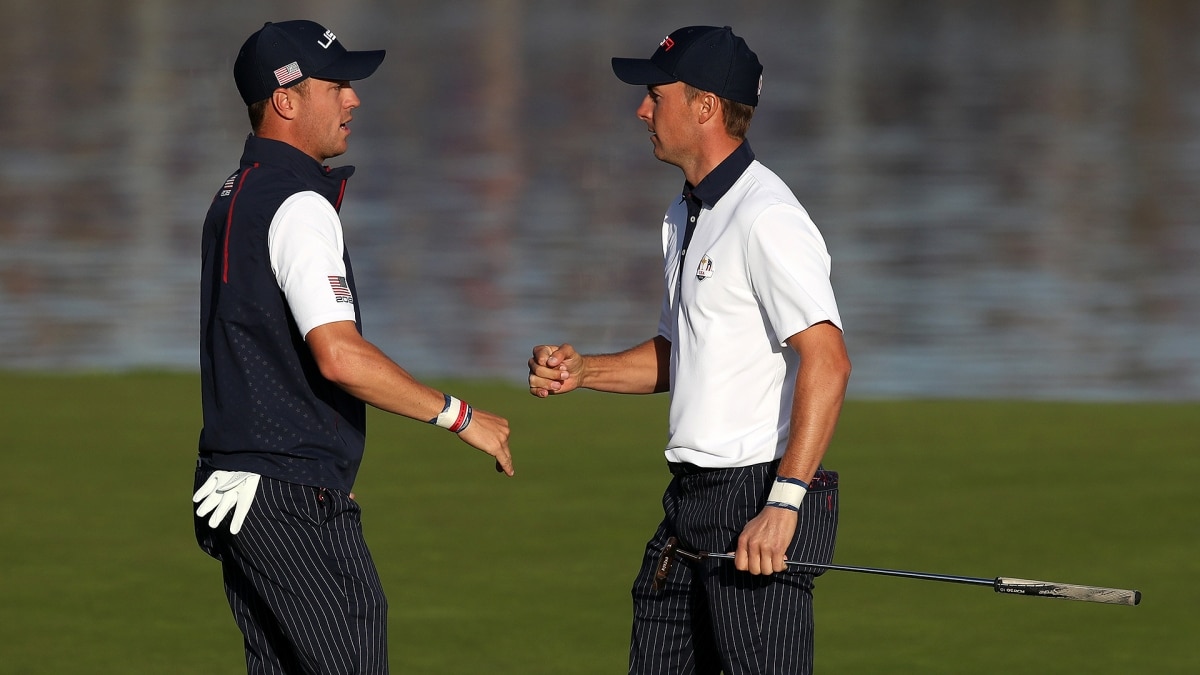 6. There’ll almost certainly be at least one more match – Woods and Mickelson didn’t set up a shell company for a one-time deal.

So who can save this thing?

Woods has to be a part of The Match II, even though Mickelson would be better served with a livelier crew around him.

For the next edition, we’d pair Woods with Thomas and have them go up against Mickelson and Spieth. Big-name players. Generational ties. Good talkers. Done.

Or, if they insist on a rematch between Woods and Mickelson, then they desperately need a few undercard matches, if only to fill some airtime.

No one else brings enough juice to justify a PPV.

As much as fans will clamor for Spieth vs. Patrick Reed, it’s hard to see Woods having Reed be a part of this production, especially after Reed threw him under the bus following the Ryder Cup. 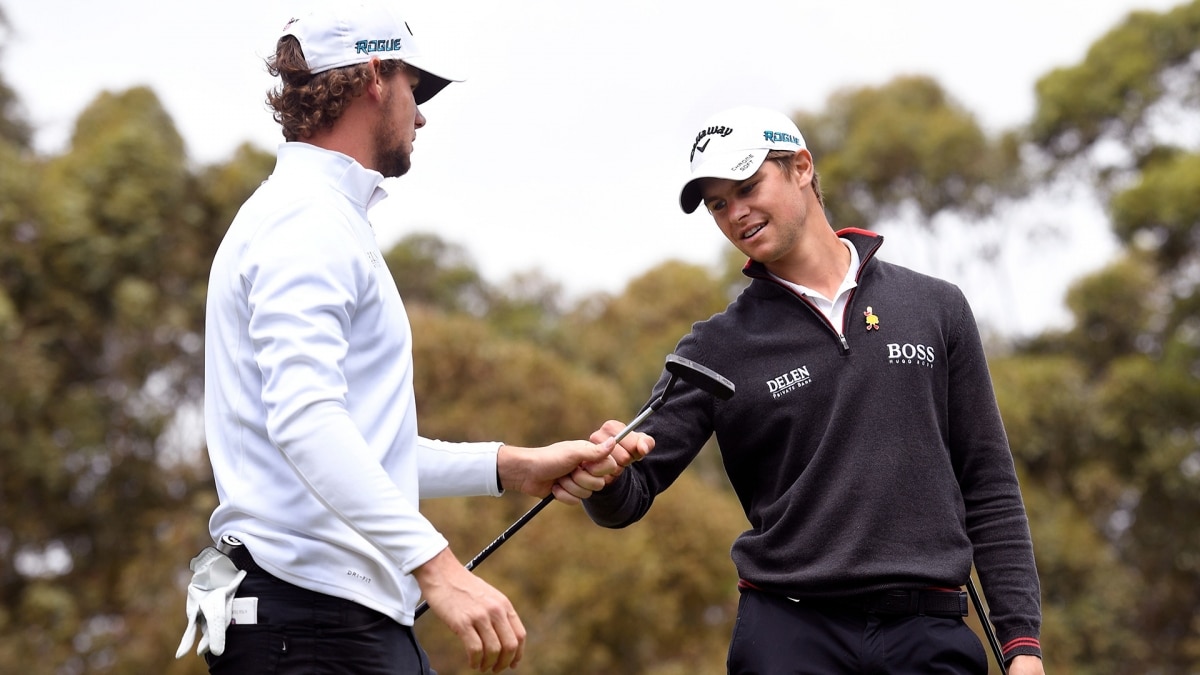 They held at least a share of the lead after each of the last three rounds to hold off teams from Mexico and Australia.

The American duo of Matt Kuchar and Kyle Stanley finished in a tie for 16th (out of 28), 14 shots behind the winners.

8. Ho-Sung Choi – who became famous on Golf Twitter for his unorthodox swing, and apparently is now known as “The Fisherman” – found his way back into the winner’s circle on Sunday, capturing the Casio World Open. It was his second career Japan Tour victory, but this is the only one that was noticed at large by the golf world, which has been captivated by his viral swing.

This is how he closed out his victory, on the 72nd hole. Legend.

9. It’s the last tournament (worth watching) of the calendar year, with Woods’ 18-man Hero World Challenge taking place in the Bahamas.

Six of the top 10 players in the world are in the field.

One guy just outside that cutoff: Woods, who, at No. 13, no longer needs to give himself a sponsor exemption into his own event.

This is where Woods made his long-awaited return to competition last year, and boy, a lot has changed in the past 52 weeks. With a win this week, he can rise all the way to – get this – No. 6 in the world rankings.

Of the myriad ways to determine the winner of a $9 million match, having the two stars tee off on the edge of the practice putting green should not have even been considered.

Seriously, how did they settle on that?

The yardage – 93 – was awkward, one that the players would never practice for a par 3.

Taking five minutes to cut the new hole location was a buzzkill, with the players waiting impatiently on the tee.

And it was utterly absurd to tee off from the practice putting green, especially when they had nothing more than a wedge in their hands. From that tight lie they had to catch it absolutely perfectly, otherwise it’s bladed over the green or dumped into the creek short of the green. No wonder Tiger teed up his lob wedge – more margin for error.

Look, we get it: It’s logistically more difficult (and more expensive) to light the entire 18th hole, but having the match come down to a gimmicky hole was a fitting end for a failed first attempt at golf PPV. 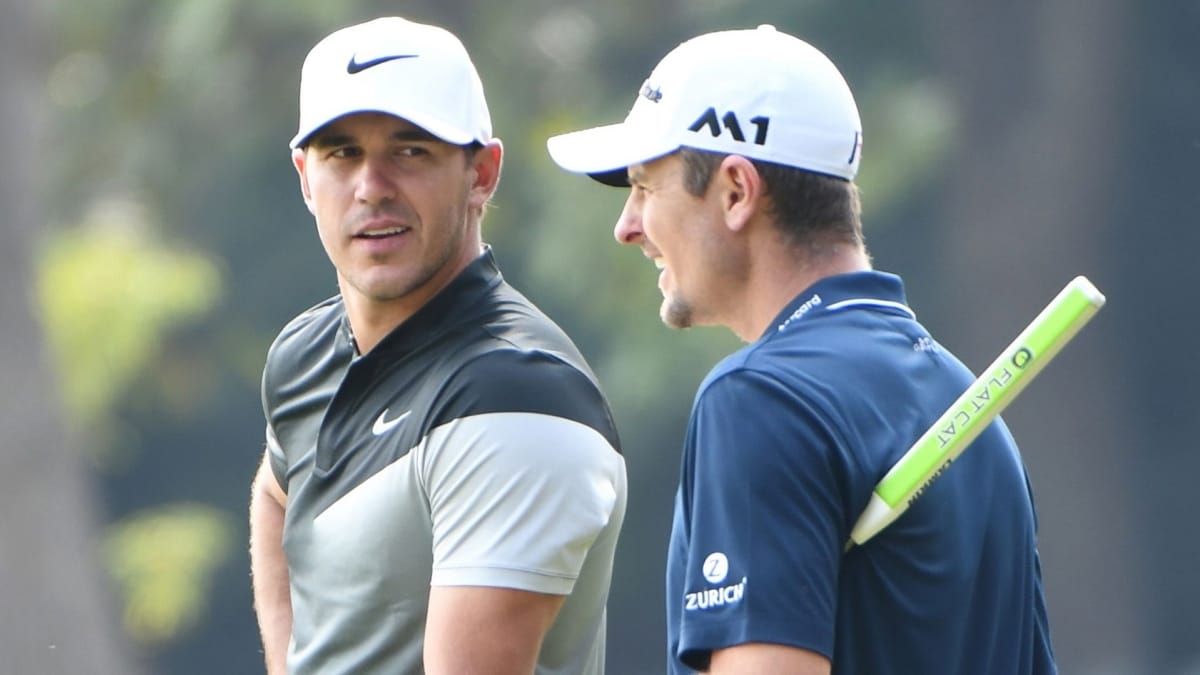 Round and Round They Go: Brooks Koepka and Justin Rose. Koepka returned to world No. 1 this week, but he’s not in the field in the Bahamas and is in danger of losing his top spot at the end of the year. Rose can return to No. 1 – and likely finish there – with a win, no worse than a four-way tie for second or solo third in the 18-man event.

Don’t See That Often: Aaron Rai. The latest European Tour winner in Hong Kong had iron headcovers – which should come with a two-shot penalty, for being uncool – and a beat-up putter cover.

Silver Anniversary: Phil. This week marks 25 consecutive years (1,305 weeks in a row) that Mickelson has been ranked inside the top 50 in the world rankings. Twenty-five years! That is crazy consistency.

Miracles Do Happen: Charles Barkley. At the post-match event at TopGolf, Sir Charles showed off his … hitch-free swing? Oh my.

Yeah, That’ll Do It …: International Presidents Cup team. The news out of Melbourne last week was not that the Internationals will try something new in 2019 in terms of roster construction or strategy. No, it’s that they’ve unveiled a new shield logo for the squad. Interesting choice, because they haven’t offered any protection against an American stampede over the years.

Is It 2019 Yet?: Sergio Garcia. After what was supposedly a lost year, Sergio looks awfully good of late, with top-10s in five consecutive European Tour events – the first time he’s done that in a decade.

Free Is For Me: Keegan Bradley. After Tommy Fleetwood decided to take some much-needed R&R and WD from the Hero, Bradley was next in line for an invite. Free world-ranking points during a working vacation? Don’t mind if I do, thanks. 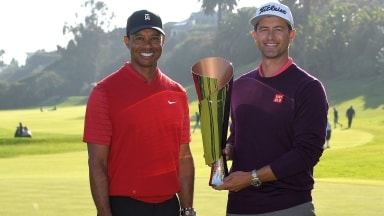 Monday Scramble: Someone finally an official winner at Riv 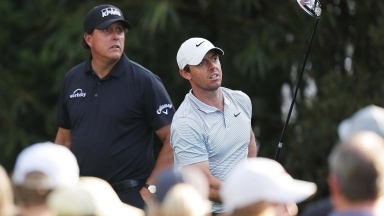 Phil Mickelson didn't get the win, but he did gain some momentum. Rory McIlroy didn't play, but he did return to world No. 1. 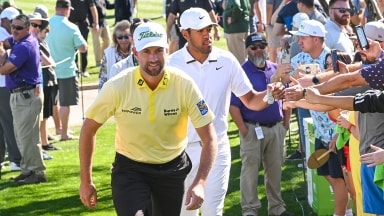