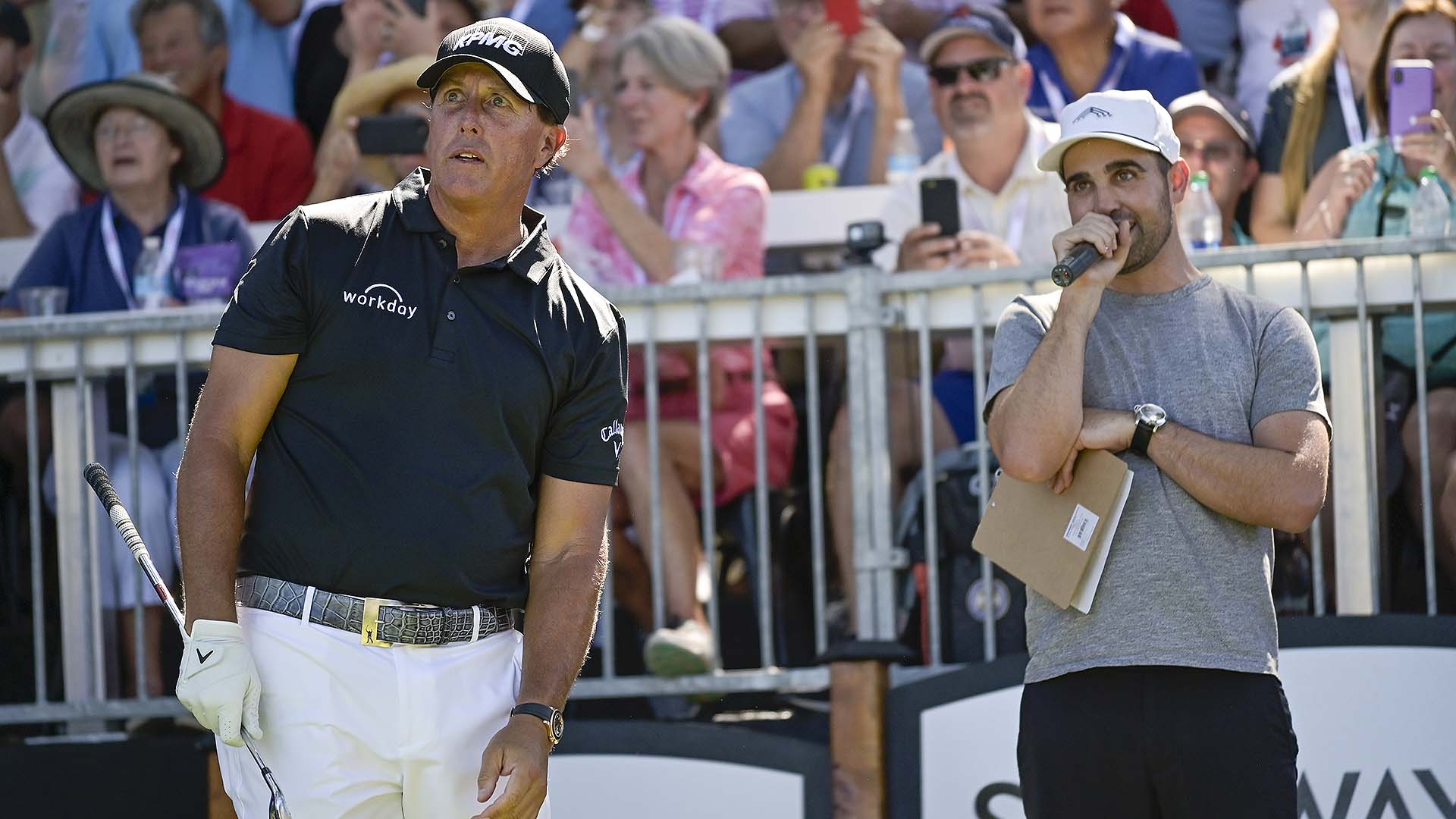 NAPA, Calif. – Gather ‘round, one and all, for the season premiere of the Phil Mickelson Experience.

Mickelson was center stage Wednesday at the Safeway Open, shaking off rust by teaming with NBA superstar Stephen Curry in the pro-am. He strode to the first tee like the mayor of Napa, shaking hands and posing for pictures and introducing himself to nearly everyone within reach.

Dressed in a black shirt and white shorts, Lefty now officially qualifies as svelte. The weight-loss program he started at The Open in July has him nearly 30 pounds trimmer, back to the top end of his weight range when he was in college at Arizona State in the early '90s. The physique overhaul has injected a youthful vibrancy, as a man who is fast approaching his 50th birthday tries everything he can to turn back the clock.

The laid-back antics continued throughout the round, with Curry and Mickelson chatting their way around the North Course. Mickelson offered advice on the greens for the two-time NBA MVP, and both made a detour on the third hole to try their hand at a long-distance champagne cork shot contest. The two even shared in Curry’s signature shimmy dance move after Mickelson rolled in a 15-foot birdie on the final hole.

There were plenty of laughs, smiles and thumbs-up for the NorCal fans who came out to witness a cross-sport intersection. It also happened put the actual golf on the back burner for the five-time major champ.

Mickelson has been something of a revelation in recent months, turning over a new leaf that few thought he had in him even after standing at the forefront of the sport for more than two decades. His Twitter account has taken social media by storm, featuring video chats with other players and advice on how to build the best calves in equal measure. It’s a light-hearted window into the dry humor and savage one-liners that have previously been reserved for Tour locker rooms. 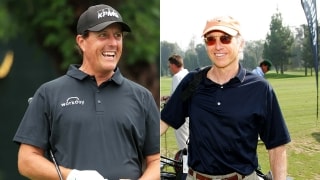 The Social: Phil trades barbs, jabs and insults with the master, Larry David

Phil Mickelson can give and take as well as anyone in the golf world. But he may have met his match with legendary comedian Larry David.

“It made me laugh because at the beginning of it, my buddies are like, ‘It’s not him.’ I’m like, ‘Trust me, it’s him.’ If you read the stuff he says back and watch everything, it’s nobody but Phil,” Justin Thomas said. “We’re living in a day and age where social media kind of takes over the world and it is bizarre, but I think he’s enjoying it a lot more than he thought he was going to. I know I am.”

The explosion of Mickelson’s off-course makeover, replete with exercise tips and candid beach snapshots, has coincided with a dramatic drop of his on-course form. A victory at the AT&T Pebble Beach in February that signaled a possible breakthrough instead led to an improbable slide, one that again left him short of the Tour Championship and featured just a single top-35 finish in 16 subsequent starts.

While the terms "Mickelson" and "consistent" have never been intertwined, this year was uncharted territory. At multiple points he spoke with candor about his active search for a spark or turnaround coming up empty.

“Probably the worst six months of my career,” Mickelson said Wednesday. “I’m determined to fix it.”

Barring a sudden turnaround, Mickelson is about to miss playing in his first U.S. team event since the 1993 Ryder Cup. His world ranking, which has dropped from 17th to 43rd since his Pebble victory, must stay inside the top 60 by next spring or Mickelson may not automatically qualify for the U.S. Open.

More so than any of his peers, Mickelson has found effective tools with which to keep Father Time at bay. But no one can hold out forever.

“I wasn’t mentally sharp or focused the last five or six months, and it led to some very poor play,” Mickelson said. “I’m taking a little bit of a different route this time. I’m not going to put as many hours in and I’m going to try to be more focused on the time I do put in and enjoy it a little more and see if I can get it turned around.”

So as the fan-friendly sideshow reached wine country with Mickelson set to begin his 29th season as a pro, it perhaps sheds light on what the next chapter might hold for the crowd favorite. Few expect him to bolt for PGA Tour Champions once he celebrates a milestone birthday in June, and it’s unlikely that he’ll parse away additional practice time for side projects like course design.

Instead Mickelson has carved out yet another niche, one where he explores the whimsical side of the game and gives fans a peek behind the curtain. It’s talk of flexing calves and dropping bombs, and it’s a medium that plays to all his greatest strengths. It’s also one that doesn’t require on-course success to resonate with those attending tournaments or following on Twitter.

With two tournament wins in the last 18 months, Mickelson isn’t turning his back on competition anytime soon. The disappointment is evident in his tone whenever he references his summer swoon, and he remains resolute in his stated plans to get the ship righted.

“It’s just frustrating when you know you can perform a certain way and you don’t,” Mickelson said. “I’ll get it figured out. I always have in the past. I’ve gone through ups and downs in the past, and I’ll figure it out. Hopefully I already have.”

But all the leg exercises and juice cleanses in the world can’t stave off inevitable decline forever. There’s still a chance that Mickelson’s game will continue to vex him into 2020 and beyond, that the drives will wobble and the putts will slide by.

But should Mickelson’s drought linger, it’s unlikely he’s going anywhere. Instead he might simply have more time to devote to becoming the Tour’s latest social media star, as one of the two most popular players of a generation has discovered a way to relate to fans and maintain popularity even in the face of over-par scores. If nothing else, it would be the latest iteration of a career that left a broken mold in its wake years ago.