The Challenged Tour: Breaking 90 - with one arm 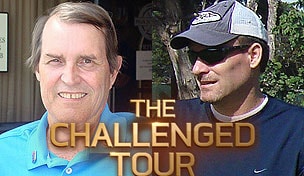 There are lots of amazing golfers on display this week at PGA National in the Honda Classic – no doubt you've heard of most of them.

There will be lots of amazing golfers on display in August at PGA National in the North American One-Armed Golfer Association Championship – odds are you haven't heard of any of them.

John Barton will get a close-up view of both groups, as head of the Honda's transportation committee and as a founding member of the NAOAGA.

I met Barton (pictured at left, above) at a recent book signing for "Broken Tees and Mended Hearts" by Judy Alvarez, a South Florida pro who works with golfers who have disabilities. Barton is one of the golfers featured in the book and, like all the others, his is an inspiring story.

Barton, 60, was an electrical contractor. On Dec. 22, 1989, he was working on a line atop a 40-foot pole when he fell into a live power line and was electrocuted.

A surge of 7,460 volts entered his body under his left arm, he told the audience at Willoughby Golf Club in Stuart, Fla. "It lit me up, set me on fire. I woke up about 4 1/2 months later in the burn unit at Jackson Memorial (Hospital) in Miami."

Barton was told he would likely never be able to speak or walk again. Neither pronouncement proved accurate, but his left arm and shoulder had to be amputated, one of 109 surgeries he would undergo after the accident.

During his rehabilitation a therapist, seeing him watching a golf tournament on TV, encouraged him to try to take up the game again.

"My left hip was totally fused, both knees were totally fused, I had very little range of motion at all," he said. "I wasn't walking – I was confined to a chair.

"I looked at that woman like she was totally crazy," thinking "Yeah, right, I'll play golf."

After getting out of the burn unit at Jackson Memorial, Barton went to stay with his sister in Georgia. He often fought depression, and another therapist told him he had to get up out of bed and do something. A neighbor had given him "an old pitching niblick," and from his wheelchair he started hitting pitch shots in his sister's backyard.

When he thought he was ready to return to the golf course, he rented a set of clubs and shot 68 for nine holes. Though he was physically exhausted, "I thought to myself, 'I can do this,' '' he said. He bought a set of golf clubs, joined a club and began playing 27 to 54 holes a day. He eventually got his scores down into the 80s, with a low round of 83. "It was my rehab," he said, "and it's brought me from the chair to walking."

Which brings us to Joe Hartley. His low round was an 84, but that was when he had both arms. Hartley, 44, lost the left one as a result of a Scud missile attack in Saudi Arabia while serving with the Army during Operation Desert Storm. He also suffered damage to his right arm and hand, and is unable to pronate or supinate his wrist or forearm or fully extend his elbow. That didn't stop him from playing golf again, however.

Hartley, a resident of Monterey, Calif., came to our attention at Golf Channel when he sent a video of himself to SwingFix and asked for advice to help him break 90. He has come tantalizingly close, with a best round of 91, but typically shoots in the mid to high 90s.

Like Barton, Hartley (pictured at right, above) began in golf by hitting wedge shots in a large yard, battled depression after the loss of his limb and taught himself to hit drives well over 200 yards and break 100 while playing one-handed.

Hartley sounds like so many other golfers when he talks about the game's attraction:

"It's a sport that you can be having just a terrible day, and the last shot of the day, you hit it just perfect, and it'll make you want to come back."

Barton's advice to Hartley? "You have to find your own swing, then become consistent with it."

Good advice for any golfer.