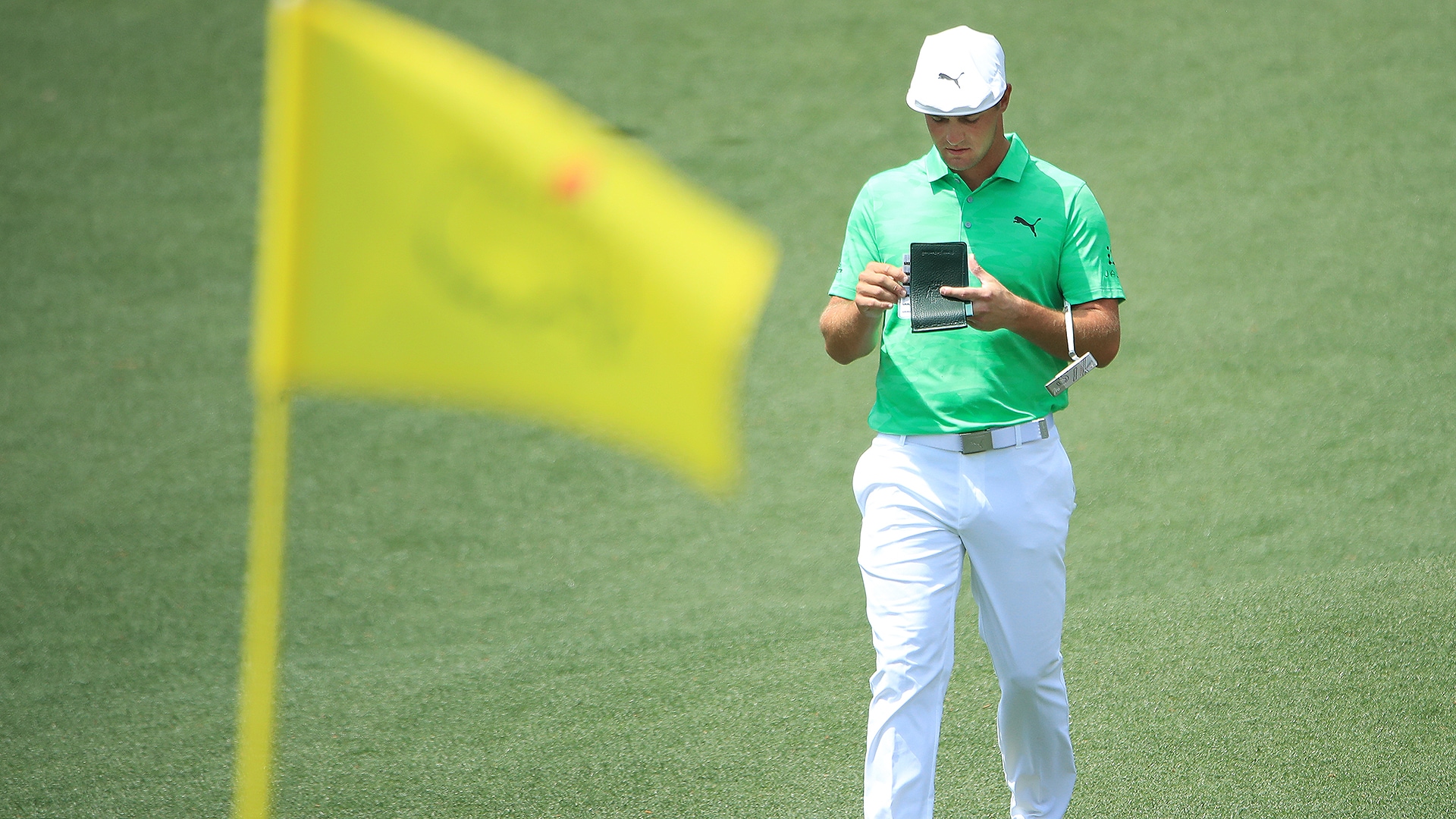 Bryson DeChambeau’s U.S. Open victory was less than an hour old, his celebratory glass of chocolate milk still cold, when he was asked about game-planning for the Masters.

“Length is going to be a big advantage there,” he said. “I know that for a fact.”

So he got straight to work – with the trophy in tow, DeChambeau flew to Denver on Monday to meet with fitness coach Greg Roskopf and begin outlining the next phase of his evolution.

Less than a year after transforming his body to add more than 40 pounds of muscle and gain 20-plus yards of distance, DeChambeau was the only player under par at mighty Winged Foot and won by six shots for his first major title. But as always with DeChambeau, it’s about what’s next – more strength, more length, more speed. Asked late Sunday how he’ll prep for Augusta National, he said he’ll begin testing a new 48-inch driver, the maximum length allowed under the Rules of Golf. He already has the highest apex height (140 feet) and longest carry distance (314.1 yards) on Tour, but if his driver is dialed in properly, that’ll bring him even closer to the holy grail, which to him is a ball speed consistently in the 200-mph range. 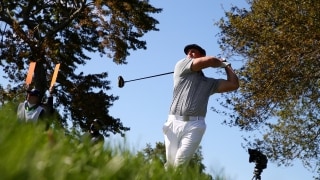 After winning the U.S. Open, Bryson DeChambeau turned his sights to the Masters and more work with a 48-inch driver shaft.

The Masters is now seven weeks away, and it’s fun to think about the possibilities for how DeChambeau might attack Augusta National, assuming typical weather and agronomic conditions for mid-November. When he arrived there in April 2019, he was a different player: Smaller, certainly, with only above-average power (301.7-yard average, ranking 39th on Tour) and a work-in-progress putting stroke. That week he shared the first-round lead with 66 but didn’t break 70 the last three rounds, tumbling into a tie for 29th. Since then, after two-a-day workouts and marathon range sessions and untold calorie consumption, he has turned himself into the Tour leader in driving distance (322.1) while also becoming a top-10 putter. That’s a winning combination.

With the help of a PGA Tour winner who has a handful of Masters appearances, here’s a look at how big, bad Bryson might go about taking on Augusta National, hole by hole, shot by shot. One thing is clear: Armed with his new weapons, DeChambeau will have to re-learn how to play there.

Pro’s take: “He should be able to carry the right fairway bunker depending on weather. With trees down both sides, I can see him bleeding a fade into position. The front of the green is open, so it’s easy to run the ball up, but it’s difficult to keep it on the green.”

Pro’s take: “Full Kraken. Aim at the left edge of the right bunker and let it eat. He’s gonna wail on that thing. And when he does, he’s going to have anywhere from 6- to 8-iron in. He also has all that room through the fairway, toward the third hole. If the flag is way over on the left, he can hit it dead straight over the bunker, maybe with a tailing draw, and give himself a phenomenal angle.”

Pro’s take: “The more I think about it, it’s full send every day, no matter the flag position. It’s still easier to control a pitch shot from short of the green than a 115-yard wedge to that little finger. But that’s something he’ll figure out week-of.”

Pro’s take: “He’s hitting 4- or 5-iron when guys are coming in there with 5-woods. His speed with his long irons is like my driver ball speed. It’s a joke.”

Pro’s take: “Depending on the wind and conditions, he should be able to take on those bunkers, but it’ll be a tough carry, even for Bryson. I’m not going to rule it out, but it’s going to be one of his tougher tasks. Even if he puts one out there 325, he’s going to leave himself a short iron in. Huge advantage.”

Pro’s take: “Full send. Tee it high, aim down the left center, and I think he’s going to absolutely throttle it. The farther you are down there, the flatter it is. When I played, you’d start it at the left trees and bleed it, or you’d draw it and try to kill it into the hill. He can take all of that out of play. The biggest thing for him is the trees; he didn’t have to worry about that at Winged Foot. Pine straw and having trees to contend with, that’s way more difficult than 4-inch rough.”

Pro’s take: “If the wind is into and off the left, it’s a tough carry, but depending on the conditions he should sail it over the bunkers. Off the upslope he’ll hit into that green with a long iron or hybrid. You rarely see that.”

Pro’s take: “I think he’ll take it down the left-center of the fairway and hit a high bomb, almost flying it to the bottom. Which is just stupid. He likes to shape it that way, right to left, so just hit a normal one. The more left you go, the worse the angle is. A little right, the whole green opens up. He’ll have a flip wedge in there, 125 yards or less, and then it’s all about controlling the spin.”

Pro’s take: “My guess is he goes with 3-wood off the tee here. The thinking being that if he overcooks it with the driver it’s big trouble, and if he pushes one, he’s so far deep in there it’ll make Bubba Watson’s shot [in the 2012 playoff] look simple. That bunker at the bottom of the hill wasn’t even a consideration for me unless I had to punch out. I didn’t even chart it on the yardage book. I’m guessing he will.”

Pro’s take: “I don’t think he can go over the trees down the right side. Now, he can get it down there to where he leaves himself a nice opening, but he’s gotta be careful of the overdraw. That’s a hole you’d like to send it, but with his normal shot shape you’ve got to be careful. I could see a power bleeder. At most he’ll still only have an 8-iron in probably.”

Pro’s take: “Like anyone, you’ve got to get the distance control right. He hits it so high, and any kind of wind blowing, 10 to 15 mph, and I could see him dumping it in the bunker or launching it over the green at least one or two days.”

Pro’s take: “He can tee it so high, and he hits so far up on the ball, that I think he takes driver over the corner and is hitting 9-iron or wedge in there. If Bubba can do it [with only a sand wedge left for his second shot in 2014], Bryson can do it. He could also go right for safety, if he wants to take the creek out of play. Split the turn point on the right-hand side and blow it through there, closer to 14. But you’ve got to be careful or you’ll be punching out from the trees and working hard for a 4.”

Pro’s take: “Don’t think it’s a full send here. That hole is a soft, sweeping dogleg-left and the fairway cants pretty good from left to right. The left trees are no good. The right trees are a problem. I can see him going more positional with the 3-wood. I don’t think he needs driver.”

Pro’s take: “I’ve never seen anyone put it in there, but the pine trees on the left are squarely in play. This is another one where if you get into the trees, you have to be an artist. You’re taking chances if you put it in the trees on 13 and 15, because if you decide to play hero and go for it, that’s when you bring the water into play. If he squeezes it down the alley, he has a short iron in.”

Pro’s take: “Anything from an 8-iron to a wedge, depending on conditions.”

Pro’s take: “Wail on it. This is one of the rare holes where even if you hit it in the trees, you can run it up either onto the green or leave yourself a relatively simple pitch shot. There aren’t a lot of those at Augusta.”

Pro’s take: “Hammer it over the bunkers and leave yourself 130 yards into that green up the hill. And if that’s the case, if he only has a gap wedge or sand wedge, it doesn’t matter where the flag is because he’d be able to stop it.”

“I think he’s going to be very tactical and well-thought-out, obviously, on where he can attack. It’s not going to be like Winged Foot. He can’t just get up on every tee and swing as hard as he can. He’s going to have to hit some 3-woods, some fades.”

IS HE THE MASTERS FAVORITE?

“He’s top 2 or 3, but I don’t think he’s my favorite. It’s not the tee game; it’s about the nuance on and around the greens, and how absolutely deft you have to be with your wedges from 125 yards and in. He’s going to have to work his butt off to eliminate any potential issue there, and he probably will. But it’s not going to be one- or two-dimensional like Winged Foot.” 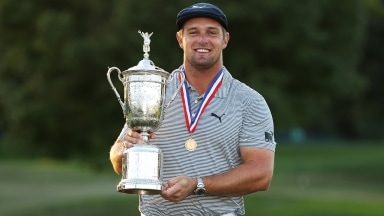 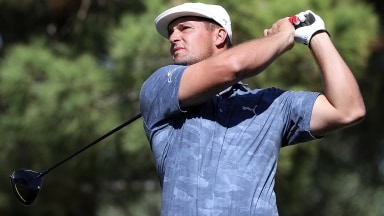