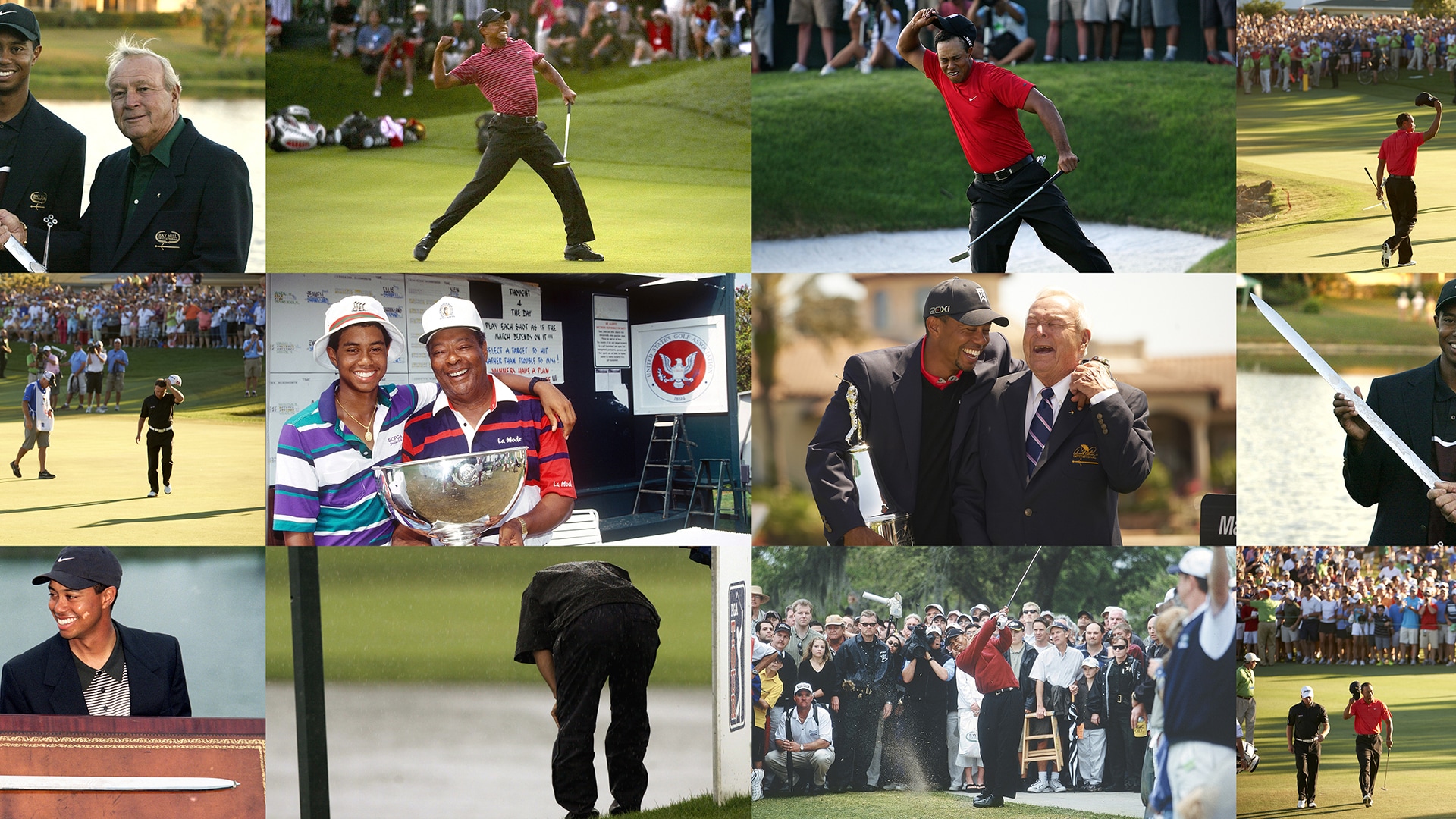 Tiger Woods will miss his seventh Arnold Palmer Invitational in the past eight years this week as the 45-year-old continues to recover from a serious car accident last Tuesday in Los Angeles.

Woods suffered comminuted open fractures to the upper and lower sections of his right leg, as well as significant trauma to his right ankle. Doctors at Harbor-UCLA Medical Center needed to insert a rod, screws and pins to stabilize Woods’ leg. The most recent update from Woods' team came Friday night and said that the 15-time major winner had successful follow-up procedures at Cedars-Sinai Medical Center, where he was transferred to on Thursday, and was "in good spirits."

While Woods' peers on the PGA Tour showed their support by wearing red and black Sunday at the WGC-Workday Championship, Woods' absence will likely still be significantly felt at Bay Hill Club and Lodge, a place where Woods has won nine times, eight of those victories coming as a professional.

Woods was asked in 2018, the last time he teed it up in the API and less than two years after Palmer's death, what he considered some of his fondest memories at Arnie's Place.

"To be able to win this tournament and to have Arnold there and to shake his hand and for him to give me a big hug and a couple times he says, 'I called it, I knew you were going to make that putt,' and it was little things like that, the last sharing jokes with him out there on the green, and he and I laughing," Woods recalled, "those are moment that is unfortunately that I'll never have, but I have those memories."

And so do we, as we attempt to rank Woods' nine winning moments at Bay Hill: 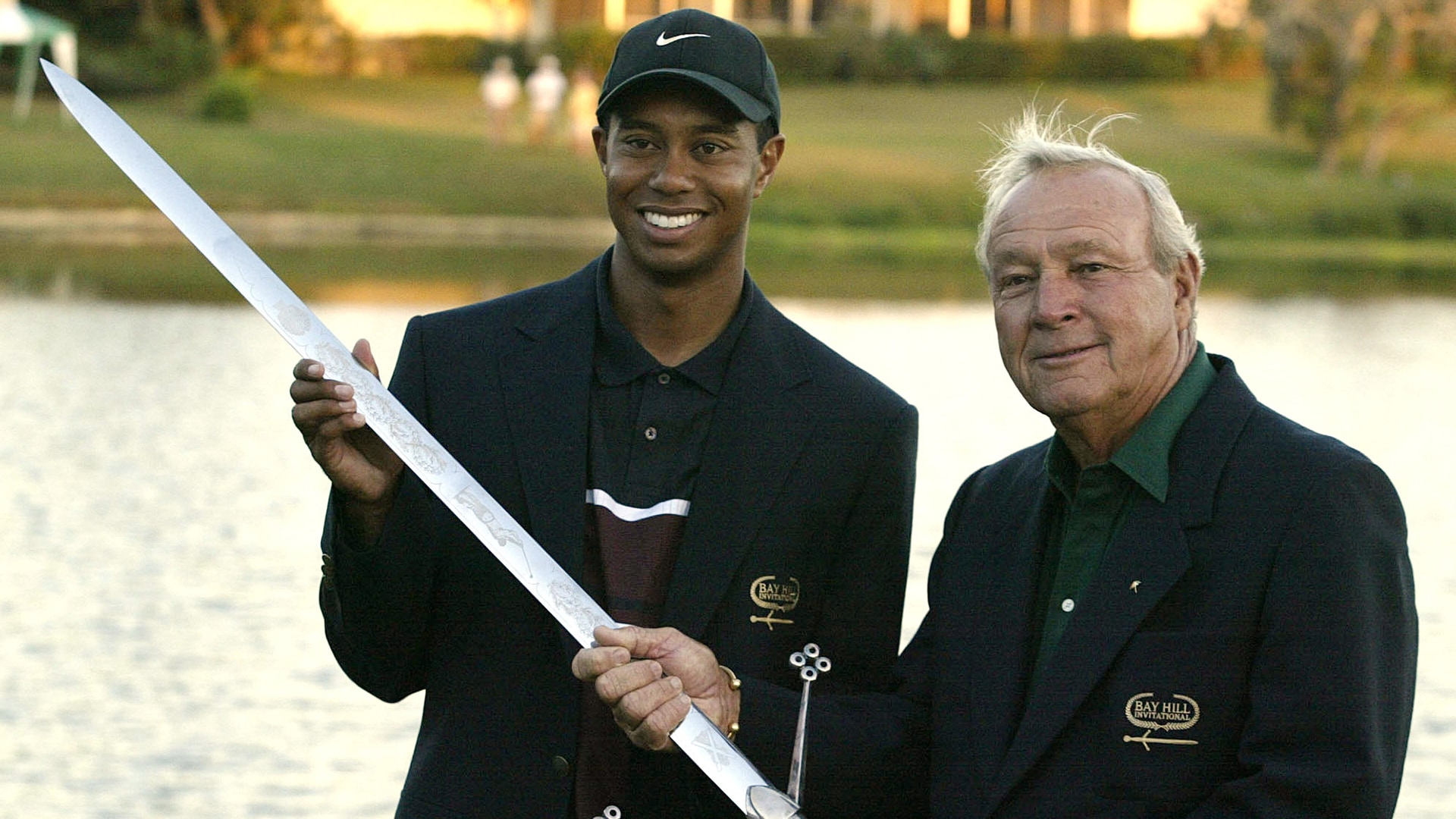 Despite a third-round 74, Woods managed to shoot 13 under for the week and beat Michael Campbell by four shots. Phil Mickelson, Sergio Garcia, Vijay Singh and Ernie Els were among those who began Sunday within three shots of the lead, and Mickelson, who had nearly beaten Woods a year earlier at Arnie's Place, even led for a brief moment after a birdie at No. 10. But Woods birdied Nos. 9, 10, 12 and 16 to pull away down the stretch while Mickelson bogeyed each of his final three holes. “It was quite a fight out there,” Woods said. “I tried to hang in there and give myself a lot of looks at birdie and not make any bogeys. You need to play smart, and I was able to do that.” Woods’ win was his first of 2002, and he’d go on to win the Masters and U.S. Open that year. 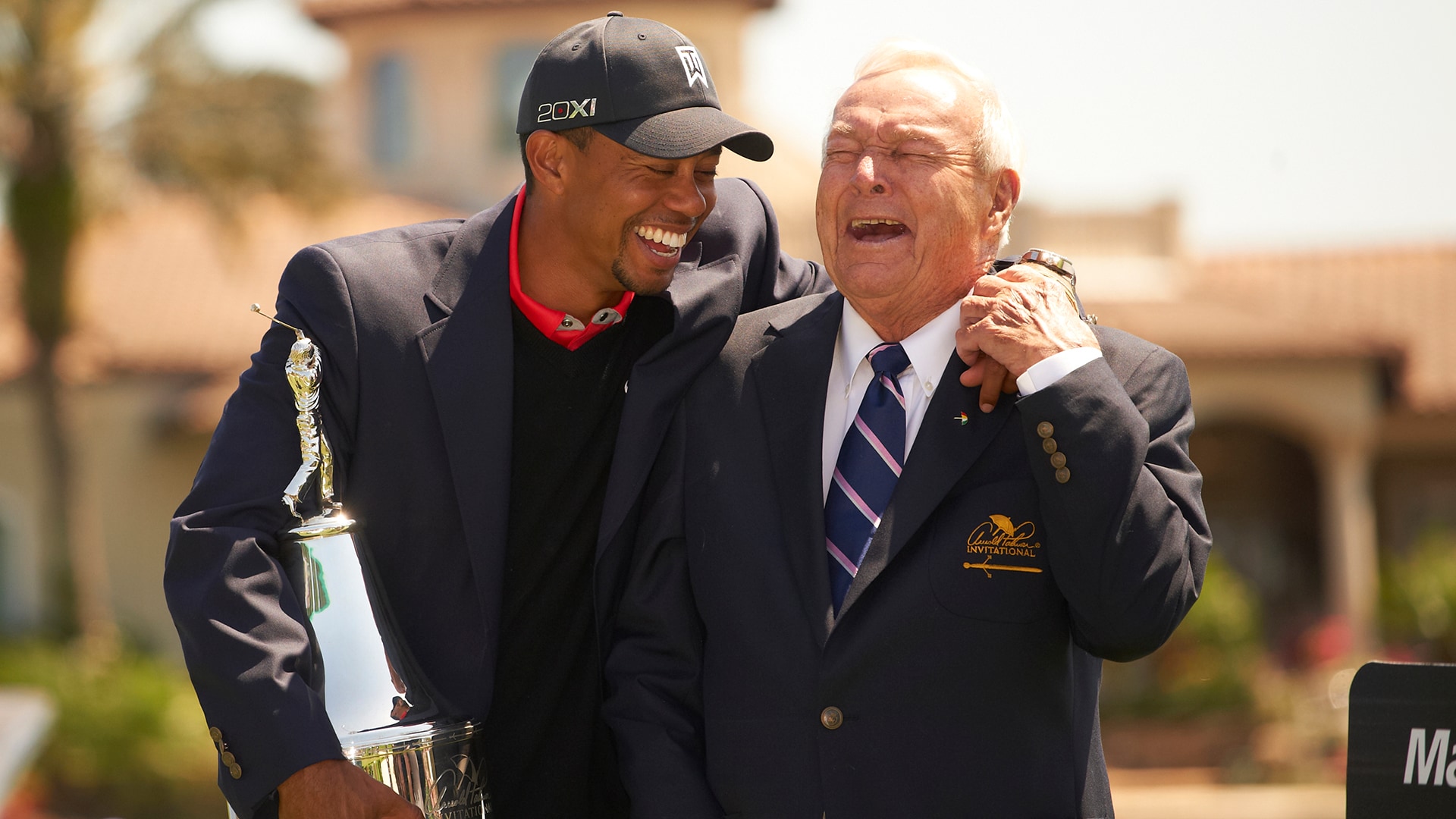 Woods’ eighth and most recent Bay Hill victory came by two shots over Justin Rose in what was a Monday finish after severe weather forced the suspension of play with Woods through two holes on Sunday. Scoreboards were toppled over by tornado-like winds, which also downed trees and took out traffic lights in the area. When it was all said and done, though, Woods had reclaimed No. 1 in the Official World Golf Ranking for the first time since 2010. “If I get healthy, I know I can play this game at a high level,” Woods said. “I know I can be where I'm contending in every event, contending in major championships and being consistent day in and day out – if I got healthy. That was the first step in the process. Once I got there, then my game turned.” Woods won five times that season – the API was the third during that run – but he strained his left elbow that June, and the following year, of course, started his battles with serious back injuries. One more thing from this win: the memorable photo of Woods and Palmer laughing. When asked what he told Palmer, Woods wouldn’t disclose details: “I can't say it here, but it was funny, really funny, actually. … Really funny.” 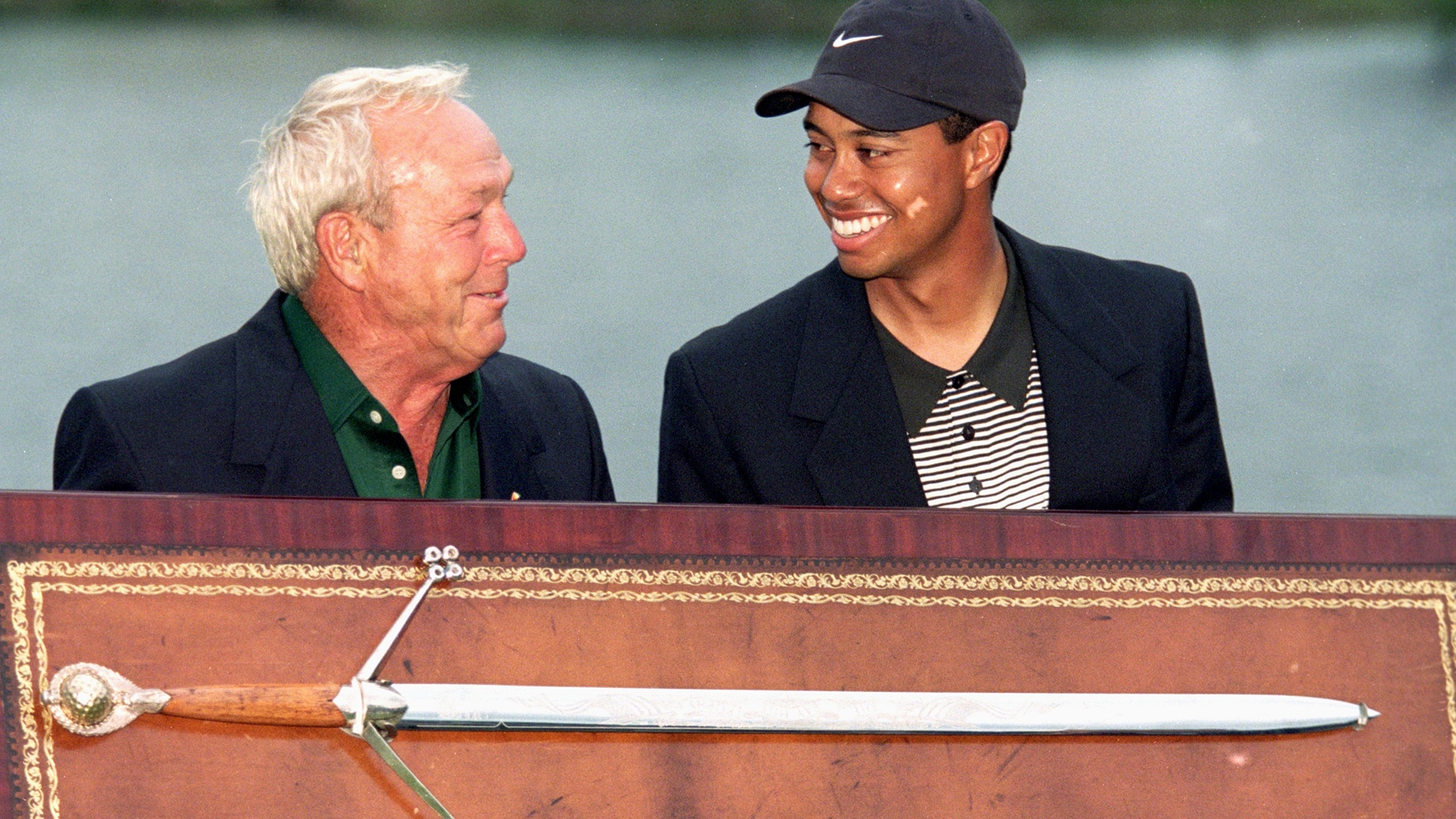 Woods had cracked the top 10 just once in his first three professional starts at the API, but he arrived at Bay Hill already with two wins and two seconds on the year. After shooting 64 in the second round and withstanding a tournament-record 63 from Davis Love III on Saturday, Woods led Love by two shots entering the final day. “I've always been a big believer in the fact that they have got to come get me; and if I go out there and make 18 consecutive pars, then they are going to have to shoot under par to beat me,” Woods said after 54 holes. “And that's the philosophy I've always had. The more difficult the golf course, the better that philosophy works.” Four holes into Sunday’s round, Woods was five ahead as Love bogeyed two of his first three holes. Woods went on to shoot 70 and win by four. On the year, Woods won 10 times, including three majors. 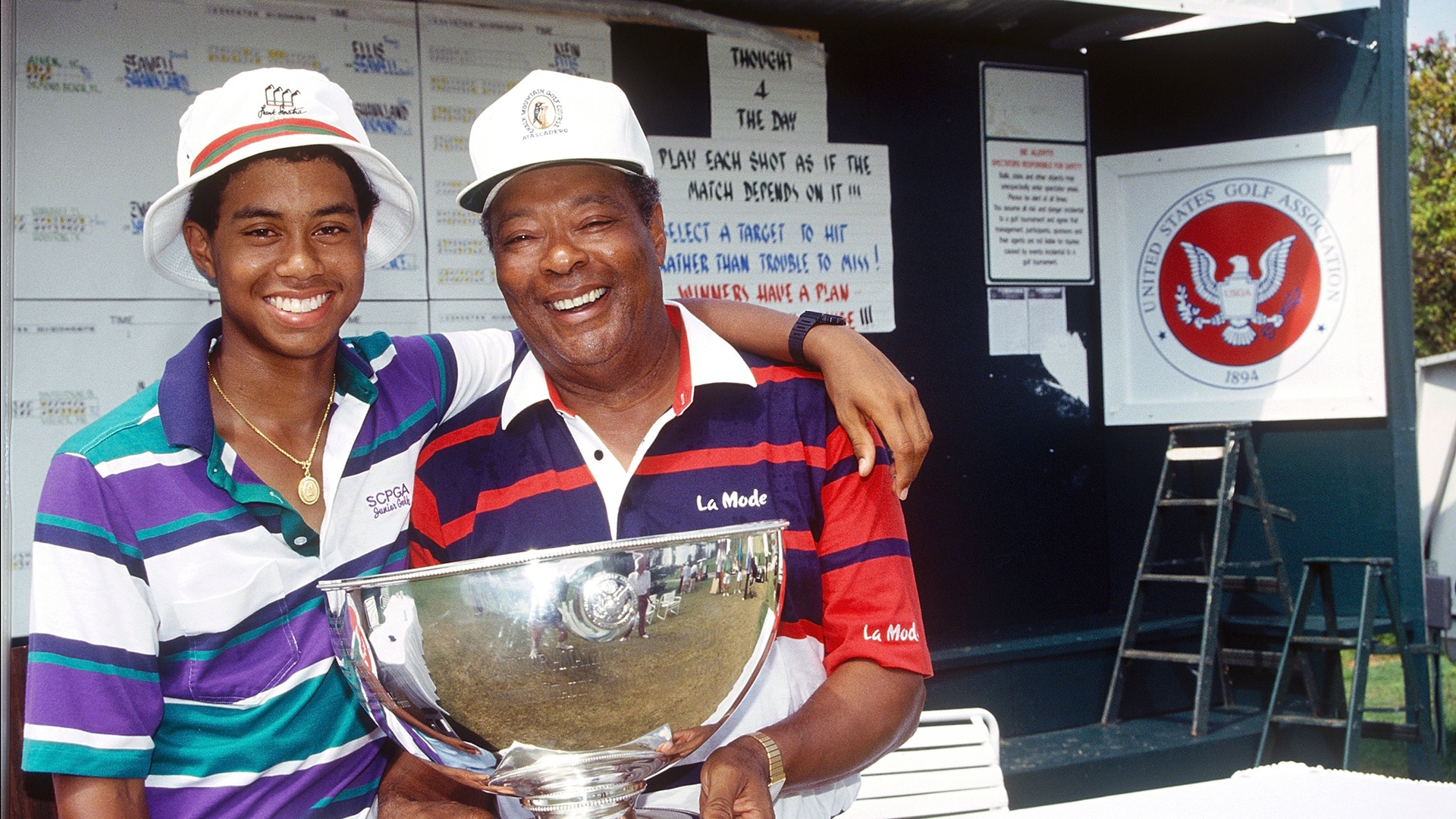 It was this year at Bay Hill that Woods not only won his first U.S. Junior Amateur title – and first ever tournament at Arnie’s Place – but also met Palmer for the first time. According to PGATour.com’s Jim McCabe, Woods’ first memory of Palmer came earlier that week: “He was handing out some medals to guys that have played in three Juniors and there are only a handful of guys that had done that,” Woods recalled. “He was giving those guys medals and I said, ‘I’d like to one day play in as many Juniors as that.’” Woods, of course, won that many. The week of his first, he was co-medalist and then won three of his first five matches before the 16th hole before taking down Brad Zwetschke on the first extra hole of the championship match. "So nerve-wracking," Woods said many years later. It was the first of three straight U.S. Junior wins by Woods. 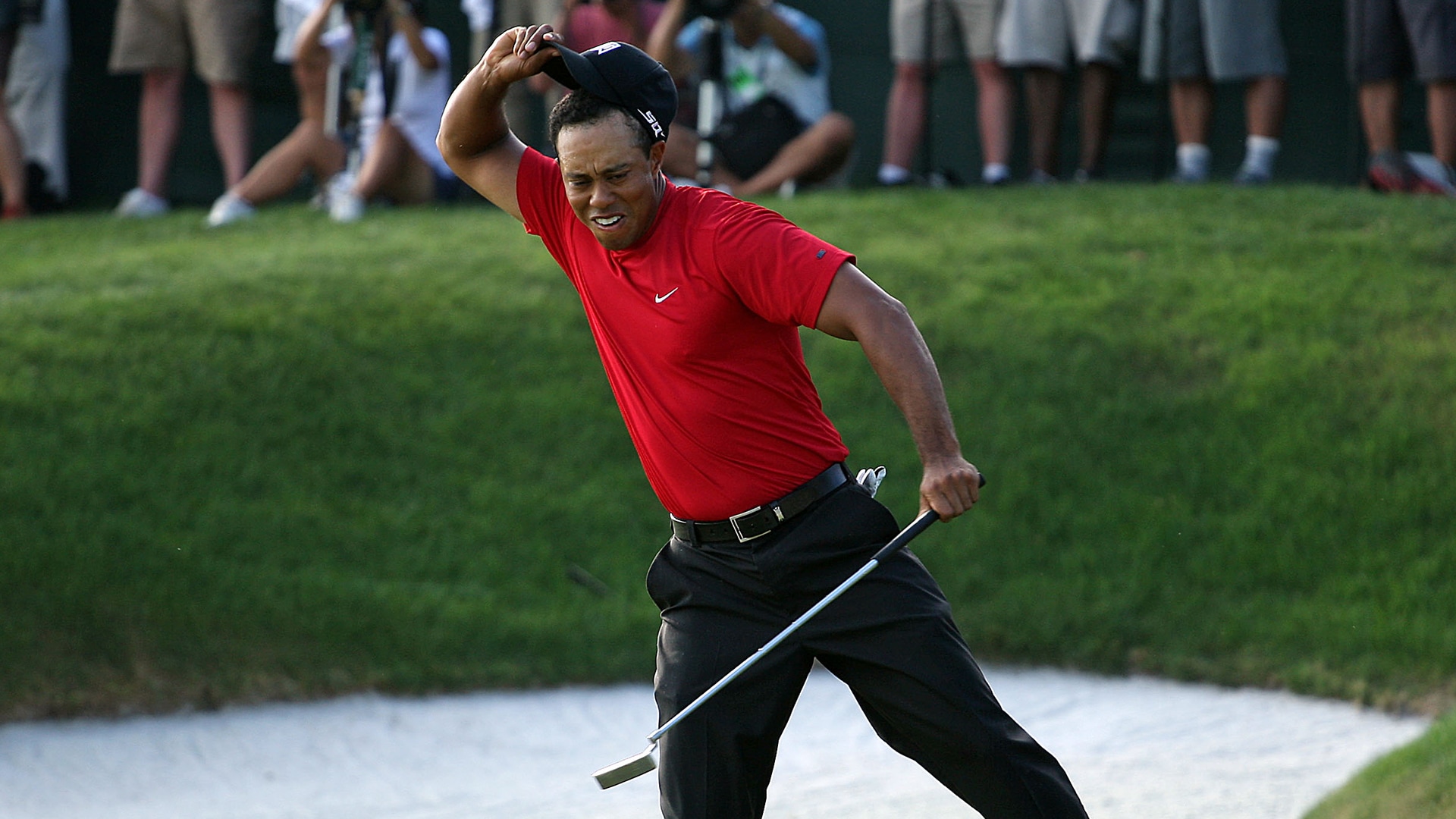 “Hello, Ben Hogan!” That was the famous call from the tower after Woods sank a 24-footer for birdie on the 72nd hole – and then threw his hat into the ground – to beat Bart Bryant by a shot and tie Hogan for third on the PGA Tour’s all-time wins list. Woods’ 64th career Tour win was his fourth straight worldwide victory to begin 2008. “It feels good, it really does,” Woods said. “It's why you work all those tireless hours. It's why you get up at 0-dark-30 and log your miles, bust your tail in the gym … to be in that position time and time again. Trust me, that's the rush, to be in that position.” Woods finished fifth the following week at Doral, runner-up three weeks after that at Augusta National and only played once more the rest of the year, winning the U.S. Open at Torrey, before shutting it down because of a left-knee surgery. 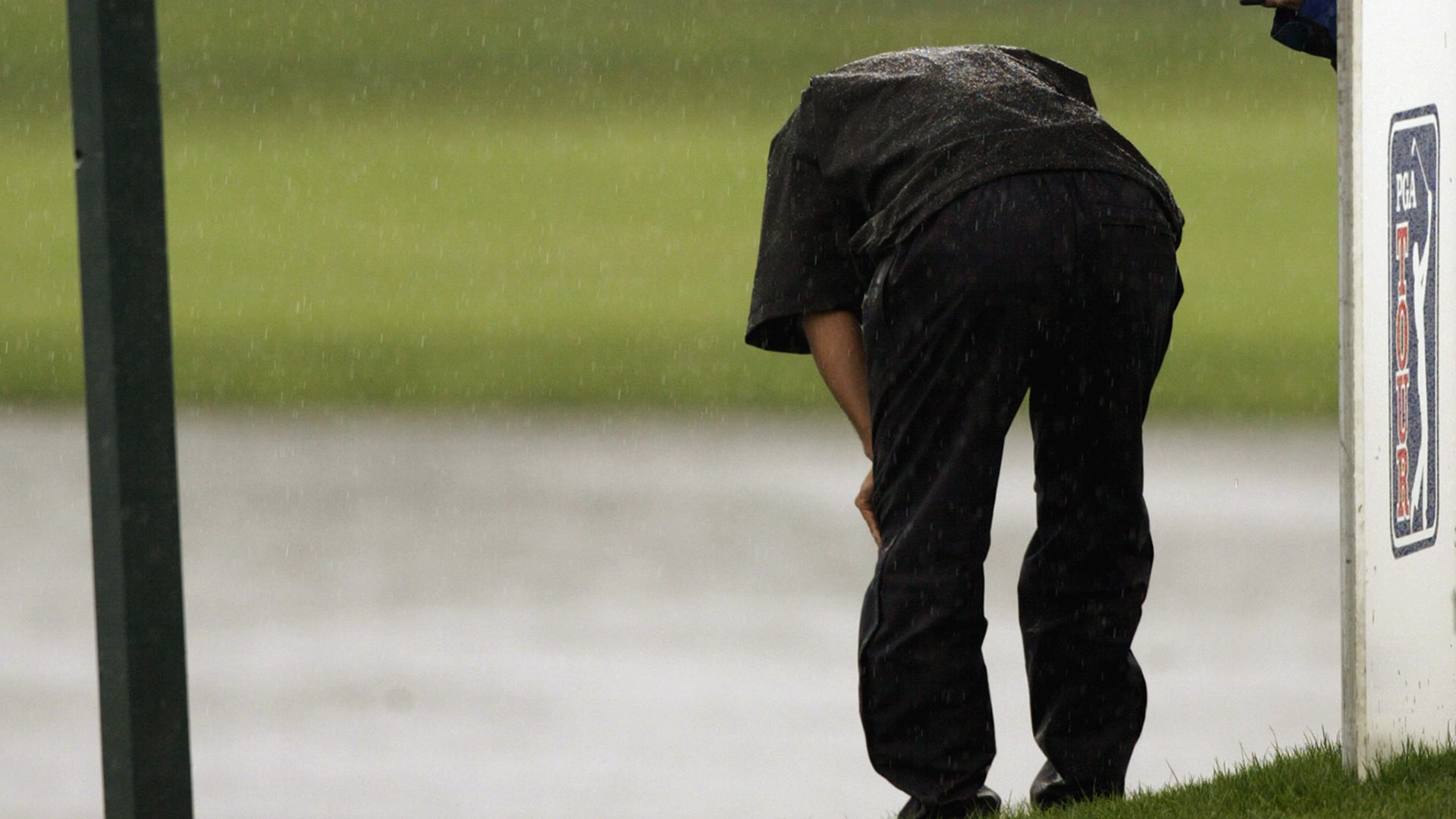 Woods won his fourth straight title at Bay Hill by 11 shots over Kenny Perry, Stewart Cink, Brad Faxon and Kirk Triplett, to set a new record winning margin at Arnie’s Place. Woods went the final 44 holes without making a bogey, which was even more impressive considering the circumstances. Not only was Bay Hill beyond soaked by heavy rains on Sunday, but Woods also battled the ill effects of food poisoning, which he believed he contracted after eating some pasta made by then-girlfriend Elin Nordegren. During his final-round 68, Woods had to frequently duck outside the ropes and a few times dropped to his knees from his sickness. “If I wasn't in contention, I wouldn't have gone. There's no way,” Woods said. “It was a joke. Every single tee shot hurt because my abs were obviously sore from last night, and I continued on while I was playing. The night was long, and the day was probably even longer.” Added Faxon: “As sick as he felt, I don't think if he felt great he would have played much better than that.” 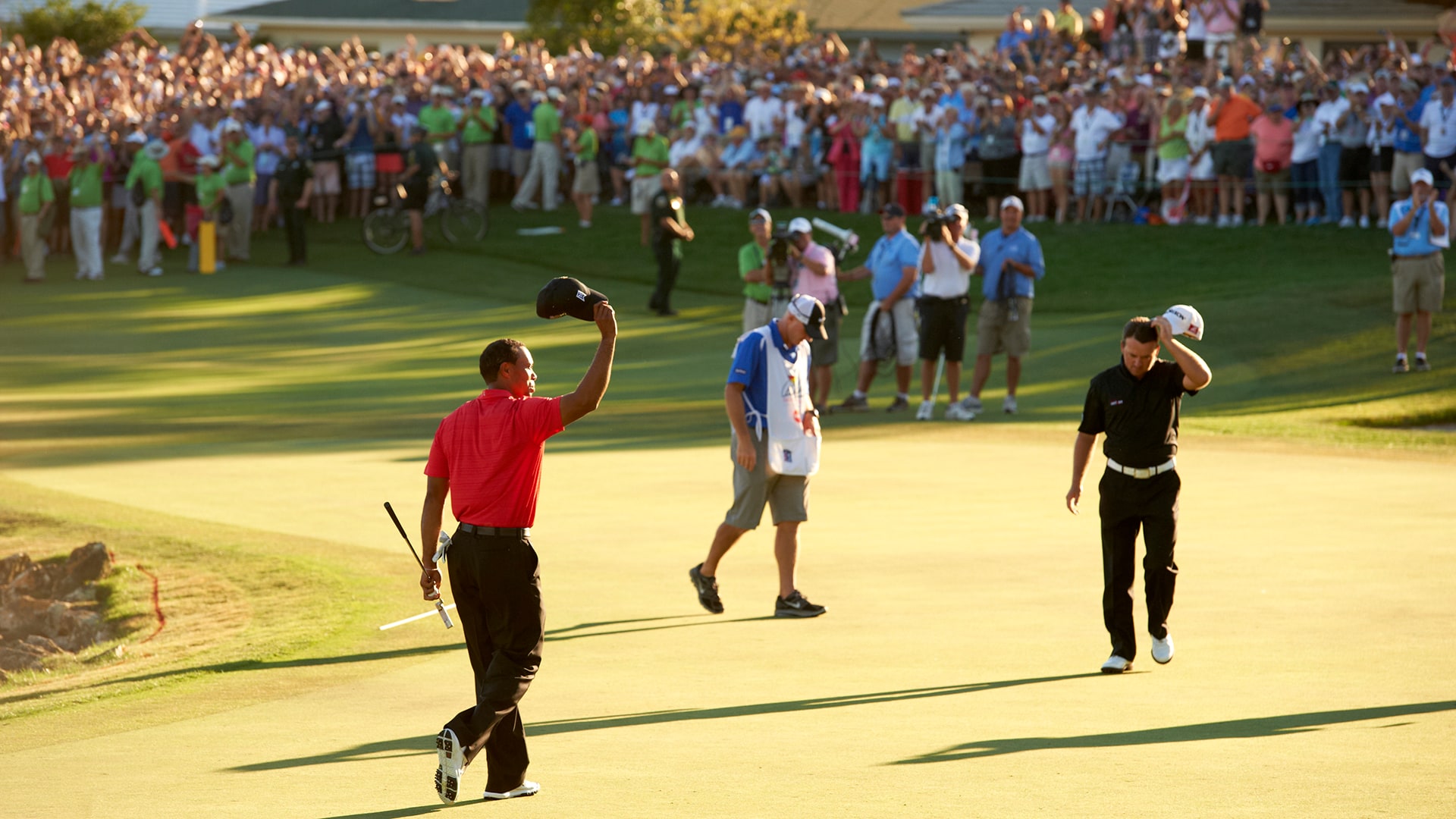 Woods ended a nearly three-year-long win drought – one that spanned 923 days and 27 tournaments – with his five-shot victory over Graeme McDowell. Woods was just a shot clear of the Northern Irishman entering Sunday before shooting 33 on the front nine and pulling away from the pack. “It’s been a long time,” Woods’ caddie Joe LaCava said. “He was a man on a mission. Let’s be honest, you saw the ballstriking. He was pretty jacked up … He probably wishes the Masters was tomorrow.” (Woods finished a disappointing T-40 at Augusta National the following month.) Woods’ seventh career API win came just two weeks after he was forced to withdraw during the final round at Doral with a left Achilles injury, but the biggest health concern this particular week didn’t involve Woods but rather Palmer, who went to the hospital with high blood pressure less than a half hour before the trophy presentation. “It really puts a damper on the situation because he is what’s so special about this tournament,” McDowell said. 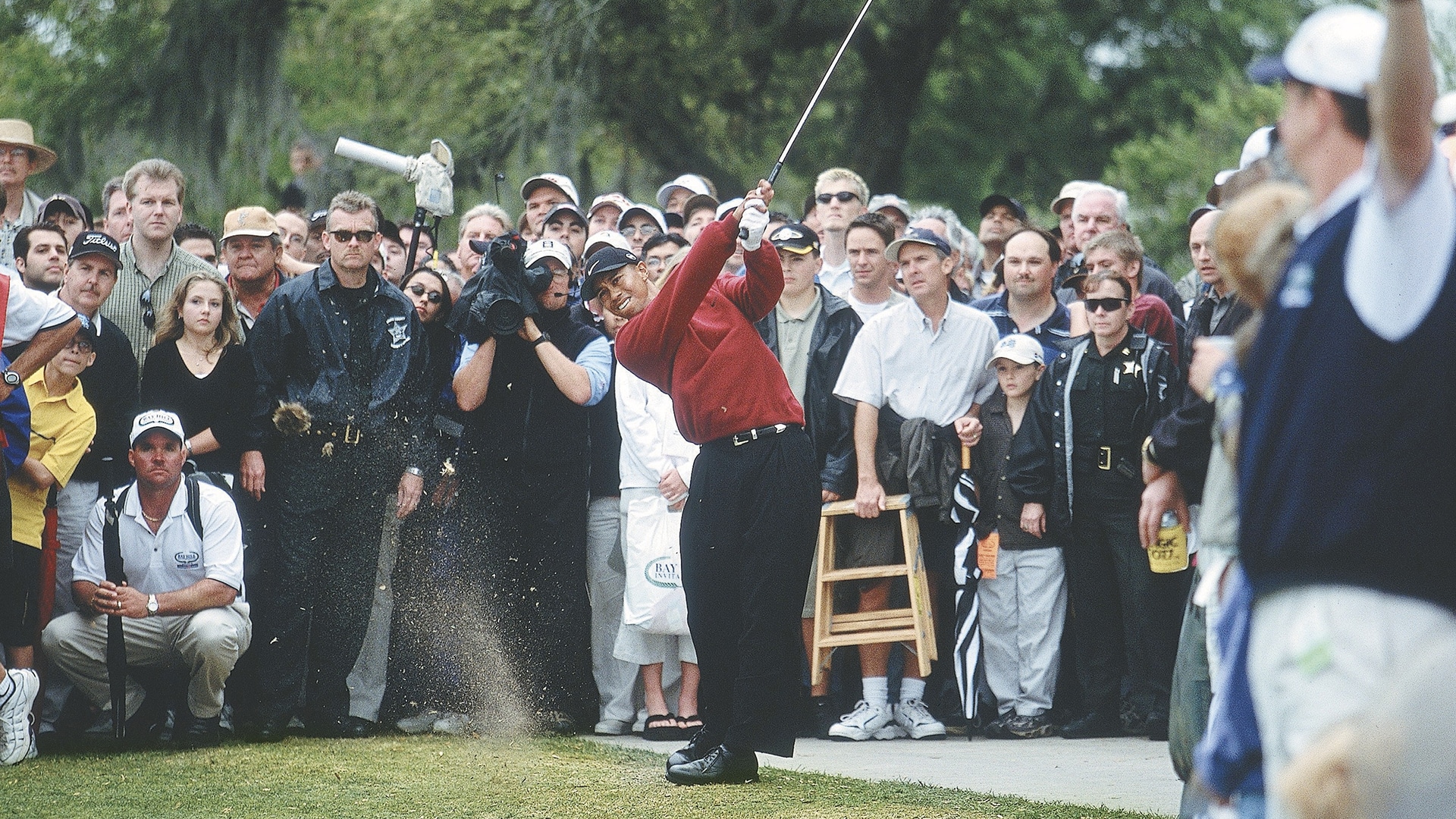 When Woods arrived at Bay Hill, the media was already rumbling about a slump. In his pre-tournament presser, Woods was clearly agitated – and rightfully so; he had gone just six events without a win and hadn’t finished worse than 13th during that stretch. “Six tournaments isn't that many tournaments,” Woods said, later adding, “Well, it's annoying because of the fact that if you think that way [that I’m slumping], then you really don't understand the game of golf.” Woods responded by taking a one-shot lead over Sergio Garcia into Sunday, and he held that advantage until Woods bogeyed the 11th to hand the lead to Phil Mickelson. Woods almost shot himself out of the tournament twice in the final three holes, his drive coming 2 feet from going out of bounds at the par-5 16th and hitting a spectator to avoid an OB tee ball at the par-4 18th. Woods birdied both holes, including the last by hitting 5-iron from near the cart path on an aggressive line over water to 15 feet, to clip Mickelson by a shot. "I got an 'Arnold Palmer' break,” Woods said. “I was able to get some wonderful breaks down the stretch. It was not a pretty round of golf, but I got the ball in the hole.” 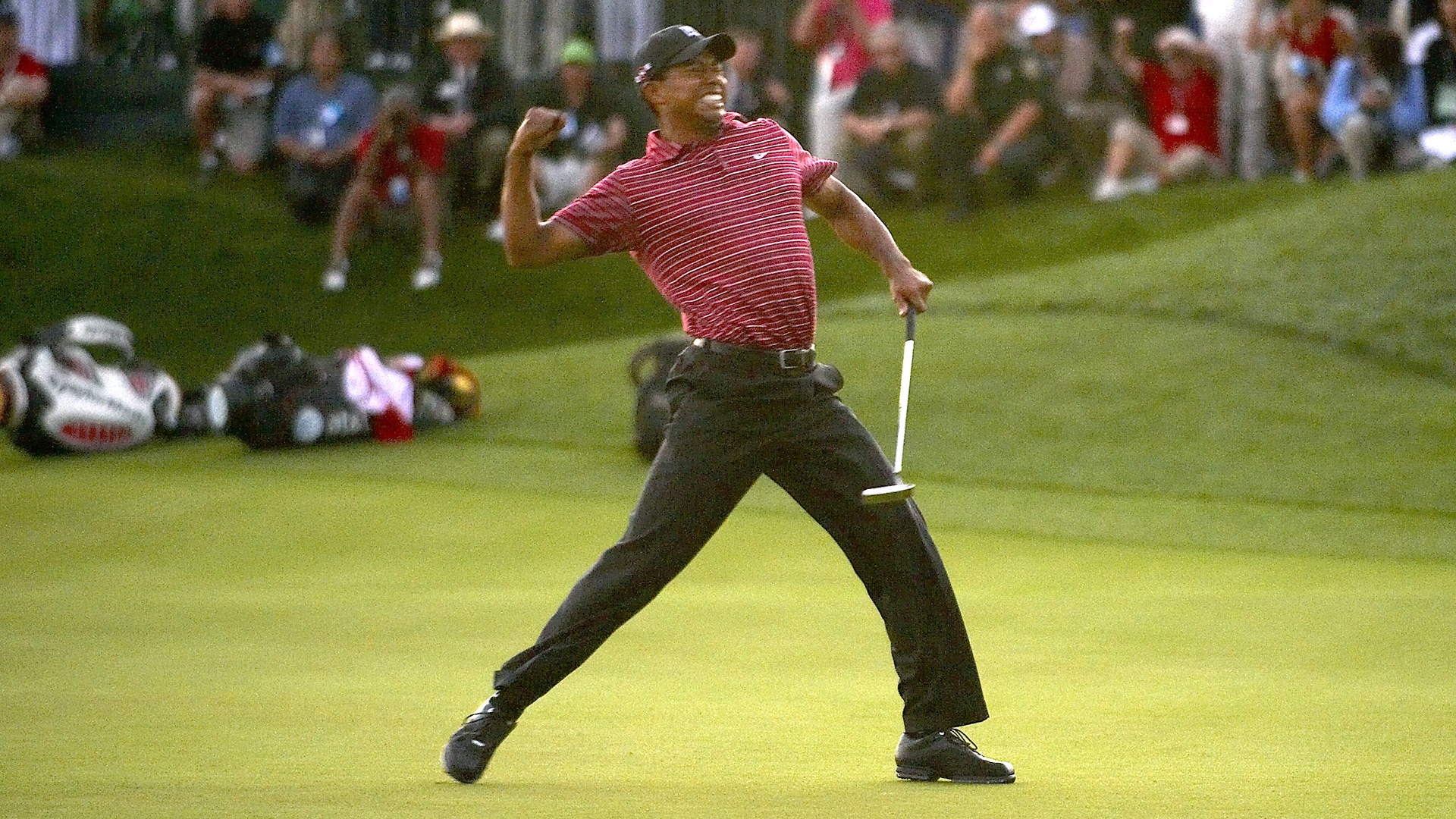 For the first time since beating Rocco Mediate in the 2008 U.S. Open and then having reconstructive surgery on his left knee, Woods found the winner’s circle. His victory was No. 66 of his Tour career and No. 6 at Bay Hill. It also was arguably his most thrilling at Arnie’s Place, as Woods came from five shots back entering the final round to beat Sean O’Hair by a shot. O’Hair made just one birdie in a final-round 73, his most crucial mistake coming at the par-4 16th hole (it was not  a par 5 that year), where he came up short and wet with his second shot. Woods made par after side-spinning a wedge close for his third shot and took his first lead. He gave it back a hole later after plugging his tee ball in the sand and making bogey, but a 15-foot birdie make on the final green proved the difference in a one-shot triumph over O’Hair. As Woods’ final putt rolled toward the hole, Woods started backpedaling. When it dropped, he unleashed one of his more memorable fist pumps. “It feels good to be back in contention, to feel the rush,” Woods said. “It's been awhile, but God, it felt good. … It's like Stevie [Williams] was saying out there: This feels like we hadn't left. You just remember how to do it. It hasn't been that long for me, but you just have that feel of what to do. And it's a matter of getting it done.” 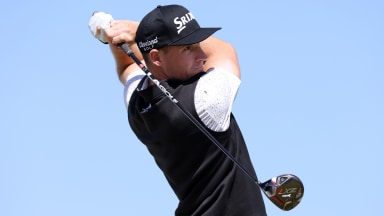 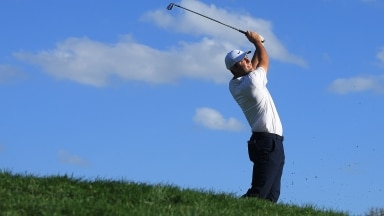 Here's a look inside the bag of Arnold Palmer Invitational champion Scottie Scheffler. 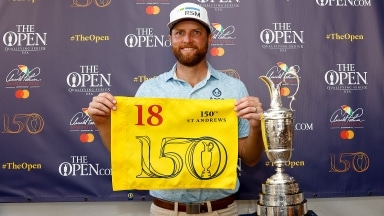