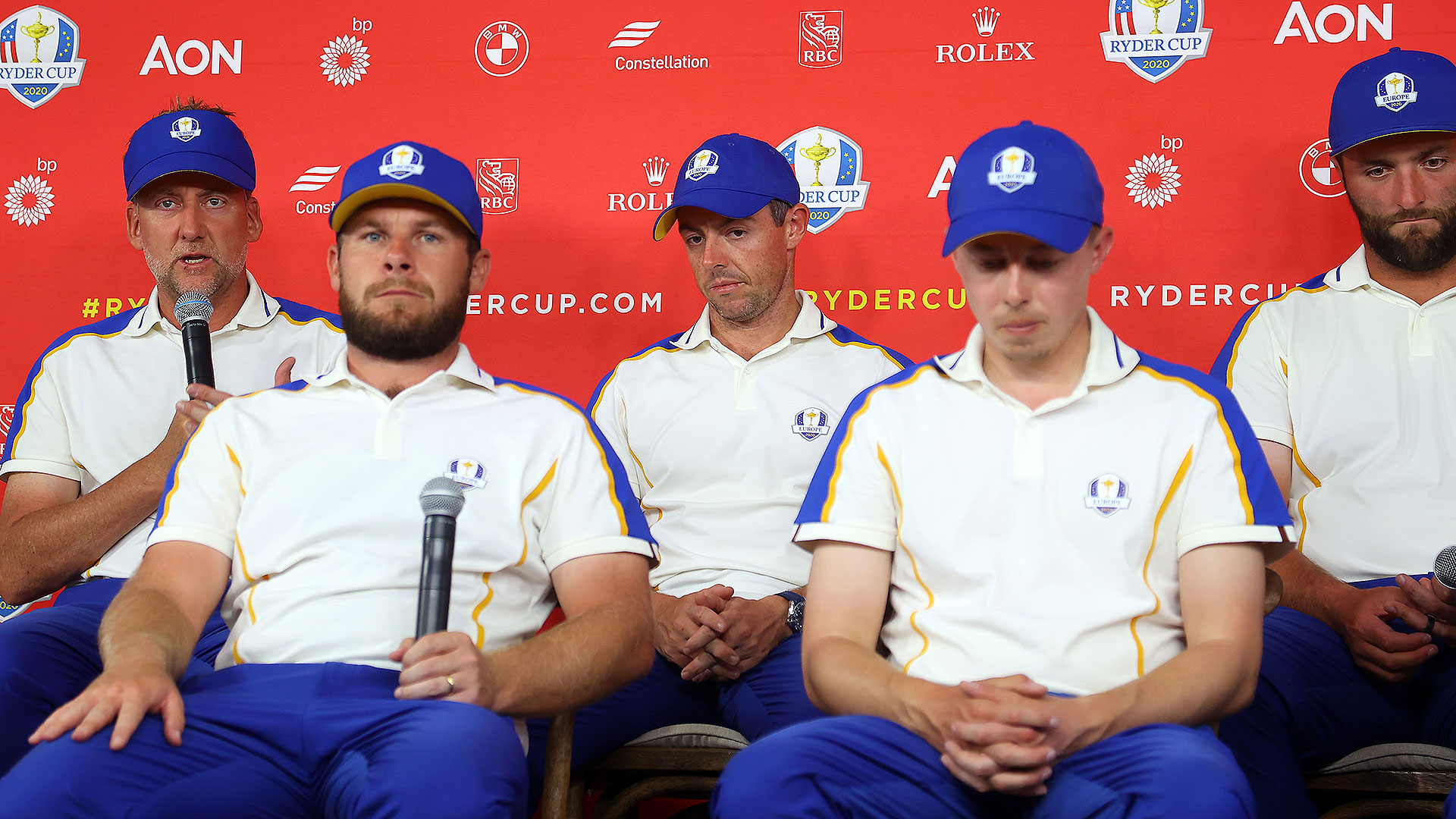 The Europeans trailed from start to finish at the 43rd Ryder Cup, which finished in a 19-9 defeat for the away team.

Here's a look back on how the European players performed at Whistling Straits with a subjective grade attached (click here for U.S. Ryder Cup team report cards).

Why the grade? Expect anything different from the world No. 1? He dazzled all week long, gaining the admiration of both the partisan crowd and his opponents. In singles he merely ran out of gas – and into a red-hot opponent.

Why the grade? Curiously left out of one of the foursomes sessions, but he didn’t have the same spark as Paris. Never led in his tied singles match with Jordan Spieth, either.

Why the grade? The last qualifier into the team, he was barely noticeable while compiling a winless record.

Why the grade? Entered the cup in arguably the worst form of any player on either side, but he stepped up in some key moments to earn 1 ½ points. Missing, strangely, were his usual emotional outbursts.

Why the grade? The team’s heart and soul, McIlroy sleepwalked through the first two days before finally waking up in Sunday singles, when it was too late. His emotional interviews afterward told the story – he had let down his team, and he knew it.

Why the grade? What do Fitzpatrick and Tom Haliburton have in common? They’re the last players to play in multiple Ryder Cups without earning a single point. Fitz made a mess of two of the last three holes to lose a late lead and seal the historic defeat.

Why the grade? Look, the Englishman was far from perfect, but he ran into a three-day buzzsaw. In all four matches he played Dustin Johnson – who became just the fourth player all-time with a perfect 5-0 record.

Why the grade? Everyone knew Harrington would rely heavily on his talented rookie, but Hovland didn’t really deliver, at least not up to expectations. A disappointment, to be sure.

Why the grade? In what was surely his final appearance, Westwood went out a winner, stealing two of the last three holes to take his singles match. That snapped a streak of six consecutive losses in the Ryder Cup for the presumptive 2023 captain.

Why the grade? Teamed brilliantly with Jon Rahm in partner play, and he became the all-time leader in matches won. Even after a convincing singles loss, Garcia displayed a certain warmth and grace – little wonder he was given the sportsmanship award afterward.

Why the grade? One of the few Europeans who showed a pulse, Lowry’s gutsy putt on Saturday afternoon gave the Europeans a sliver of hope heading into singles. His passion and love for his teammates was endearing.

Why the grade? The Postman no longer delivers on weekends. Since Medinah, he is now 1-5-2 in partner play, but at least he remained unbeaten in singles (not that it mattered by then, of course). Here’s thinking it’s his final cup appearance.

Why the grade? There wasn’t much Harrington could do – his team was woefully overmatched. But he also didn’t do himself any favors, opting for fewer captain’s picks (while his counterpart wanted more) and then cobbling together a few curious lineups when the deficit was growing. Someone was going to have to oversee a team that was in transition; unfortunately for Harrington, he was that guy.