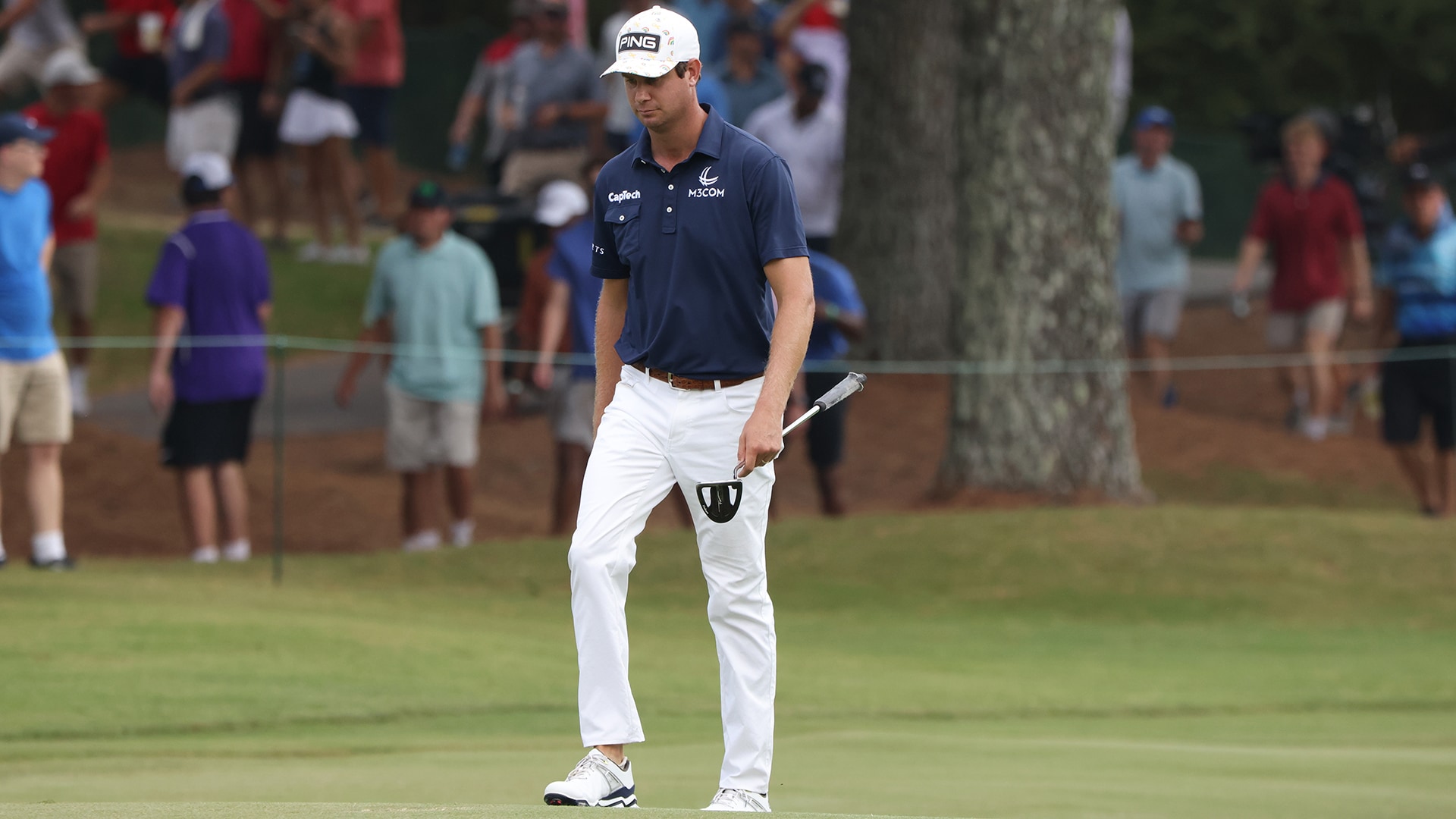 MEMPHIS, Tenn. – There comes a pivotal moment in every golf tournament, and here arrived the one that decided the WGC-FedEx St. Jude Invitational.

The final group of Harris English and Bryson DeChambeau hurriedly charged onto the tee of TPC Southwind’s par-3 11th hole. They’d been playing catchup for more than an hour, ever since DeChambeau’s adventure with a boundary fence on the sixth hole and his game of Operation in the pine straw on No. 7. They fell a hole and a half behind the group in front of them, and despite repeated warnings there seemed little way to make up the difference.

Not with the tournament on the line.

Not with so many holes framed by water.

Not with the wind gusting to 20 mph.

For the final round, the 11th hole measured 155 yards, with an island green, the hole cut five paces from the water’s edge. Storm clouds were rolling in, darkening the sky, kicking up the breeze, the humidity so thick it soaked a shirt in a matter of minutes.

Earlier in the day, Si Woo Kim took a 13 here. There’d been 13 other water balls. English didn’t know anything of that, and how could he? Leading by three, all he knew was that he needed to properly gauge the wind, pull a club, go through his pre-shot routine and execute the shot as expeditiously as possible, preferably in 40 seconds or less.

That’s not English’s preferred tempo, of course. Southern to his core, he talks slowly and walks slower. Time spent on the putting green is half practice, half social hour, the perfect opportunity to throw in a dip and chill. On the range at about 12:30 p.m. Sunday, English set up shop a few bays left of DeChambeau, his silky-smooth swing a startling contrast to DeChambeau’s frenetic energy. English coolly plunged an alignment stick into the turf, draped a towel over the top of it, and wiped the clubface after each strike. In no hurry, even with his tee time approaching, he hit probably 25 fewer balls than his playing competitor, each with the same pre-shot routine in which he gently places his middle and ring finger on his left elbow to simulate his rotation through the ball. Once he’d warmed up, he stroked a few putts and, while working his way through a stick of gum, strode to the first tee as if in slow motion.

But now here we were, the 11th hole about to shatter English’s idyllic calm. One swing, a puff of breeze, and soon he’d tumble all the way to the clubhouse, no way to stop his freefall.

English thought the strike was pure, but his pitching wedge splashed short in the water.

In stepped DeChambeau, moving quickly, also mindful of the time constraints. His wedge sailed through the breeze and splashed long.

Now both were in the drop zone. More calculations. Hurried wedges. Tick-tock.

English made double bogey, his lead trimmed to two shots. DeChambeau was one worse, taking a triple.

Waiting off the 12th tee was a rules official: They were on the clock and officially being timed. They had 40 seconds to play a shot, with the first to hit allowed an extra 10 seconds. One bad time: Warning. Two bad times: A one-stroke penalty. The Tour has often been criticized for its inconsistency in enforcing this policy – it was a ruling, after all, that set back the final group on Sunday – but neither player was about to test them. They nodded and speed-walked ahead.

“You know it’s coming,” English said, “and you just have to turn up the pace.”

TPC Southwind has arguably the most difficult collection of par 3s on the Tour schedule, and the 14th is no exception: 181 yards, over water, the pin tucked near the right edge. If there’s any spot to take an extra beat or two, it’s here. And yet ...

“It’s just rushing a little bit and not giving it that extra 10-second thought on what we’re actually doing,” English said, “because you don’t really have that much time to spare.”

As soon as English made contact, he knew where his tee shot was headed. He released the club, his ball drowning well right of the green. The crowd in the grandstand gasped. Ahead by three shots three holes earlier, there soon would be a four-way tie for the lead. For the first time, English looked exasperated. He raised his hands in frustration. He wiped sweat from his forehead. His gum-chewing morphed into a full-blown chomp. Tick-tock.

“I hate rushing,” he huffed at one point, but there was no way to call timeout. Or to take a breath. Or to even make a quick run to the restroom. 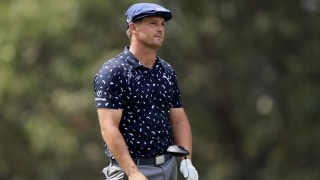 Bryson DeChambeau's par on the sixth hole of the WGC-FedEx St. Jude Invitatonal was an erratic sequence.

DeChambeau was growing frustrated, too, not just with his play but an increasingly hostile crowd. It had been another interesting week in a year full of them, his return to the Tour overshadowed by his controversial comments about COVID-19. Battling fatigue after losing 10 pounds and wary of the attention after another PR nightmare, he looked subdued during what became a joyless sprint around Southwind.

When he started tumbling down the leaderboard, he proved easy fodder for the mob.

“C’mon, Brooksy! Where you at?” one teased him.

Fed up, DeChambeau finally shot back: “He finished, like, four or five hours ago.”

As DeChambeau lined up his approach into the 12th green, one hollered: “Hit in the water, Brooksy!” DeChambeau’s shot settled some 30 feet right of the flag. “Not your best!” another chided.

Behind the green, DeChambeau’s caddie huddled with one of the group’s security guard: The hecklers are back, again. Keep an eye on ’em.

“It kind of sucks,” English said, “and obviously he hears it and it affects him a little bit and he doesn’t like it, and I think that causes them to do it more. It just sucks that that’s out here right now, that they’re trying to irk people like that. It’s just unfortunate.”

DeChambeau’s bid for the WGC title ended on the 15th green, when his wedge rocketed off the front fringe and scampered onto the back edge, 60 feet away. Unable to take the proper time to judge the break and speed – tick-tock – he three-putted for bogey. A CBS cameraman kept his lens trained on DeChambeau, waiting to document the reaction, an outburst if he’s lucky. Instead, spotting the camera, DeChambeau turned and waved.

A parade of “Broosky!” hecklers followed him all the way to the ugly, dispiriting finish. DeChambeau was unavailable for comment after the round.

Tied for the lead with three holes to go, English still had a chance, a good chance, especially with an upcoming par 5, but everywhere he turned there was that same damn official. He trailed about 100 yards behind in a golf cart, his finger waiting to start his cellphone timer.

“You definitely start the day in one rhythm and then you get out of that having to walk faster, having to do everything a little faster because you don’t want to get a bad time,” English said. “It’s just tough to rush like that.”

The 16th is the easiest hole on the course, reachable in two with a mid-iron for most in the field. But English went left rough, left rough, right rough and a 12-foot miss – one of only seven bogeys all day. Looking to go wire to wire, he’d dropped out of the solo lead.

The next two holes, like the entire back nine, were a blur: A scrambling par on 17, then a dart to 13 feet on the last. Here it was, one final gasp, and nothing was going to stop him from taking his sweet time. The official wouldn’t dare ding him now. English examined the putt from every angle, made a few calm practice strokes ... and then hit a putt that never even scared the hole.

“Ladies and gentlemen, there’ll be a three-man playoff!” boomed a voice over the loudspeaker, and neither player in the final group would be a part of it. Perhaps it was little wonder they never moved back into position – English (40) and DeChambeau (41) needed a combined 81 strokes to complete their back nines.

The playoff would start without them, the participants zipping by in golf carts as English (73) and DeChambeau (74) trudged across the range and to the scoring area to sign their cards. 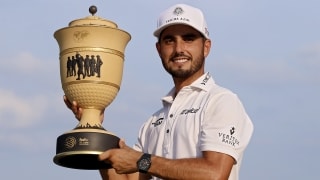 English emerged from the clubhouse a short time later and answered every question: About his disappointment. About how the slow-play warnings affected him. About what he could take from the experience.

“I don’t feel like I’m a slow player, but it makes me feel like I’ve got to rush and you kind of have that in the back of your head,” English said. “That’s something I’ve told my caddie I’ve got to get better at.”

English gathered his belongings and headed to the parking lot as a roar rang out: Abraham Ancer had drilled a 6-footer on the second playoff hole to capture his first PGA Tour victory, a title English surely felt could have – and maybe even should have – been his had the circumstances been different.

“It is what it is,” he said. “I’ll learn from it and hopefully be back in that situation again.”

For the first time, English wasn’t chewing a piece of gum. He’d stuck with the same stick all day, but not out of superstition.

He offered a pained smile. “Didn’t have the time to reach in the bag and grab another one.” 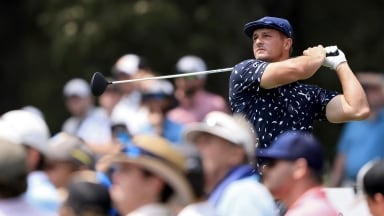 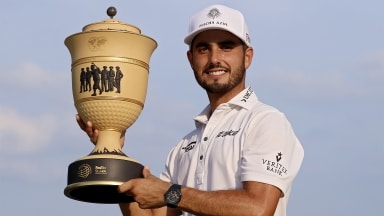 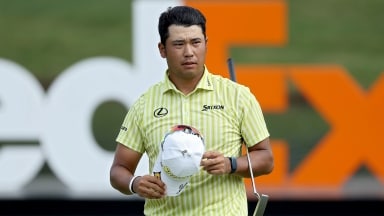 Hideki Matsuyama and Sam Burns each lipped out crucial putts in the playoff Sunday at the WGC-FedEx St. Jude Invitational.