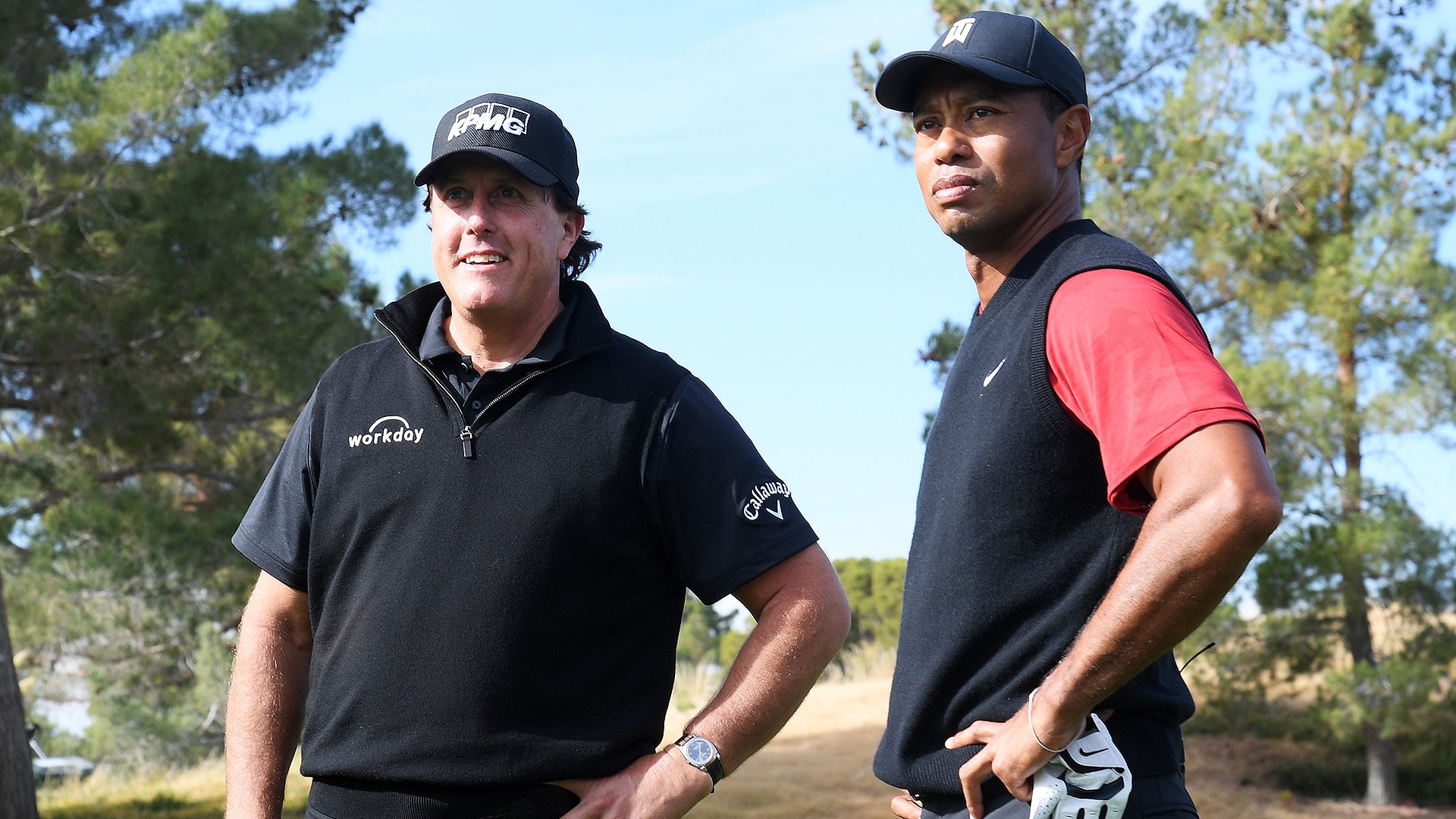 Each week on GolfChannel.com, we’ll examine which players’ stocks and trends are rising and falling in the world of golf. This is the year-end version of Stock Watch.

Brooks (+10%): Golf’s preeminent big-game hunter bagged two more majors in 2018, and now Koepka has his sights set on becoming the most dominant player of his generation. Injury is the only thing that can stop him.

Tiger (+9%): No one thrilled this year like Woods, whose appeal might be bigger than ever after climbing out of the abyss. His heart-stopping runs at The Open and PGA led to a storybook win at East Lake. No hyperbole: This was a year that golf fans will remember forever.

Bryson (+8%): In the non-Woods division, DeChambeau is the most interesting character in the sport – a compelling mix of cockiness and curiosity, with eye-catching technique and unassailable self-belief. His four wins this calendar year were no fluke. He’s just getting cooking.

Francesco Molinari (+7%): Hey, 2018 might be as good as it ever gets for Frankie, 35, and that’s OK – his BMW PGA trophy, Open title, 5-0 Ryder Cup and Race to Dubai award were memories he’ll cherish for a lifetime.

Comebacks (+6%): From Tiger to Angela Stanford to Lee Westwood to Charles Howell III to Webb Simpson to Bubba Watson to Danny Willett, the theme of the year was players who dug deep, persevered and experienced a winning feeling they thought might never return.

Justin Rose (+5%): Two decades after his career began with 21 consecutive missed cuts, the classy Englishman climbed to the top of the mountain, reaching No. 1 in the world for the first time in his career.

Ariya Jutanugarn (+4%): This year she had one of the most complete performances of the Race to the CME Globe era, taking another major and sweeping all of the meaningful awards. Just 23, she’s nowhere close to reaching her full potential.

Cam Champ (+3%): The hype machine is on overdrive now, after fans got a look at Champ’s titanium-denting power during the fall. On the modern tour, a driver-wedge into every hole is a recipe for success.

Tony Finau (+2%): Now the ninth-ranked player in the world, the only thing he didn’t do in 2018 was win, despite four runners-up and numerous other close calls. Better believe Finau will figure out that missing piece before long.

New schedule (+1%): Some of the C-level events will suffer greatly, but the cadence to the 2019 season – with at least one big event from March through August – is something that we all can get behind.

DJ (-1%): His position here is unfair, perhaps, seeing how he won three times and dominated several statistical categories, but Johnson also lost his No. 1 ranking, went major-less for another year of his prime and got overshadowed by fellow bash brother Koepka. His talent keeps us wanting more.

No. 1 revolving door (-2%): The No. 1 ranking changed hands a record nine times (with the potential for 10 before the end of the year) on the men’s side. Every sport fares better when there is a dominant player. Golf doesn’t have that, nor will it any time in the immediate future, it seems.

Jordan (-3%): Statistically, he regressed across the board and also showed a vulnerability on the greens that seemed impossible earlier in his career. Spieth has been a winner his entire life and will figure it out, but 2018 at least gave some reason for concern.

Hideki (-4%): The Japanese star followed up his stellar 2016-17 campaigns with his worst year as a pro, compiling only three top-10s – all in limited-field events – battling a variety of niggling injuries and dealing with life as a new father. He’s a prime bounce-back candidate for 2019.

Wiesy (-5%): This holiday season we wish for one fully healthy year for Michelle Wie, just to see what she’s capable of doing. Just one. Please.

Bill Haas (-6%): A horrifying car accident in February derailed his year, and knee surgery set him back even further, and now just 36, the six-time Tour winner is fighting for full status again. Wish him well, but once the putter goes (he’s adopted the arm-lock method), it’s hard to get it back.

Phil (-7%): His embarrassing display at Shinnecock sent a clear message to the golf gods – that he’ll never capture that elusive U.S. Open. It also gave him bad mojo for the rest of the year, as he slumped into and through the Ryder Cup. His window for wins is closing, fast.

New rules (-8%): Of the few dozen rule changes, none will have a bigger impact on the pro game than tapping down spike marks on the greens, putting with the flagstick in (if Bryson is to be believed) and caddies no longer being allowed to line up their players. It’s bound to get messy, as always.

The Match (-9%): From beginning to end, the Tiger-Phil duel was a dud. There are a million ways to fix these made-for-TV events – and that includes getting rid of the $19.99 price tag. The novelty has worn off, so now they should just make it as entertaining as possible.

U.S. Ryder Cup team (-10%): Those good vibes from Hazeltine and Liberty National? Long gone, after a blowout loss and after Patrick Reed threw his former partner, the captain and the team’s living legend under the bus. It’s easy to discount Reed’s sharp criticism as a bitter player deflecting blame, but he made some valid points about an underlying buddy system that needs to be addressed before 2020.