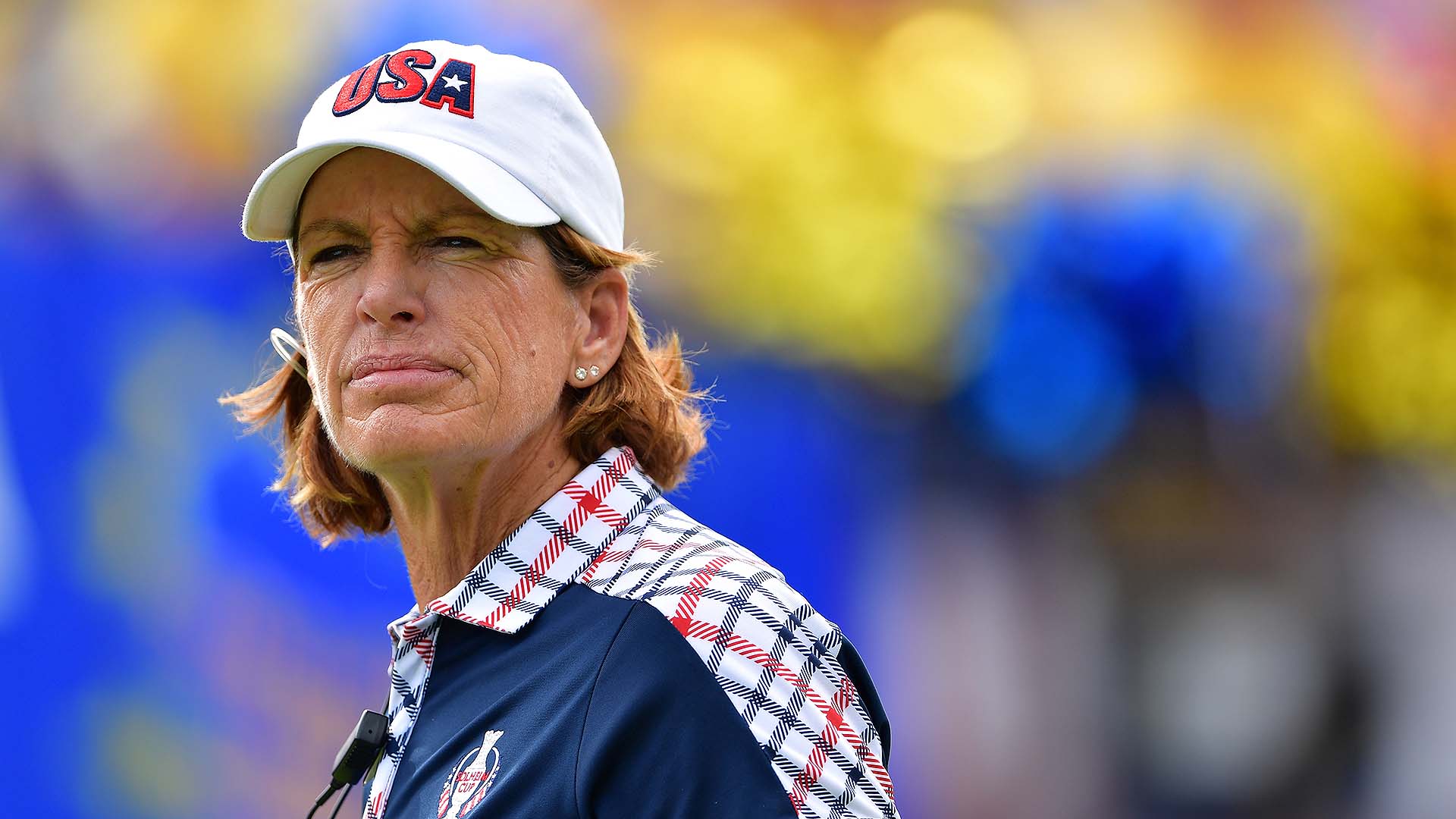 Juli Inkster could have some tough decisions to make if the competition to make the U.S. Solheim Cup team continues to play out this way.

With an influx of young players who have little international team experience, Inkster is looking at a major overhaul of the American roster fans have grown accustomed to seeing in the event.

The turnover’s a bigger deal with the United States traveling to Scotland for a road game with the Europeans.

Inkster likes the young talent she sees emerging, but . . .

“I also have to think about who will be able to handle the pressure of playing a road game,” she wrote Tuesday in her Solheim Cup captain’s blog. “It’s going to be really hard playing overseas. The fans are going to be loud and loyal behind Europe, and I need to find players who can handle that situation. It takes a special player who can take the cheers for her opponent and turn them to something that motivates her and not distract her.”

Michelle Wie is out for the year with injury.

Brittany Lincicome is out on maternity leave and also won’t be able to play.

Cristie Kerr, the all-time American Solheim Cup points winner, hasn’t cracked the qualifying standard yet and would need a captain’s pick to make the team if Inkster had to announce her two picks today.

Stacy Lewis and Gerina Piller, two team stalwarts, also are on the outside looking in as they continue to adjust to life as new moms on tour.

Angela Stanford, another Solheim Cup veteran and the only American to win a major in the last 10 major championships staged, also hasn’t cracked the qualifying standard.

Brittany Lang is struggling with form.

Paula Creamer has never missed a Solheim Cup since turning pro in 2005. She was 3-1 helping the Americans win two years ago and has won more Solheim Cup points (19.5) in her career than any American besides Cristie Kerr (21), but Creamer needs to do something special this summer to keep her run alive. Morgan Pressel is 10-7-2 in five Solheim Cups. Like Creamer, she is showing improving form this summer. They’re hoping to catch Inkster’s eye as partners at the Dow Great Lakes Bay Invitational team event in two weeks.

If Inkster were making her two captain’s picks today, and she was focused on adding a pair of veterans to help her youngsters on foreign turf, she would have Kerr, Lewis, Piller, Stanford, Creamer and Pressel to consider.

“I have an embarrassment of riches to choose from, and it’s a curse because with only two captain’s picks it makes my job harder,” Inkster wrote.

Much can change over the seven events left before the team is finalized. Two of those events are majors, with double points.

Kerr is on the cusp of qualifying, sitting ninth in the U.S. standings. The top eight in points qualify for the team, as do the two highest-positioned Americans in the Rolex Women's World Rankings who aren’t otherwise qualified.

Qualifying is finalized at the conclusion of the CP Women’s Open (Aug. 25). The Solheim Cup is scheduled to be played Sept. 13-15 at Gleneagles in Scotland.

Nelly Korda, Khang, Alex and Altomare would all be Solheim Cup rookies.

The last time the Americans featured four rookies, they lost in a record 18-10 rout. And that was at home, in Colorado in 2013.

It should be noted, however, that the Euros won that year with six rookies on their roster.

Inkster is watching a head-scratching phenomenon unfold for the Americans.

On paper, the 10 players who would make the team today look like they would be one of the weakest bunch of qualifiers to make an American team.

Of course, that’s “on paper,” with stats showing the 10 Americans currently combining for 24 LPGA titles, two of them majors. Thompson has 11 of those titles, and Jessica Korda five of them. The rest of the team has combined for eight LPGA titles.

The 10 qualifiers who made the American team that beat the Euros in Iowa two years ago had combined to win 54 LPGA titles, 10 of them majors.

And that doesn’t include Paula Creamer, who replaced the injured Jessica Korda in Iowa.

Inkster sees beyond paper, though.

Though they aren’t winning much this year, Inkster likes the way they’re regularly getting into the mix.

“What I saw at the KPMG Women’s PGA Championship thrilled me, because of the talent at my disposal,” Inkster wrote in her blog, “and it chilled me, because I know some very deserving players will be left off the team.”

Inkster knows with seven events left, a lot can change in a hurry.

“The next couple months will teach me a lot,” Inkster wrote.

The top-20 finishers in an LPGA event are awarded points. A first-place finish is worth 60 points, second is worth 30, third is worth 28.5 and on down to three points for a 20th-place finish. Points are doubled at the majors.

*Lincicome is on maternity leave.