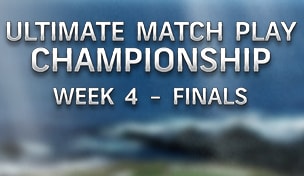 You wanted it, you got it.

By popular demand, universes collide this week in the finals of the Ultimate Match Play Championship.

GolfChannel.com’s showdown of the 16 best players in history is down to Nicklaus vs. Woods. (Click for: Ultimate Match Play overview | Player bios |GolfChannel.com's Bracket Challenge)

As epic clashes go, Jack vs. Tiger might be more electric in nature than Thomas Edison vs. Nikola Tesla, more high-powered than AC vs. DC, Edison’s direct current vs. Tesla’s alternating current.

The Golden Bear vs. Tiger is fantasy golf at its high-voltage best, and now it’s up to you to decide who wins this clash. Your votes this week will decide who prevails in the epic final at Pebble Beach.

So far, you’ve liked Nicklaus and Woods in routs through their first three matches.

More than 10,000 votes were cast in the semifinals alone.

If bookies were laying odds, it’s close to even money.

Those who believe Nicklaus is the best who ever lived point to his 18 major championship titles as all the evidence that matters. Majors are the true measure of greatness, and Nicklaus didn’t just win more than anyone who has ever played the game, he contended more than anyone. He was second 19 times in majors. The fact that Nicklaus finished first or second in 37 majors astounds.

Those who believe Tiger is the best who ever lived point to dominance the likes of which the game has never seen. They point to his unprecedented four-consecutive professional major championship triumphs over the 2000 and 2001 seasons, to his record 15-shot rout at the U.S. Open at Pebble Beach in 2000, his record 12-shot victory at the Masters in 1997, and his masterful eight-shot victory at St. Andrews in the British Open in 2000.

At their best, both Woods and Nicklaus overpowered courses, but Nicklaus gets the edge as the better driver. Nicklaus found the short grass more often than Woods.

At their best, they’re both stellar iron players, but Nicklaus was the better overall ball striker. Nicklaus had to be. He didn’t have the same magic in his short game that Woods has at his best. Nicklaus couldn’t erase as many mistakes as Woods can at his best.

As putters, it’s a tossup. Nicklaus and Woods are the two best clutch putters the game has ever seen. With a championship on the line, nobody has ever been better.

Nicklaus and Woods also had intangible advantages in equal doses.

At their best, they intimidated without trying. When their names hit a leaderboard, foes knew it.

“As you looked at Jack Nicklaus at the first tee, you knew that he knew that you knew he was going to beat you that day,” Tom Weiskopf famously said.

The same deal applied to Woods at his best.