What did we see out of Tiger Woods? That something epic could still be in the tank

Amid the chaos of The Match II – with Phil Mickelson’s woofing and Peyton Manning’s steadiness and Tom Brady’s (very) occasional brilliance – was one important revelation that nearly went unnoticed Sunday.

Nearly, we say, because here was Justin Thomas on the 17th hole, summing up the state of Tiger Woods’ game as Woods reached for his tee before another scalded drive reached its apex:

Sure, this was nothing more than a silly hit-and-giggle for a worthy cause. And yes, Woods’ home club, Medalist, offered more generous landing areas than Brady and Mickelson often made them look.

But still: In his first “competition” in 98 days, Woods looked good – his body and swing so good, in fact, that he reminded us that he’s still capable of producing something epic during this golf season unlike any other. For one afternoon-turned-evening, at least, we could turn our attention from what has been into what still could be.

Though understandably forgotten in this global pandemic, the golf season held such immense potential for Woods. Late last year he brushed off offseason knee surgery and won his record-tying 82nd PGA Tour title, then was easily the best player at the Presidents Cup, where he carved up Royal Melbourne with his precision and posted a 3-0 record as a playing captain. Even though his 2020 debut at Torrey Pines got off to an uneven start, he grinded out a tie for ninth and drove the ball impeccably.

But last we saw Woods, at his Genesis Invitational in mid-February, he labored through four rounds, complained of a tight back and finished last among those who made the cut. Trying to buy time before the Masters, he skipped some of his usual starts – Mexico, Bay Hill, then The Players – prompting concern that he once again was breaking down.

Then came the shutdown, and it’s likely no player on the planet benefited more from a three-month break than the 44-year-old Woods.

On Sunday, he looked healthy and swung freely, hitting every fairway, with a variety of clubs, oftentimes straight down the center stripe. Though woefully out of place in a gabfest, Woods’ pure strikes were all the smack talk he needed. Early in the match, after Phil Mickelson nearly blew his tee shot out of the bounds on one of the long-drive holes, Woods stepped up and blistered one up the gut. “Oh man, I hit it in the fairway,” he cracked. “Right in the middle. Darn it.”

Rust was to be expected, and yet he masterfully shaped iron shots and displayed a deft touch around the greens. One of the only shots he missed was an 8-footer for par – which he attempted with a 4-iron, during a one-club challenge. Even then, he lipped out. 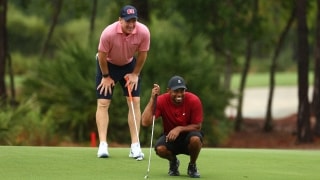 The completeness of Woods’ game and his relative spryness were enough to fuel hopes for a big final push to the year, even though condensed schedules and Woods’ battered body generally don’t mix. The PGA Tour is set to resume in less than three weeks at Colonial, and Woods, on the verge of the all-time wins record, offered no new clues as to when he would return to competition this summer. “It’s going to be interesting” is all he’d offer to Charles Barkley.

Interesting because the Tour’s cloistered new reality might not be appealing to the sport’s most famous star, yet he needs at least some tournament reps before charging into major season.

Interesting because in seven of the first eight events on the upcoming schedule, Woods has either never played them or not made an appearance there in at least 20 years.

And interesting because the playoffs, three majors and Ryder Cup are separated by 15 weeks.

At least Woods appears fit enough to challenge for those titles. That’s more than we could say three months ago.