On cusp of Tour breakthrough, Will Zalatoris 'battled like hell' but just can't bury putts 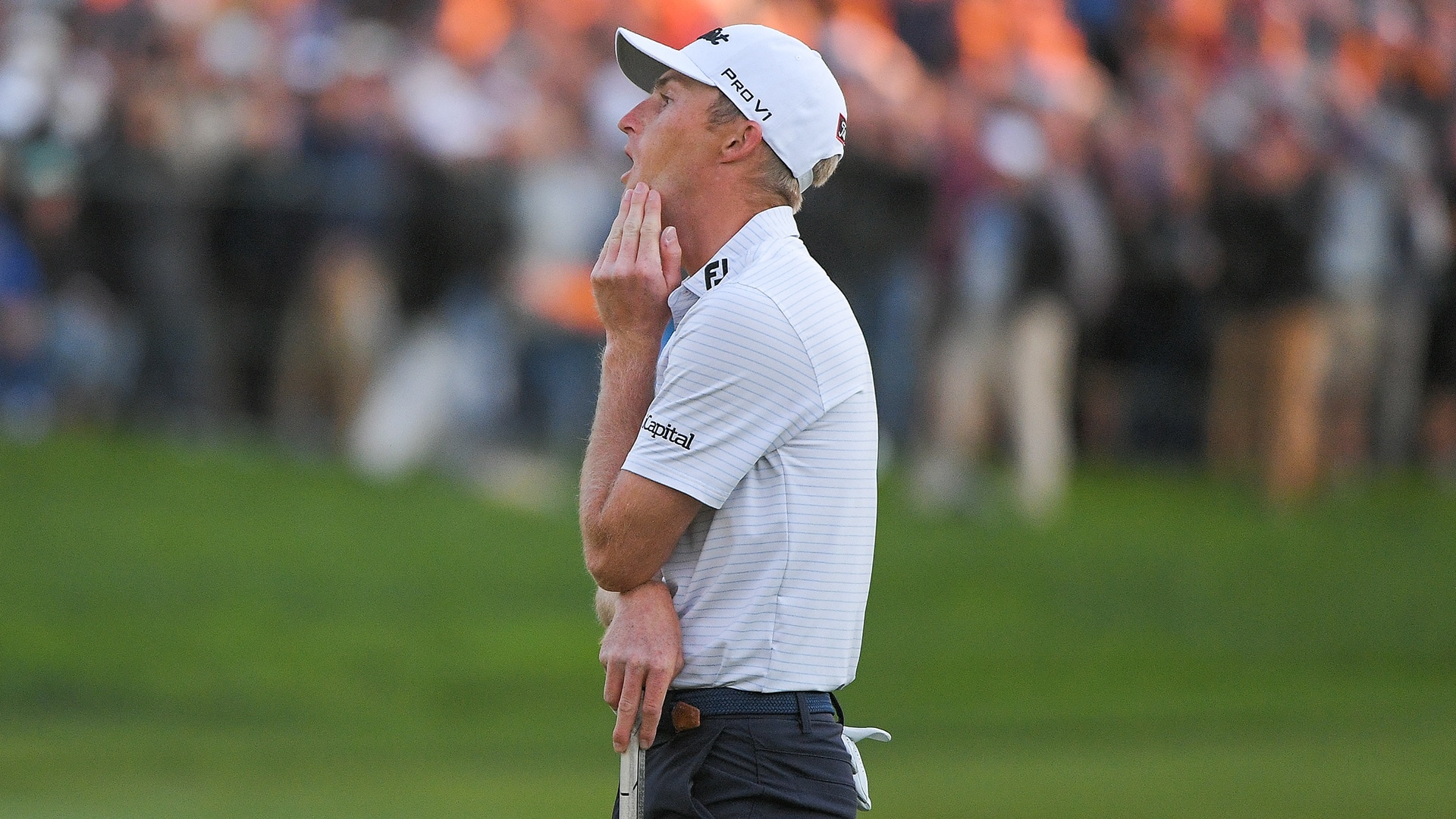 SAN DIEGO – Painfully close all day under the afternoon sun, well, he might as well try in near-darkness. It was 5:34 p.m., the sun had already dived behind the massive grandstands lining Torrey Pines’ 18th green, and Will Zalatoris couldn’t really see.

His caddie, Ryan Goble, closed his eyes, straddled the line and shuffled back and forth, feeling the break of the putt in his feet. He confirmed the initial read: right-center. Zalatoris pressed the long putter against his left forearm, gently placed three fingers around the grip, stroked the 13-footer up the hill and ... missed.

“From what I could see considering the amount of darkness, I thought I hit a pretty good putt in there,” he said.

That was a recurring theme.

The Farmers Insurance Open wasn’t another “piece of s---” setup or a “putting contest week.” No, it was a line-’em-up-and-brawl, your-best-versus-mine slobberknocker that was set up tough enough to rein them in but not fiery enough to separate. That’s exactly the type of challenge Zalatoris relishes; the other day he called himself a “major-championship specialist,” despite having played in only six of them. And it’s the type of challenge in which he excels: He gained a ridiculous 12.45 strokes on the field from tee to green.

But even ball-striking contests eventually boil down to putting, and the longest putt Zalatoris holed in the final round was from 5 feet, 7 inches. Despite chances on all but three greens, he couldn’t drain the single birdie he needed to pull ahead, for good. He was topped at Torrey Pines – ironically – by Luke List, another uber-talented masher who has battled his share of putting demons.

“Will’s a heck of a player, and he’s got an amazing career in front of him,” List said. “Losing a playoff hole stinks, but I know he’ll have amazing success the rest of his career.”

But Zalatoris' ascension to superstardom must first start with that initial win. This was his best chance yet, and a familiar issue resurfaced.

Zalatoris has struggled on the greens since he was a junior, his yippy stroke reportedly scaring away schools like Stanford and Texas. Searching for answers, Zalatoris adopted the claw putting grip while at Wake Forest and became a two-time All-American and a U.S. Walker Cupper. Still, his putting remained such a glaring weakness that it threatened to derail his promising career. In limited action on the PGA Tour in 2018, Zalatoris gained more than a shot on the field per round with his approach shots but lost nearly 1.8 strokes on the greens. Had he played enough rounds to qualify, that would have been the worst on Tour – by a stroke.

But a year later, desperate for an answer, he switched to the armlock putting method – a technique usually viewed as a last resort for tortured souls, not a tool for upstart 20-somethings. He put more weight on his front foot and shortened his backstroke, all in an attempt to limit what could go awry. Almost immediately, he saw improvement: a 59 a few weeks later, a red-hot stretch on the Korn Ferry Tour, a promotion to the big stage. He is not yet an average putter, but it isn’t a major liability, either. Last season he ranked 122nd on Tour; world No. 2 Collin Morikawa was far worse.

But Zalatoris’ suspect putting received renewed attention this week at the Farmers, especially when his laser show launched him into a share of the 54-hole lead. In the third round Zalatoris produced the best ball-striking performance at Torrey Pines since the Tour began tracking stats in 2004, and yet the conversation was more about how much better his round could have been, if not for two misses inside 5 feet on the back nine. The CBS broadcast crew seemed to yelp every time Zalatoris drew back the putter from close range.

On Saturday, Zalatoris stayed rock-solid on the shorties but never filled it up from distance. He holed just 41 feet worth of putts and never separated himself from a crowded leaderboard. Playing one of the most demanding courses of the year, he was the only player in the top 10 who lost strokes on the greens for the week.

And yet, joining Zalatoris at the top was a kindred spirit.

Long one of the biggest hitters in the game, List had remained winless in 205 career starts because of the shortest club in his bag. Entering the week there seemed to be little reason for optimism on that front (he ranked 208th in putting), but he was brimming with confidence. During the offseason he hired a new putting coach, Stephen Sweeney, and he’d never felt better. They’d diagnosed his worst tendencies (his nerves show up in his legs) and discovered ways to relieve tension to keep his tempo and transition smooth. Those new keys came in handy during a final round that became closer than he anticipated. On the final green, List calmly poured in a 13-footer down the slope to post 15-under 273, and he retreated to the clubhouse for a 90-minute wait. 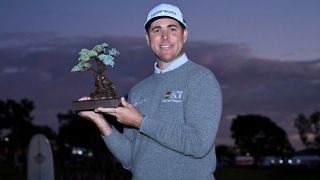 Luke List birdied the first playoff hole to top Will Zalatoris for his first PGA Tour victory at the Farmers Insurance Open at Torrey Pines.

It was a gutsy effort, but List seemed resigned to another runner-up finish after Zalatoris’ tasty approach into the 18th green. His gap wedge ripped underneath the hole, 8 feet away, but his putt lacked the necessary speed and conviction, diving left in front of the cup.

“I’ve seen enough putts through the years coming down that hill to know that that putt just doesn’t go left,” he said, “and it happened to go left.”

With the final round slotted into primetime, there was barely enough sunlight for one playoff hole; those standing behind the final green couldn’t even track the ball’s arc. But the deteriorating conditions didn’t seem to bother List, who stuffed his wedge for a kick-in birdie. “That’s a championship shot right there,” Zalatoris said. He answered with another dart of his own, his ball spinning underneath the hole, 13 feet away. Even though he couldn’t fully make out the read, he didn’t think about calling for an official.

But once again, the putt didn’t drop.

While List celebrated a long-awaited breakthrough with his family, Zalatoris walked off the green with a dazed look. He breezed into the tunnel, running his fingers through his blond hair, and had only a few moments to collect himself before a microphone was stuck in his face. He said the playoff loss reminded him of what happened a few years ago on the Korn Ferry Tour, when he horseshoed a 15-footer on the last green to lose, then came back the following week and won for the first time.

“I want to go get next week, it’s pretty simple,” he said. “I’ve got no regrets today at all. I battled like hell and handled myself really well. I had my chances, for sure, but that’s just the nature of this game. It’s hard to win out here.”

And it’s even harder with an uncooperative putter. Few understood that better than List. 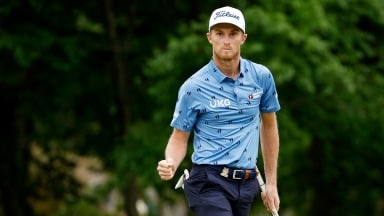 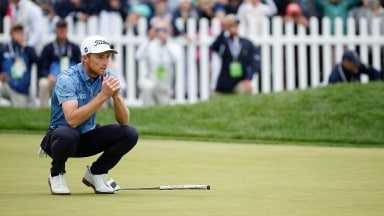 Down this road before, Zalatoris still confident

Will Zalatoris earned his third major runner-up at the U.S. Open. He won't let it deter him from the ultimate goal.