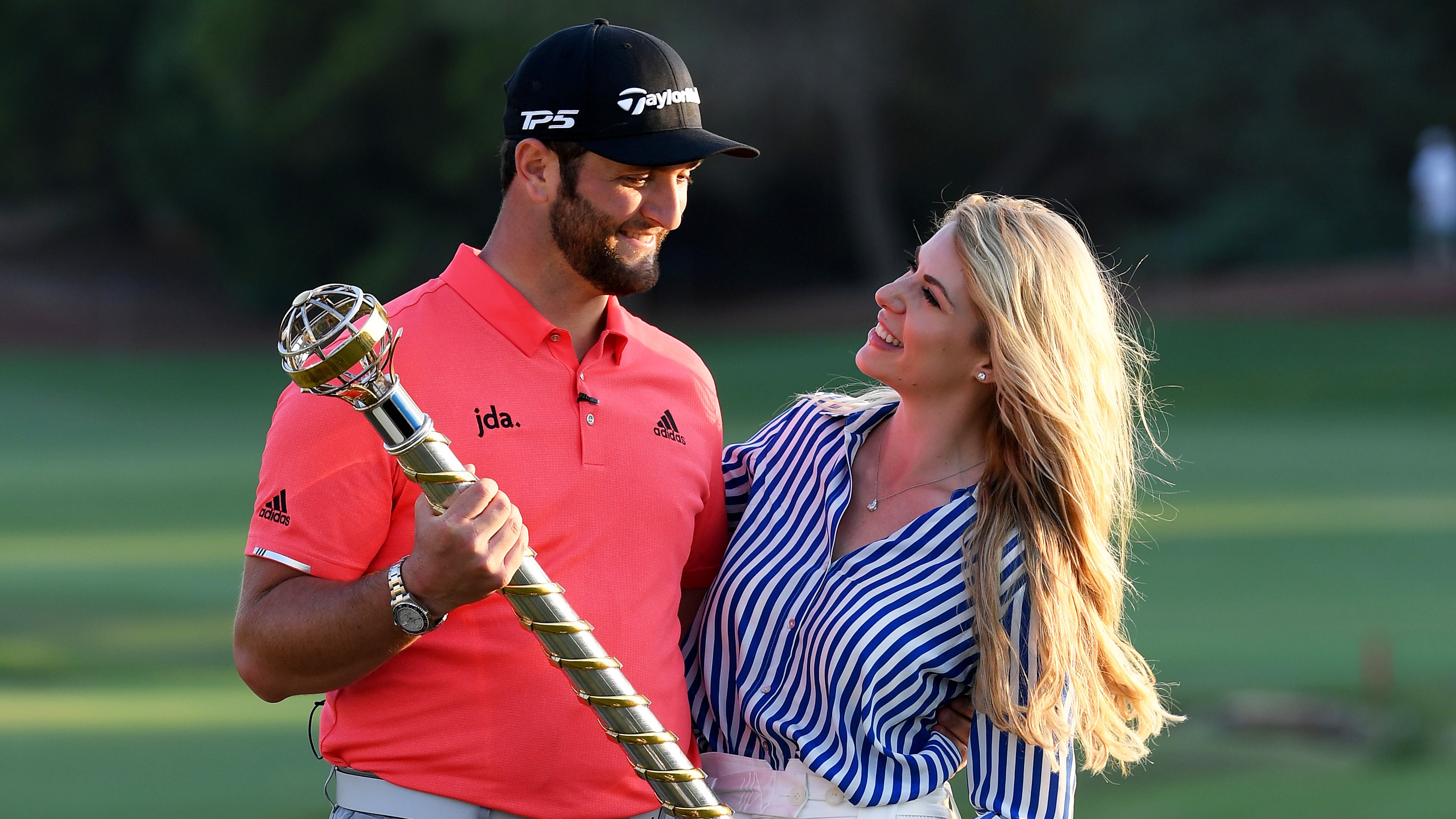 Check it out on Google. You’ll see the resemblance. Jon Rahm looks like a heavyweight boxer from another era — the Argentine Oscar Bonavena, or even the great Rocky Marciano — with his square Don Shula-like jaw, thick through the trunk of his body and hard to move off a spot. Plenty of knockout power, too.

But Rahm professes to be a lover, not a fighter, despite the irascible nature that flares in competition.

“I am not the same person when I’m competing on the golf course to what I am off the golf course,” he says. “When I’m home I’m a much more relaxed person. I like to have fun, you know.”

He calls Arizona home these days, and it includes his new bride Kelley Cahill.

“We met in college,” he recalls with a smile. “Both student athletes at Arizona State, same year, she was a track athlete, threw javelin.” 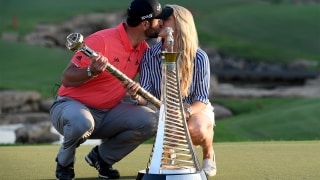 The best images of Jon Rahm with his fiancée Kelley Cahill on and off the golf course.

“She has a great arm,” I tell Rahm. “I saw a video clip of the two of you throwing the football over at TCU and you also ran a nice route.”

“I’m running by myself so at least it looks like in some way I’m going fast,” Rahm cracks.

“You look like you’d be a good shot putter or discus thrower,” I shoot back.

“I would say I can throw most things pretty far,” he says.

“Unfortunately, I have done that before,” he says, laughing. “Yeah, not proud of it.”

Rahm has been described as a hot head.

“I prefer passionate,” he says. “I have a love for this game and a passion for what I do, and of course when I miss shots, I expect a lot of myself and I’m not happy.”

Tim Mickelson, who coached Rahm at Arizona State before taking brother Phil’s bag, offers this explanation: “Jon cares about winning,” he said. “So when he does hit a bad shot he takes it out on himself in a way that is external, he can’t internalize it, he has to get it out. But what Jon is really good at is by the time he gets to that next shot he’s already been able to get it out and he’s done with it.”

That’s not unlike Tiger Woods, and, as my colleague Brandel Chamblee has pointed out, Rahm is among the best in the bounce-back stat category, in fact fourth last season. Still, Rahm doesn’t like the look.

“Sometimes it comes out the wrong way and really bad and whiny and sometimes childish,” he concedes. “It’s something I’m trying to change, I’m not proud of some of the things that I’ve done. Not at all. I hate it. And I’m trying to slowly get better. I don’t think anybody can deny that. Over the last three and a half years that I’ve been a pro, it’s slowly gotten better.  It’s a work in progress.”

“What does it mean to be Basque?” I asked.

“It’s like a national sport to argue,” he says with relish. “I’m extremely hardheaded. I’m stubborn as can be. I mean, Basque people, we’re passionate and very loyal.”

Though Rahm’s from the North, it was an event in the Southern part of Spain, the 1997 Ryder Cup at Valderrama, that originally drew Rahm and his family to golf. Rahm had developed good hand-eye coordination playing goalie in soccer as well as a Basque game called pelota that is a bit like jai alai, so from the start he had an excellent short game. At 13, he began working on his distinctive full swing with the Spanish golf coach Eduardo Celles.

“He made me swing shorter” says Rahm. “I had a very strong grip and was really overswinging, trying to hit high hooks. And he said, 'No, let’s hit it straight first.' So, we went a little bit shorter and I try to create distance that way, and it helps that I have a pretty powerful core and leg drive.”

In 2012, he landed at Arizona State, where he would eventually win the Ben Hogan Award two years in a row, becoming the No. 1-ranked amateur in the world for a record 60 weeks.  He also finished 5th at the Waste Management Phoenix Open while still in school.

“I saw a kid come in that was very just raw in life,” remembers Mickelson. “Because when he came to ASU that was the first time he ever came to the United States. And I saw him blossom as a player, but also, he matured so much as a person. His English and his vocabulary are probably better than most of the guys that I’ve coached where English is their first language.”

Golf journalist Juan Guillen covers primarily Latin players and told me that Rahm is the most American of all the famous Spanish players.

Rahm doesn’t disagree. “I’m the only one who came to college here, stayed four years of college and that actually lives here,” he explained. “I think the biggest thing, though, besides living a more American lifestyle, is the accent. My Spanish accent is very thin.”

As to how he learned to speak English so well, Rahm wanted to clarify what’s become one of golf's urban myths — that he taught himself the language by listening to rap music.

“I know everybody loves the listening-to-rap story but the No. 1 contributor to me speaking English the way I do is my change in degree,” he says. “I went from a business communications major to strictly communications, and all the public speaking classes helped me get to this level. What rap did for me was memorizing lyrics and Kendrick Lamar was a big influence.”

“If I’m not mistaken,” I remind him, “you were back stage at a Ludacris concert a few years ago in Atlanta. And there are a couple of golf-centric Ludacris songs. 'Number One Spot.'” Rahm nods knowingly, and smiles. “'Growing Pains,'” I toss out. He laughs, and then, well versed on this subject, he interjects, “'Moneymaker.'”

That he is. And there’s another Luda’ joint that works. 'How Low.'

I was on the call last summer for The Dubai Duty Free Irish Open at Lahinch, a quirky, fun links track on Ireland’s southwest coast. Rahm came from six back the final day with 62 to win. Jim “Bones” Mackay was our ground reporter following Rahm. I asked Bones what he loves about Rahm’s game.

“You have to,” says Rahm. “You can’t get complacent if you have a one-shot lead with four to play. You’ve got to try to make it two because most of the time four pars on the last four holes is not gonna cut it, it’s as simple as that.”

What sometimes gets lost in assessing Rahm is just how immersed he is in not simply being great, but in the great players of the past.

“I love the sport” he says. “I love the history of the sport. I love watching old tape, and you can always learn something from somebody.”

“Yes, I have,” says Rahm. “And what strikes me as how consistent he was with that old technology. Plus, his knowledge of the sport was so impressive, what he was able to figure out on his own.”

“How about Trevino?” I wondered. He lit up. “We have the same backswing, so hopefully I can get to be a six-time major champion as well,” Rahm replies, smiling the whole time. “What’s unique, too, is that Trevino was the only guy who’d be out there jawing with the crowds, still able to perform. I mean, he was such a joy to watch.  And talk about getting the best out of what you’re born with. He wasn’t the tallest, he couldn’t hit it very far, but man he was able to create shots.”

Keep in mind, Rahm’s just 25 years old. He’d have had to do a deep study of Trevino to deliver such a spot-on analysis.

I keep going, "How about Jack? You might have Trevino’s backswing, but you have the same body type as Nicklaus.”

Rahm loves it. “There are worse golfers to be compared to, I’m not gonna’ lie,” beaming at the comparison. “I think we do have similar games in the sense of we both like to hit a high fade.”

He’s totally tuned in. And now I go in for the easy LeBron alley-oop throw down, with just one word.

“How much time we got right now?” he asks, looking at the substantial European time-piece wrapped around his wrist. “To be that charismatic, to have that aura, I mean basically the Ryder Cup is what it is thanks to him. You know, the short game, the creativity, the unlikeliness of that game to make it and to be an Open champion and to actually become a major champion, the defiance of the odds is pretty impressive.”

One phrase in his Seve riff confirms, at least for me, Rahm’s savvy: “The unlikeliness of that game.”

That was Seve. And Rahm gets it, completely.

Rahm knows the sport. He won’t say it, but he has a chance to someday be held in the same regard as the legendary Spaniards who came before him.

“You want to leave a mark in this game?” I ask.

But what Rahm’s discovering is that to make a mark, at least as he sees it, it takes more than ambition and talent. 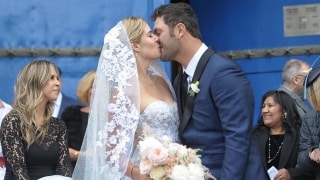 Jon Rahm married Kelley Cahill on Friday at his childhood church, Basilica of Begoña in Bilbao, Spain, and the photos are stunning.

So, not surprisingly, Rahm’s most glowing reviews go to Kelley, whom he married last December in Spain at the catholic church he’d gone to with his grandmother as a child.

“The No. 1 person, and I’m always going to say this, who has contributed to my life to help me be able to be the best is Kelley,” he says. “Because being a golfer, and Jack Nicklaus always said this, can be a very selfish life. And Kelley gets that, as an athlete she understands that, so she encourages me to practice, helps me stay on the diet,” and here Rahm pauses and laughs before continuing. “I know, I know people are going to look at my size and say, ‘diet, sure,’ but for me it’s not to stay thin so much as it is to be healthy because I do like to eat. But really, if I have a bad day, no matter how mad I am, within one hour, Kelley’s going to do something where I’m going to be fine. It’s as simple as that. She knows me better than anybody else. And I mean I love her to death.”

Which begs the follow up, “When you’re happier in life are you a better golfer?”

“Yes,” he answers. “One hundred percent. I can say most of my best performances are because I’ve been so happy in my life outside golf.”

“So, we can expect some really good performances coming up?” I asked.

“I think it was Jack who also said your career doesn’t really take off until you get married,” he says with a smile. “So, yes, I’m hoping, if my career hasn’t yet taken off!”

Corazon no es traidor. The heart sees farther than the head.