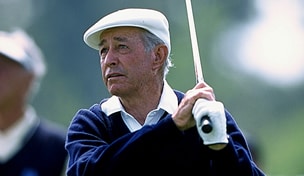 Getty Images
HONG KONG - NOVEMBER 15: K.J Choi of Korea plays his approach shot on the 18th hole during the first round of the UBS Hong Kong Open at the Hong Kong Golf Club on November 15, 2007 in Fanling, Hong Kong. (Photo by Stuart Franklin/Getty Images)  -

He put on a teaching clinic at Ocean Reef in Key Largo just last week.

He’s preparing to shoot the pilot episode for a proposed new TV show called “A Touch of Toski,” a project he hopes will get syndicated. It isn’t just an instructional show. There will be interviews, he said, and “there will be some dancing.” Toski loves to dance.

“I figure if David Feherty can make, I can make it,” Toski said.

At 86, Toski concedes he might be slowing down a bit, but not that much. He’s still coaching PGA Tour pro Ken Duke, and he’s still dreaming big.

The PGA Tour’s leading money winner in 1954, Toski would become even more acclaimed as a teacher. He’s excited the PGA of America is honoring his career by making him one of eight new members who will be inducted into the association’s Hall of Fame on March 12 in a ceremony in Port St. Lucie.

Toski was one of the founders of the Golf Digest Schools and would become the first living instructor inducted into the World Golf Teachers Hall of Fame. At 30, Toski gave up the PGA Tour, just three seasons after he was leading money winner. He said he gave it up because he hated being away from his young wife and their new family. Lynn, his wife of 57 years, died a little more than two years ago.

“My father needs this,” Karin Toski, one of Bob and Lynn’s four children, said of his PGA Hall of Fame induction. “He’s very busy, and he’s happy again, but he needs this.”

Lynn passed after a long battle with heart problems. She so treasured the love letters Bob used to send her while on Tour that she preserved most of them in two leather-bound volumes of books of more than 100 letters.

“Sometimes, I would write her two or three letters a day when I was on Tour,” Toski said. “I go back and read them now, and I’m reminded just how crazy in love I was.

“I still miss Lynn, I still have a heavy heart.”

Toski believes his wife will be looking down at “Old Blue” - that’s what she called him - during next month’s induction ceremony.

“I think she would relish the night,” Toski said.