As the last man standing after a grueling week at Riviera, J.B. Holmes captured the Genesis Open and in the process returned to the top 50 in the Official World Golf Ranking.

Holmes started the final round four shots behind Justin Thomas, but as winds gusted and temps dropped his steady play helped him to a one-shot win over Thomas on a day when the leaders completed 33 holes. It's the fifth win of his career and first since the 2015 Houston Open, and it allowed Holmes to move from No. 100 to No. 42 in the latest rankings. It's his highest ranking since he was No. 41 in the world following the 2017 Masters.

Other winners around the world this week included Ryan Fox, who went from 85th to 66th after capturing the European Tour's World Super 6 in Australia, and Mark Hubbard, who jumped more than 600 spots to No. 472 after winning on the Web.com Tour.

Thomas remained at No. 4 despite his runner-up finish at Riviera, while Si Woo Kim's third-place showing helped him go from No. 62 to No. 52 and likely earn a spot in this week's WGC-Mexico Championship based on his world ranking. Marc Leishman moved up a spot to 16th with a T-4 finish at Genesis, while the same finish helped Rory McIlroy move past an idle Rickie Fowler at No. 8.

McIlroy and Fowler trading places was the only change to this week's top 10, as Justin Rose remains world No. 1 for another week. He's followed by Brooks Koepka, Dustin Johnson, Thomas and Bryson DeChambeau. Jon Rahm stayed at No. 6, with Xander Schauffele, McIlroy, Fowler and Francesco Molinari rounding out the top 10.

After a T-15 finish at Riviera, Tiger Woods remained steady at No. 13 in the latest rankings as he gets set to head to Mexico for this week's WGC event. 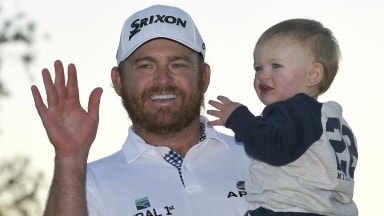 Prize money and FedExCup points breakdowns for winner J.B. Holmes and the rest of the players who made the cut at the 2019 Genesis Open at Riviera.