Monday Scramble: Seeing the beginning and the end? 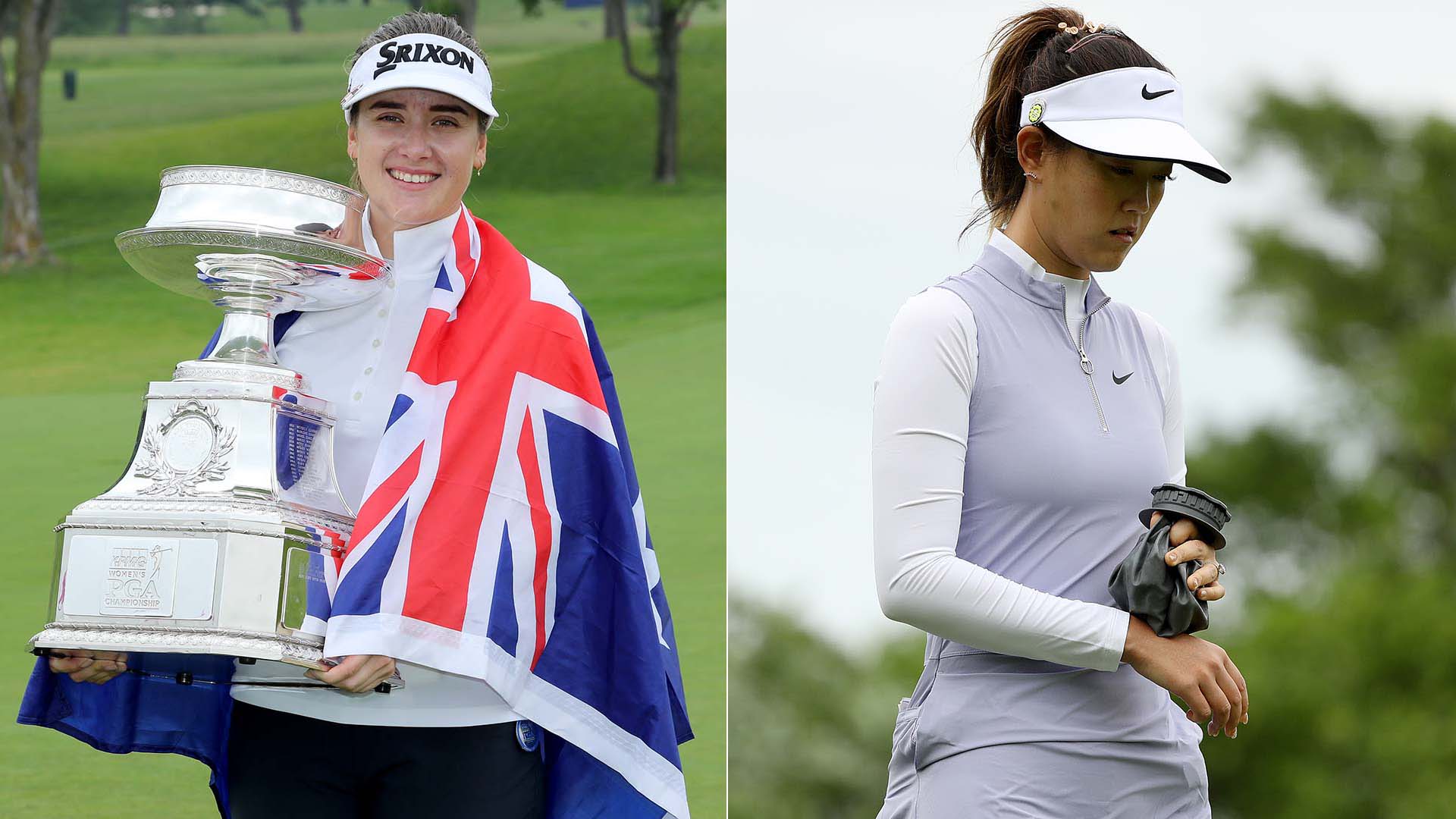 Hannah Green breaks through, Chez Reavie ends an 11-year drought, Zack Sucher becomes the feel-good story of the week, Michelle Wie creeps toward retirement and more in this week's edition of Monday Scramble:

The same venue that brought you out-of-nowhere major champions like Y.E. Yang (No. 110 in the world) and Rich Beem (No. 73) also gave us the unexpected emergence of Hannah Green, a second-year LPGA pro who was ranked 114th in the world and who had yet to contend in a major.

But Green went wire-to-wire at the KPMG Women’s Championship, eyebrow-raising not only because of the players she held at bay but also because, at the second-longest major venue in history (6,860 yards), she was neither long nor particularly straight, ranking T-70 in driving accuracy. Which meant that she still produced incredible shots from the thick, gnarly rough and, even when she couldn’t, was able to muster enough magic around the greens to save par, like her blast out to 5 feet on the 72nd hole to seal her one-shot victory.

Green is the 11th different winner in the last 11 LPGA majors.

1. The happiest person at Hazeltine may have been Karrie Webb.

After all, Green was a former two-time recipient of the $10,000 Karrie Webb Scholarship and routinely stayed with Webb while on the road, learning what it took to compete in a major championship. At the Women’s PGA, Green stayed in a house with Webb, LPGA player Su Oh and fellow scholarship recipients Grace Kim and Becky Kay.

Webb walked every step with Green on Sunday and afterward felt as though she’d won another major. Instead, it was Green who became the third Australian to capture an LPGA major, joining Webb (seven) and Jan Stephenson (three).

With the trophy by her side, Green said to her Aussie contingent in the back of the media center: “Can you come every week?”

2. Green must have taken a page out of Gary Woodland’s playbook.

It pays to give back.

Whereas Woodland has forged a memorable bond with Amy Bockerstette, Green paid it forward with a 7-year-old fan with whom she’d first interacted two months ago at the ANA Inspiration.

It was there that Green gave Lily a golf ball. They saw each other again during the final round of the Women’s PGA, when Lily handed Green a hand-written poem that read, in part, “You can do this.”

With the 8th tee backed up, ⁦@hannahgreengolf⁩ stops to read a poem that 7-year-old Lily Kostner of Minneapolis wrote especially for Green. Lily (far left) is a big fan after Green gave her a ball at the ANA. pic.twitter.com/Wpysow2vpP

Green tucked away the note in her yardage book and referred to it in her most nervous moments. Throughout the round she also looked to Lily and smiled or gave her a thumbs-up. Can you imagine big Brooks doing that?

“It only takes a second,” Green said, “and it can change someone’s life.”

3. It was a taut back nine, but Green never surrendered her lead after a series of miscues by her pursuers.

Ariya Jutanugarn, playing with the leader for the second day in a row, failed to make a birdie during a miserable Sunday 77.

Nelly Korda was only one shot back when she made bogey after having just 51 yards for her third shot into the par-5 15th.

And defending champion Sung Hyun Park badly misread her 10-footer for birdie on the 71st hole, allowing Green to play the final hole with a two-stroke lead.


4. Sad to say, it feels as though we may be nearing the end of Michelle Wie’s career.

That was the takeaway from watching her over the first two rounds of the KPMG, where she shot 84-82 and appeared to be agonizing over every shot. Wie is just 29 years old, but she’s battled a variety of injuries over the past few years, the latest issue that she’s arthritic in both wrists. She’s taken off time and not really noticed any significant improvement. In fact, she looked worse than ever at the KPMG, and through tears she said that she didn’t know how much she had left to give.

That might just be a frustrated athlete talking a few minutes after finishing an 84, but at this point playing can only do her harm.

For her sake, she needs to take off the rest of the year and try again in 2020. (Why she decided to come back to the longest course in tournament history, with 3 1/2 -inch rough and bum wrist, is another matter.)

Only then can she know whether her career is truly over.


5. It wasn’t pretty, but Chez Reavie ended a 3,983-day winless drought by taking the Travelers Championship.

What should have been a cakewalk – he led by six at the start of the day – turned into a tense battle with local favorite Keegan Bradley, who trimmed his deficit to just a single shot as he played the 71st hole.

That’s where Reavie rolled in a 14-footer for birdie while Bradley pulled his tee shot into the fairway bunker, airmailed his approach, thinned his pitch shot into the water and took double.

Just like that, order was restored, and Reavie was a winner for the first time since 2011.

As colleague Nick Menta writes, the T-2 was a life-changing moment for a journeyman pro. 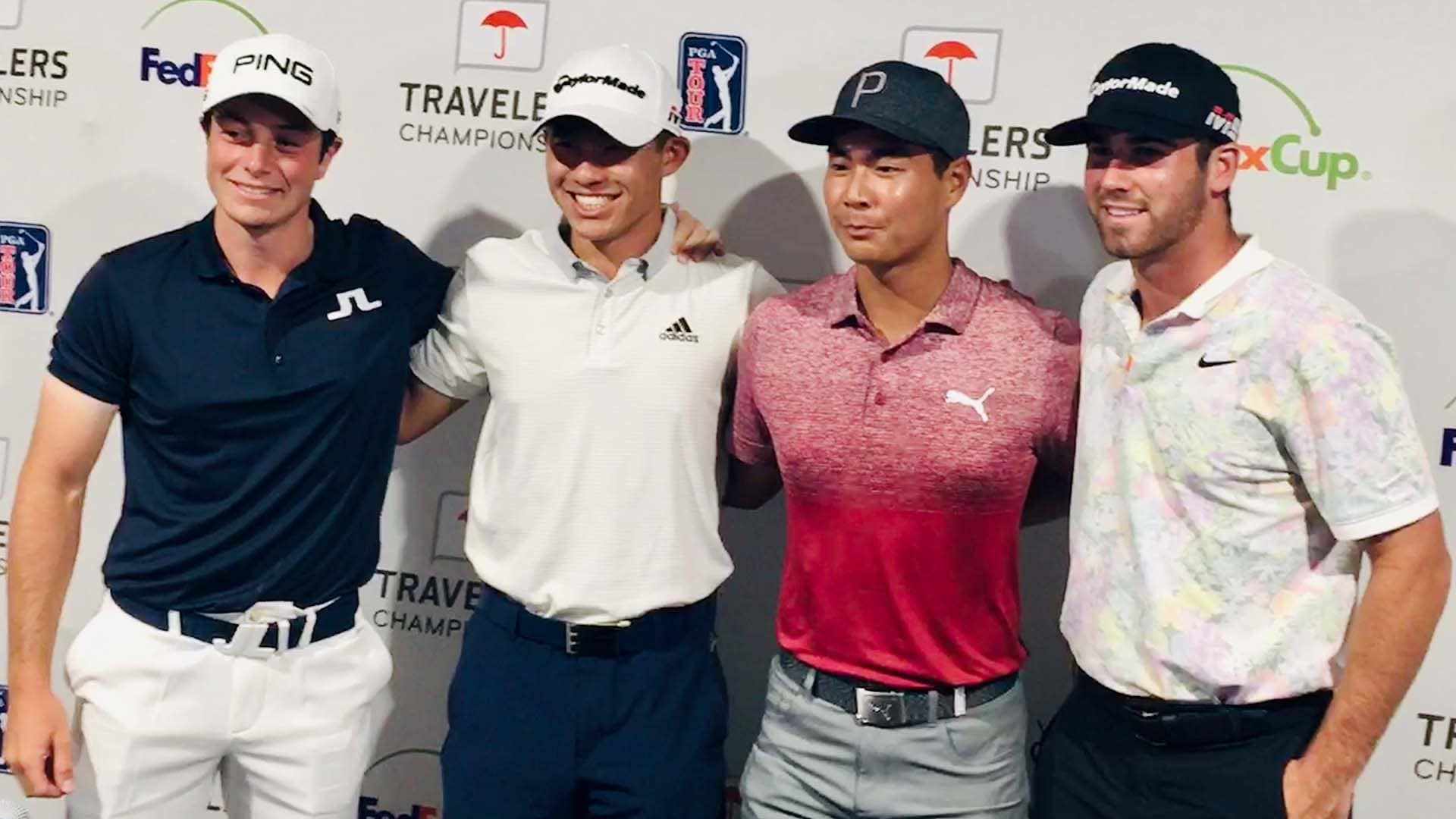 7. All revolutions have a starting point, and for the decorated Class of 2019 (even if some didn’t, or won’t, graduate) that point came last week at the Travelers.

Collin Morikawa (third start) and Justin Suh (second) had already gotten their pro careers started, but for NCAA champion Matthew Wolff and Hogan Award winner Viktor Hovland it was time for them to show off their new apparel and equipment deals and officially join the play-for-pay set.

The early returns were uninspiring – only Morikawa finished in the top 40 – but it was interesting to see the PGA Tour embrace the newcomers, putting them together for a pre-tournament news conference and then showcasing Wolff (after a fan vote) in the featured early coverage on Friday.

Typically, Tour execs are in wait-and-see mode for the next big thing, but the rules appear different for the heralded Class of 2019. They're that special.


8. The disparity between Major Brooks and Regular-Season Brooks continues to confound, after his lackadaisical week at the Travelers in which he shot over par three of the four rounds.

At least this non-major week no-show was justified: He was fried from contending deep into the final round at Pebble Beach, where he was trying to become the first player in more than a century to capture three consecutive U.S. Opens. That coming a month after his hard-fought victory at the PGA, his fourth major in his last eight attempts.

Koepka has earned some much-needed time off, but he’s not really going to get it until the end of August. He’s playing next week at the new 3M event in Minnesota and then teeing it up at the Open Championship, the start of what could be a stretch with six starts in nine weeks. Koepka struggles to get up for non-majors, but the Player of the Year vote might be on the line later this summer. 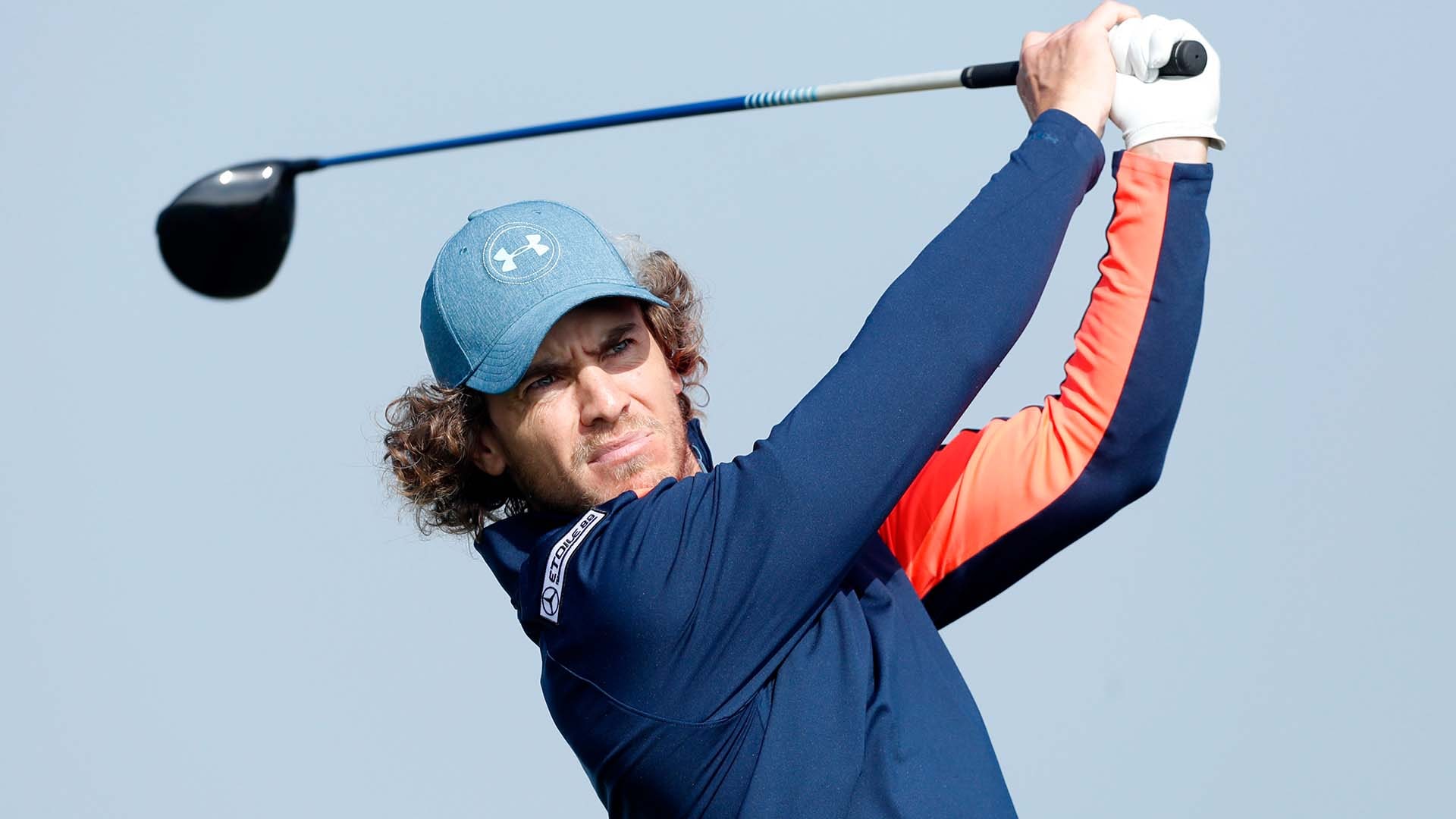 Oh, Clément Berardo, your demise brings so many questions.

Berardo, of course, is the Frenchman who was disqualified from last week’s European Challenge Tour event. The reason for his DQ still causes this scribe to chuckle: He ran out of golf balls on the 16th hole, after going 10 over par.

But questions remain, and they aren’t easily answered because A) scribes haven’t been able to get in touch with him, and B) he’s not on social media (or at least not since January 2017). Had we been able to speak with Mr. Berardo, we’d like to know:

• What happened on the 16th hole? Challenge Tour events aren’t equipped with ShotLink data, so there must have been all sorts of horror going down on that hole.

• How many balls did you start with? It’s not like 10 over is that horrific of a start.

• What did your playing partners say when you dug into the bag and came up empty? It’s hard to find another recent example of this happening in competition, so their reactions likely were hilarious.

• And have you ever felt more relatable to the average golfer? Social media was flooded with plenty “been there”s and “we are all Clément Berardo”s.

But, hey, maybe it’s better if we don’t know. The legend of Clément Berardo continues to grow.


Good Timing: Andrea Pavan. Beginning the final round of the BMW International Open four shots off the lead, Pavan shot his lowest score of the season – a bogey-free, 6-under 66 – to get into a playoff with former European Ryder Cupper Matt Fitzpatrick. Pavan birdied the third extra hole to win for the second time on the European circuit.

Good Thing the Mics Didn’t Pick Him Up: Matt Wallace. Coming down the stretch with a chance to win the BMW, Wallace instead rinsed two balls in the water on the par-5 finishing hole, taking a bogey. During his meltdown he appeared to verbally abuse his respected caddie, Dave McNeilly, but without on-course mics nearby his beef wasn’t exactly clear. We’d post some of the viewers’ comments about his behavior here, but, um, this is a family-friendly website. 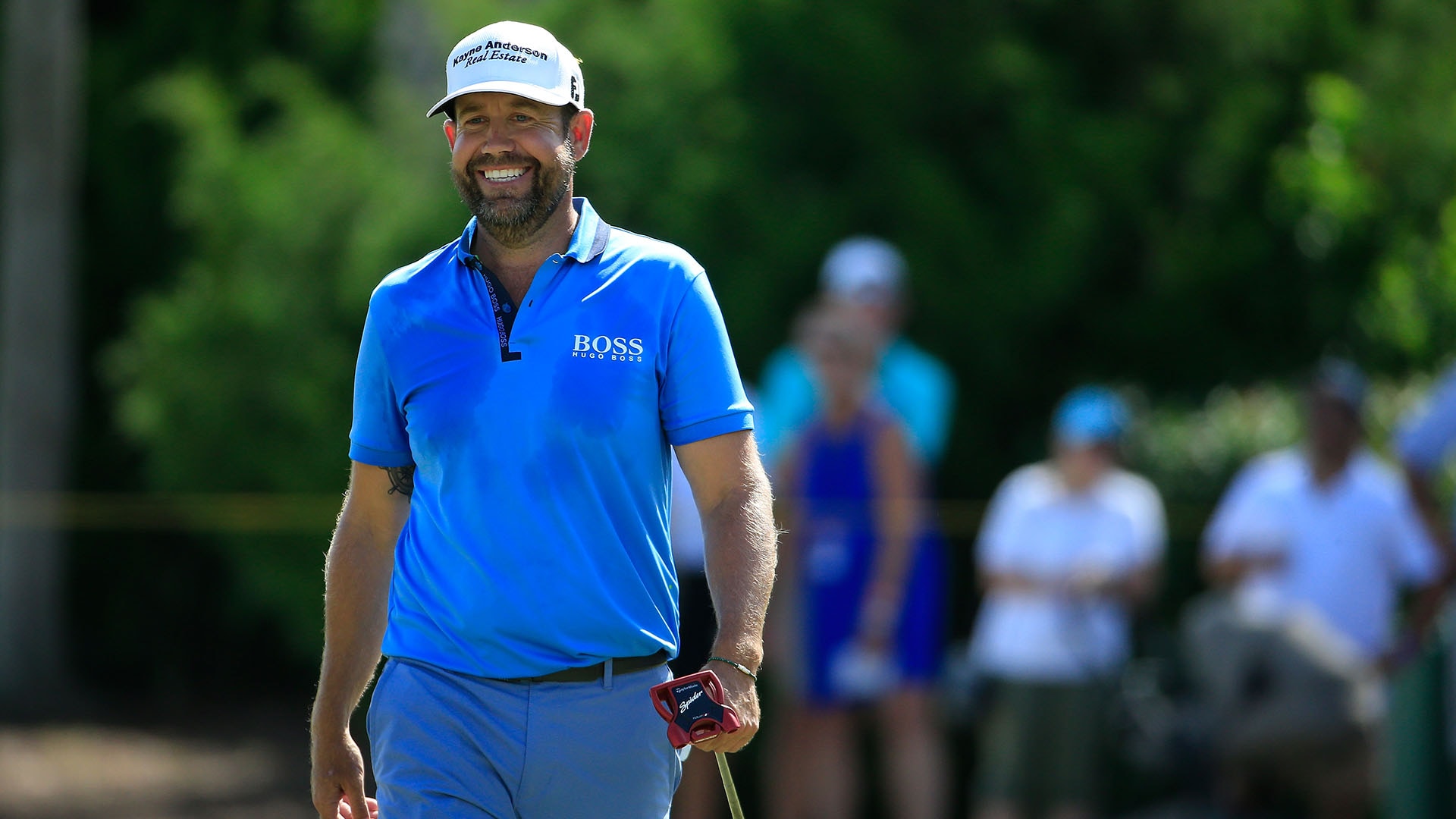 Never Count Him Out: Erik Compton. The two-time heart-transplant recipient, trying to earn his way back to the PGA Tour, chipped in on the 72nd hole to force a five-way playoff at the Wichita Open. Compton didn’t get through, but it was his best finish in a Tour-sanctioned event since 2014 as he works to get back to the big tour.

Twice as Nice: Atthaya Thitikul. The 16-year-old took home the Ladies European Tour’s Thailand Championship for the second time in three years. She won by five and won at 22 under! With no desire to play college golf in the States, it’s about that time to turn pro.

Did We Really Think This One Through?: Korn Ferry Tour. Kudos to the fine folks at Korn Ferry for believing that the PGA Tour’s developmental circuit was worthy of a 10-year deal, but can’t we come up with a better name for this? The Korn Ferry Tour? Seriously? We liked PGA Tour Next, presented by Korn Ferry, but that wasn’t going to fly with those writing the checks. Fair enough, but since Korn Ferry is a consulting firm, this is bound to turn into the KFC Tour, and that’s more than OK with us.

That’s More Like It: Joaquin Niemann. Remember when he was the can’t-miss kid last year? His T-5 at the Travelers was his first top-25 of the calendar year. He’s now back inside the top 100 in the world.

Blown Fantasy Pick of the Week: Jordan Spieth. All of those encouraging top-10s prior to the U.S. Open? Smoke and mirrors, Spieth admitted last week. His short game had carried him to those top finishes, and, as his 73-69 at the Travelers reinforced, his ball-striking is nowhere good enough to land his first title in nearly two years. Sigh. 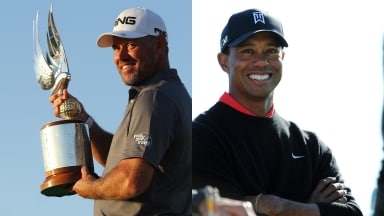 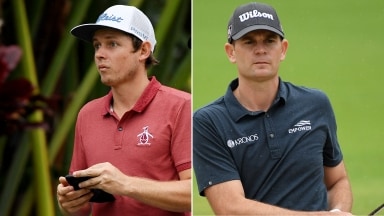 Cameron Smith breaks through on his own, Brendan Steele bobbles late, Charlie Woods gets the Tiger treatment and more in this week's Monday Scramble 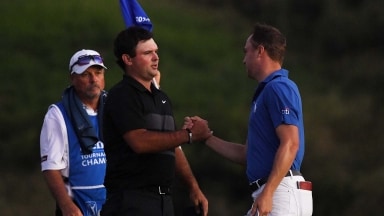 As the year's first PGA Tour event concluded Sunday, Justin Thomas was presented with the trophy while Patrick Reed was peppered with heckling.