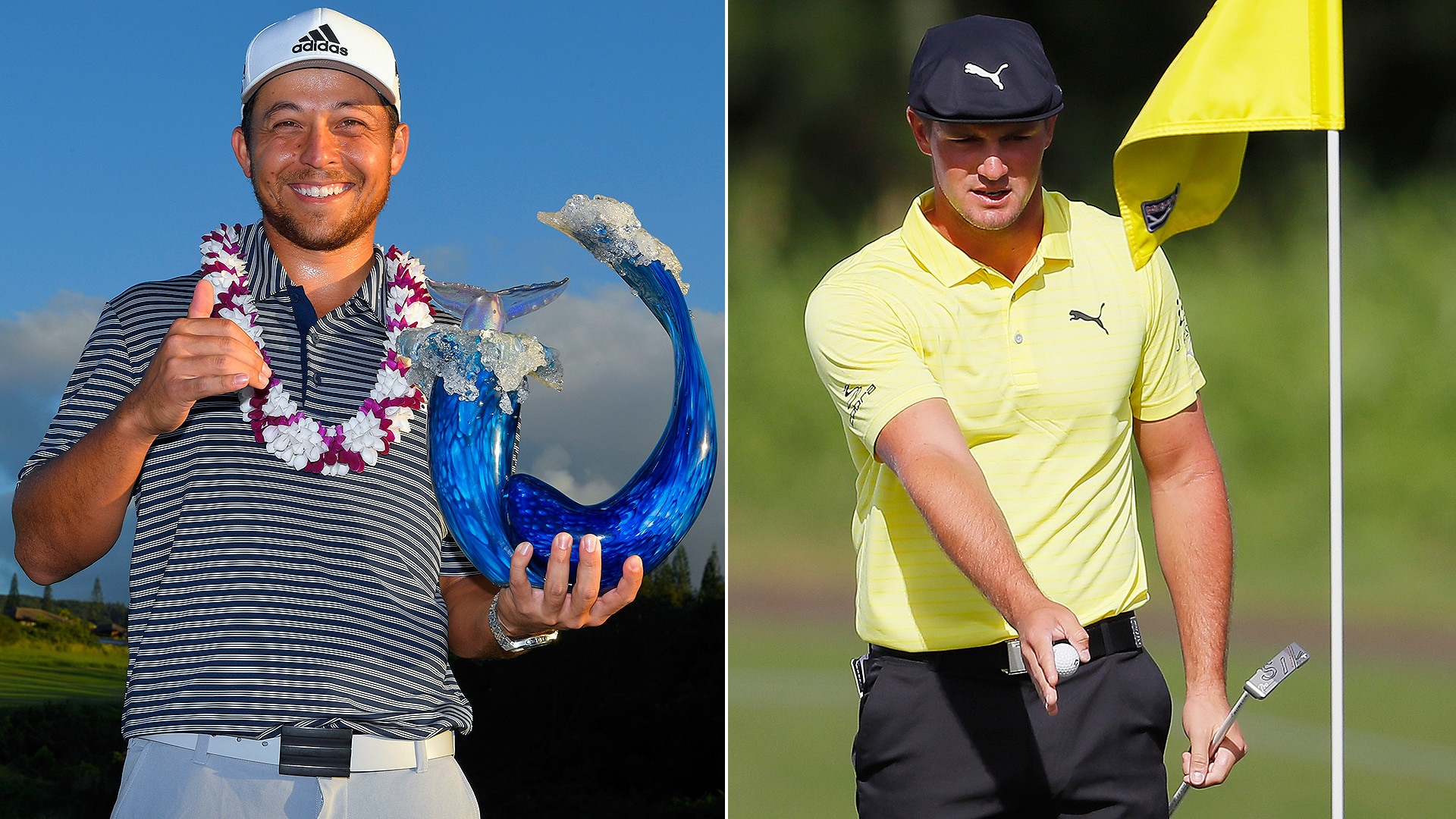 Don’t mistake Xander Schauffele’s quiet demeanor for him being overlooked or underrated.

No longer should we sell short this talent.

With a blistering, 11-under 62 in the final round at Kapalua, Schauffele overtook a game Gary Woodland to win for the second time this season, and for the fourth time in his ascendant career. The 25-year-old – a once-forgotten part of the heralded high school class of 2011 – is now all the way up to No. 6 in the world rankings, ahead of some boldfaced names like Jon Rahm and Rory McIlroy and Rickie Fowler.

Three of Schauffele’s four wins have come against limited fields – Tour Championship, WGC-HSBC Champions, Tournament of Champions – but all of those feature elite competition.

Just like the rest of the world’s best, he’s now a legitimate threat every time he tees it up.

1. And to think: Schauffele’s course-record-tying round began with a bogey. But beginning on the third hole, he played almost perfect golf to the house, including a couple of hole-outs for eagle (on Nos. 9 and 12) to chase down Woodland.

Once again Schauffele showed a flair for the dramatic. On No. 17, the toughest hole on the course, he pured an iron to 9 feet for the first birdie all day. (Woodland would soon match.) And on the home hole, Schauffele striped a 273-yard fairway wood to 12 feet, the go-ahead birdie proving to be the difference, as he finished at 23-under 269.

"There hasn't been a birdie at 17 today."@XSchauffele has a good chance to make the first.#LiveUnderPar pic.twitter.com/AkjEB0M0WR

2. What makes Schauffele tick? Because he has as many Tour wins (four) in 61 Tour starts as Rickie Fowler has managed in 218 events.

Schauffele doesn’t wow with statistics: He’s not a bomber, ranking only 34th on Tour in clubhead speed last year. He’s not particularly sharp around the greens, either, ranking 113th in that strokes-gained category. He was only 66th in the all-around statistic.

But all he does is win. That suggests that he's comfortable with his swing and impervious to final-round pressure. Thus: All four of his wins have come when trailing after 54 holes.

3. Talk about some early-season heartbreak for Woodland. Staked to a three-shot lead, he hit some unbelievably clutch shots, shot a bogey-free 68 and still lost by one. He’s now 0-for-7 converting a 54-hole stroke-play lead on Tour.

Though he waved at his final 10-footer to force a playoff, it’s hard to overstate just how much better Woodland looks on the greens – a huge credit to the work he’s done with putting guru Phil Kenyon.

Now 34, Woodland might finally have matched up a solid putting stroke with his exceptional ball-striking.

4. Rory McIlroy had another disappointing Sunday at Kapalua. It’s the sixth time since the beginning of 2016 that the former world No. 1 was first or second heading into the final round of a Tour event. He’s now 0-for-6.

He failed to capitalize on any of his mammoth drives for much of the final round, and then he showed himself out with a wayward drive into the bushes on 14, leading to a demoralizing bogey.

McIlroy was first in strokes gained: off the tee but never made a putt longer than 12 feet all week.

5. It’s easy to see how this went down: In deciding to make a new rule that allowed a player to putt with the flagstick in the hole, the USGA wanted to speed up play for recreational golfers with the belief that there’s no advantage (and it might actually be a disadvantage) to leave in the pin on the greens.

Well, Bryson DeChambeau, as he’s wont to do, challenged that notion. And on a situational basis, he’ll leave in the flag not because of any pace-of-play considerations, but because he believes he has a better chance to make the putt. He cited the coefficient of restitution (COR) of a golf ball colliding with a fiberglass flagstick, something the governing bodies admitted that they’d never studied.

Other than players leaving in the stick for tap-ins or long-range putts, the move hasn’t yet caught on (and Justin Thomas went so far as to say that he couldn't take himself seriously if he kept it in on a tournament-winning putt). But Golf Channel analyst Brandel Chamblee boldly predicted that everyone will be doing it by the end of the year.

It wouldn’t be the first time that the USGA didn’t fully think through a new rule, of course. (Here’s looking at you, anchor ban.)

6. The honeymoon period is (literally) over: Jordan Spieth is ready for 2019.

The newly married Spieth was a somewhat surprising commitment to the field list for this week’s Sony Open. He’s played at Waialae each of the past two years (pair of top-18s) because of its positioning on the back-end of the Hawaiian swing. But after two pedestrian appearances in the fall Spieth clearly wanted to get back to work and didn’t want to wait until his usual appearance at Phoenix at the end of the month.

There’ll be plenty of attention on how Spieth plays not just at the Sony but for the early portion of '19. He’s coming off his worst season as a pro.

The mysterious case of Cody Blick’s stolen clubs has been solved – well, kind of.

You remember Blick – the 25-year-old who, on the eve of the final round of Web.com Tour Q-School, had his clubs swiped from the garage of his rental house. With only a few hours before his tee time, he cobbled together a mismatched set … and then went out and shot a flawless 63 to earn his card for this year.

About a month later, those stolen clubs finally surfaced, but only after another bizarre story. Blick’s mom, Carla, received a call from a woman in Arizona who claimed that she’d bought them off a homeless man. Rather than return them for $75, or for free, this “Good Samaritan” instead turned a profit, asking for $300 from the Blick family.

Cody Blick likely won’t ever use the clubs again – save for maybe his trusty Scotty Cameron putter, which was still in good shape – but at least the sticks, once they’re disinfected, will forever have a place in his home.

Under Investigation: Lucy Li. The USGA is looking into the teen phenom’s activities after she appeared in an ad for the Apple Watch. That could be a violation of her amateur status – not that she wasn’t poised to turn pro sometime soon anyway – even though her mother reportedly denied receiving any financial compensation. Stay tuned.

Bad Omen: Rory. He’s now failed to win each of the last seven times he’s been in the final group, he never made a putt longer than 4 feet on Sunday, and his closing 72 was the worst score of anyone in the top 21. Ugh.

Shocker (Or Not): Dustin Johnson. Leave it to DJ (who admitted on the eve of the 2019 opener that he hadn’t spent much time reviewing the new rules) to become the first offender of the new year. Of course, he didn’t break a new rule – he played a wrong ball from a penalty area, a two-shot penalty that would have been enforced Dec. 31 and Jan. 1. “That won’t ever happen again,” he said. “I can promise you that.”

See, Golfers Are Athletes!: New drop rule. This looks ridiculous, but it’s probably better than the one-inch drop that was originally proposed. Why not a compromise, that players must drop the ball somewhere between shoulder and knee height?

Uhhh, Awkward: Ariya Jutanugarn's new caddie. Never mind the strangeness of the world No. 1 dumping her caddie after a successful 2018 in which she swept nearly every season-long award. The fact that she’s now working with a fellow competitor’s fiancé – in this case, ANA Inspiration champion Pernilla Lindberg’s soon-to-be husband, Daniel Taylor – seems too weird to work out. What if Jutanugarn and Lindberg are both in the final group, vying for a major?

Legend: Miguel Angel Jimenez. His 55th birthday party looks more fun than any I’ve ever had.

Thanks to everyone for all the birthday wishes on my 55th.

Can Only Get Better From Here: Bubba Watson. He finished third-to-last at Kapalua, mostly because of a MIA putter that cost him an incredible 11 1/2 strokes to the field. 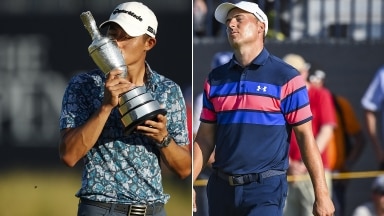 From Morikawa's superior play to Spieth's lamentation to Louis bunker blunder, we unpack it all in this week's edition. 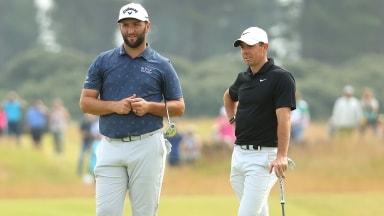 As Open Championship week begins, a look at 10 Open favorites and others on the outside at Royal St. George's. 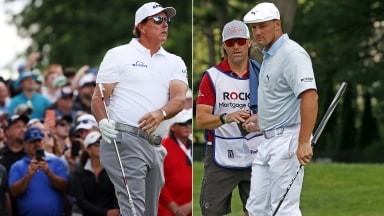 Phil Mickelson takes aim at a local reporter while Bryson DeChambeau is in the market for a new caddie.