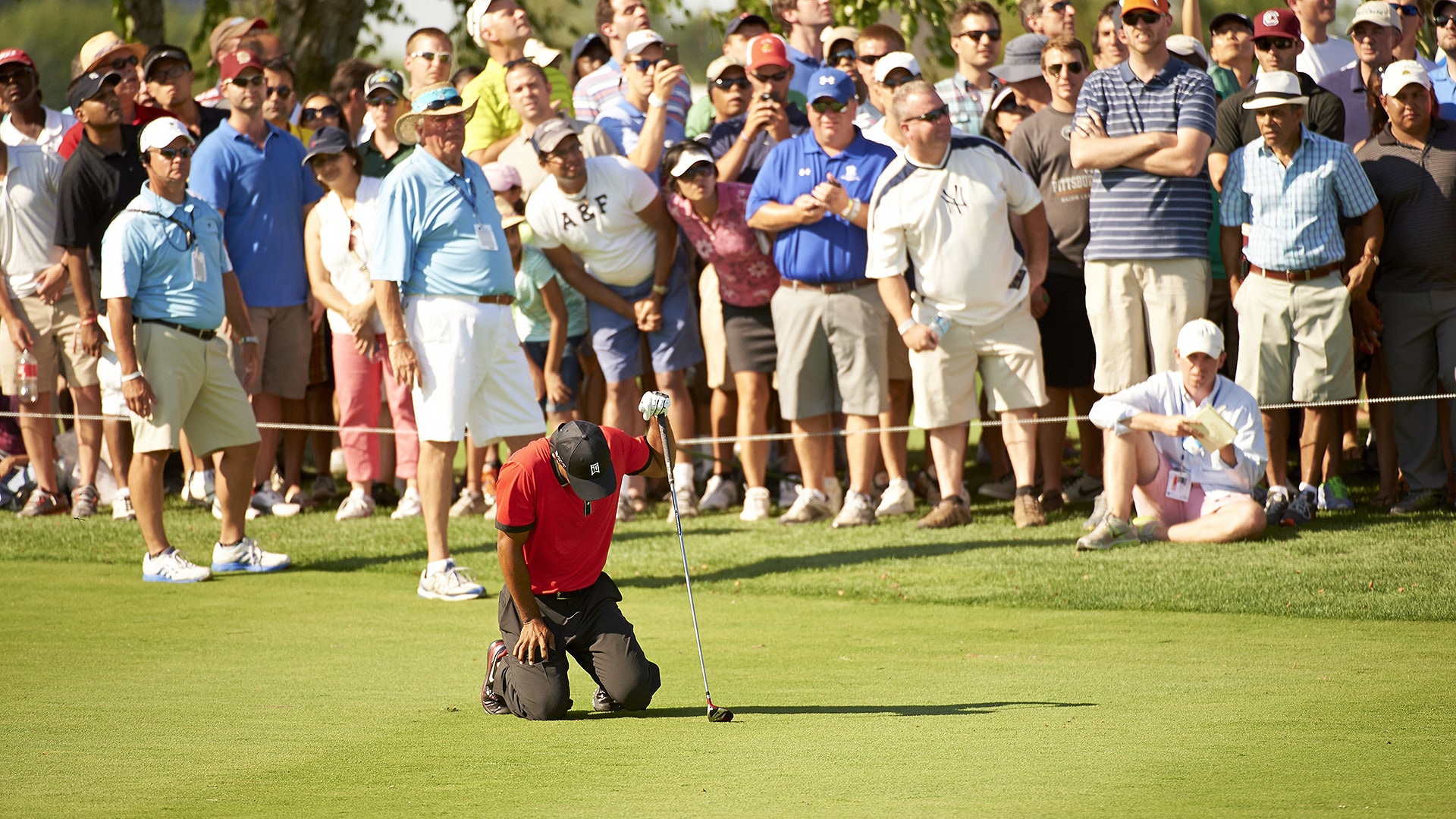 While compiling the greatest career record of his generation, Tiger Woods has been no stranger spending time on the sideline because of injury. Here's a look back at some of the ailments that have caused Woods to miss time during his career:

December 2002: Woods has surgery to remove fluid from around the anterior cruciate ligament (ACL) of his left knee. The surgery sidelines him a few weeks, but Woods wins in his first start back at the 2003 Buick Invitational at Torrey Pines.

April 2008: Shortly after a runner-up finish at the Masters, Woods has arthroscopic surgery to repair cartilage damage to his left knee. Weeks later it is revealed that the then-two-time U.S. Open champ has a pair of stress fractures in his left tibia.

June 2008: After playing through pain to claim the U.S. Open title at Torrey Pines, Woods has reconstructive surgery on the ACL in his left knee. During the surgery, further cartilage damage is repaired, and Woods does not return to action for nearly nine months, losing to Tim Clark in the second round of the WGC-Accenture Match Play Championship in February 2009 in his first start back.

May 2010: After missing the cut the week prior at the Wells Fargo Championship, Woods withdraws during the final round of The Players Championship, citing what he believes to be a potential bulging disk. 'I've been playing with a bad neck for quite a while,' he tells reporters. The injury was later diagnosed as an inflamed facet joint in his neck. Woods does not miss a start, tying for 19th in his next appearance at The Memorial Tournament the following month.

April 2011: Woods announces that he will withdraw from the upcoming Wells Fargo Championship due to a 'minor' injury to his left knee and Achilles' tendon, one that he claimed to have suffered at the Masters earlier in the month. 'This is precautionary,' Woods' agent tells reporters. 'We're not at all concerned.'

May 2011: In his first start since his most recent injury announcement, Woods abruptly withdraws from the Players Championship after nine holes, exiting early from TPC Sawgrass for the second consecutive year. 'The knee acted up and then the Achilles' followed after that,' he tells reporters. The injury is later diagnosed as both a sprain of the MCL ligament in his left knee and a strain to the left Achilles' tendon, and Woods ultimately misses three months of action, including both the U.S. Open and British Open. He ties for 37th in his return at the WGC-Bridgestone Invitational in August.

March 2012: Woods withdraws with seven holes left in his final round at the WGC-Cadillac Championship, citing an injury to his left Achilles' tendon. 'In the past, I may have tried to continue to play, but this time, I decided to do what I thought was necessary.' The injury does not sideline him long, as Woods wins just two weeks later in his first start back at the Arnold Palmer Invitational.

June 2013: After a T-32 finish at the U.S. Open, Woods announces he will miss the upcoming AT&T National due to a left elbow strain. 'I have been advised to take a few weeks off, rest and undergo treatment,' he says in a statement. It marks the third time he has missed the event because of injury in its seven-year history, and Woods confirms that he intends to return at the British Open in July.

March 2014: Woods withdraws on the 13th green in the final round of the Honda Classic, citing lower back spasms. Woods shot 5-over 40 on the front nine. Woods said after the round that it was too soon to tell his status for next week's WGC-Cadillac. Woods’ spokesman, Glenn Greenspan, said that the world No. 1 had experienced discomfort during warm-ups and that the issue was similar to what Woods experienced during last year’s Barclays, when he fell to his knees in pain during the final round en route to a runner-up finish.

April 2014: Woods announces that he will miss the Masters for the first time in his pro career. He also revealed that he recently underwent surgery for a pinched nerve in his back and that he hoped to return to the PGA Tour “sometime this summer.”

August 2014: Woods withdraws on the ninth hole of the final round of the WGC-Bridgestone Invitational, citing lower back pain. The injury stemmed from an awkward lie on the second hole that sent Woods back into a fairway bunker after impact. “Just jarred it," he said, "and it’s been spasming ever since.” This was his third tournament since returning from surgery in March, and he played his first eight holes 3 over. When asked about his prognosis for the upcoming PGA Championship, Woods said, “I don’t know. Just trying to get out of here.”

February 2015: In his second start of the year, Woods walks off after completing 11 holes of his opening round at the Farmers Insurance Open, citing a back injury. Woods explained that the injury stemmed from enduring multiple fog delays before the start of his round, and that he was unable to keep his glutes "activated." "My glutes are just shutting off," he said. "Then they don't activate and then, hence, it goes into my lower back."

September 2015: After showing signs of improvement in his final start of the season at the Wyndham Championship, Woods on Sept. 18 announces that he has undergone a second microdisectomy surgery two days prior to remove a disc fragment that was pinching his nerve. "This is certainly disappointing, but I'm a fighter," Woods said in a statement. "I've been told I can make a full recovery, and I have no doubt that I will." Woods says the surgery will cause him to miss the Frys.com Open, Bridgestone America's Golf Cup and his own Hero World Challenge. He further states he hopes to return "early in 2016."

October 2015: Woods announces on his website that he has undergone a "successful" procedure as a follow-up to his latest back surgery. Intended to "relieve discomfort," the procedure was performed in Park City, Utah, by the same neurosurgeon who performed Woods' microdiscectomy surgery on Sept. 16. "It's one of those things that had to be done," Woods says. "I have an outstanding team of doctors, and I'll be back as soon as I can." There is still no timetable for his return to the PGA Tour.

April 2016: Woods, who hasn't played competitively since Fall 2015 surgeries, announces that he will miss the Masters for the second time in three years. "After assessing the present condition of my back, and consulting with my medical team, I've decided it's prudent to miss this year's Masters," he said in a statement on his website. "I've been hitting balls and training daily, but I'm not physically ready. I've said all along that this time I need to be cautious and do what's best for my long-term health and career. Unfortunately, playing Augusta next week wouldn't be the right decision. I'm absolutely making progress, and I'm really happy with how far I've come, but I still have no timetable to return to competitive golf."

September 2016: Woods announces in a statement that he "hopes" to return to competition at the Safeway Open, Oct. 13-16, the 2016-17 PGA Tour season-opener. The statement said he "intends" to also play the Turkish Airlines Open in November and his Hero World Challenge in December. “My rehabilitation is to the point where I’m comfortbale making plans, but I still have work to do,” he said in the statement released on his website. “Whether I can play depends on my continued progress and recovery. My hope is to have my game ready to go.”

October 2016: After committing to the Safeway Open three days prior, Tiger Woods officially withdraws on Oct. 10. He says in a statement, “My health is good, and I feel strong, but my game is vulnerable and not where it needs to be.” He also said he will not compete in November's Turkish Airlines Open, but hopes to return at the Hero World Challenge in December.

February 2017: Woods withdraws from the Omega Dubai Desert Classic before the start of his second round. Woods' agent, Mark Steinberg, cites back spasms as the reason. Woods said he was feeling no pain following his first-round 77.

February 2017: Woods announces that he will not compete in the Genesis Open nor the Honda Classic, two of four events in a five-week stretch in which he planned to play to start the year.

March 2017: Woods misses the Arnold Palmer Invitational as he continues to recover from back spasms.

March 2017: Woods says he is not "tournament ready" and misses the Masters for the third time in four years.

April 2017: Woods announces on his website that he has undergone "successful back surgery to alleviate ongoing pain in his back and leg." The announcement explains that "Woods' bottom lower-back disc severely narrowed, causing sciatica and severe back and leg pain. ... The surgery entailed removing the damaged disc and re-elevating the collapsed disc space to normal levels. This allows the one vertebrae to heal to the other. The goal is to relieve the pressure on the nerve and to give the nerve the best chance of healing. The operation was performed by Dr. Richard Guyer of the Center for Disc Replacement at the Texas Back Institute."

May 2017: Woods is arrested in Jupiter, Fla., on suspicion of driving under the influence. Woods later says alcohol was not involved and he had "an unexpected reaction to prescribed medications."

July 2017: Woods tweets that he "recently completed an out of state private intensive program," as he continues to seek professional help following his arrest for DUI on May 29. "I will continue to tackle this going forward with my doctors, family and friends," the statement continues. "I am so very thankful for all the support I've received."

October 28, 2017: Woods pleads guilty to reckless driving and enters a diversion program. He was sentenced to a year of probation and ordered to pay a $250 fine and court costs.

October 30, 2017: Woods announces he will make his first competitive start in nine months at the Hero World Challenge.

March 4, 2019: After playing 2018 injury-free and competing in three events in 2019, Woods announced his withdrawal from the Arnold Palmer Invitational. Woods, an eight-time winner of the event, cited a neck strain in a tweet: "Unfortunately due to a neck strain that I’ve had for a few weeks, I'm forced to withdraw from the API. I’ve been receiving treatment, but it hasn't improved enough to play. My lower back is fine, and I have no long-term concerns."

August 9, 2019: Following a first-round 75, Woods withdrew from The Northern Trust prior to his second-round tee time, citing a strained oblique. Woods walked through a limited pro-am round on Wednesday, telling reporters that he was suffering from stiffness. On Friday, he released a statement, which read in part: "I went for treatment early Friday morning, but unfortunately I'm still unable to compete."

August 27, 2019: Woods announces on Twitter that he has undergone arthroscopic surgery to repair minor ligament damage in his left knee. He said he expects to make a "full recovery" and still be able to play a scheduled event in Japan in late-October.