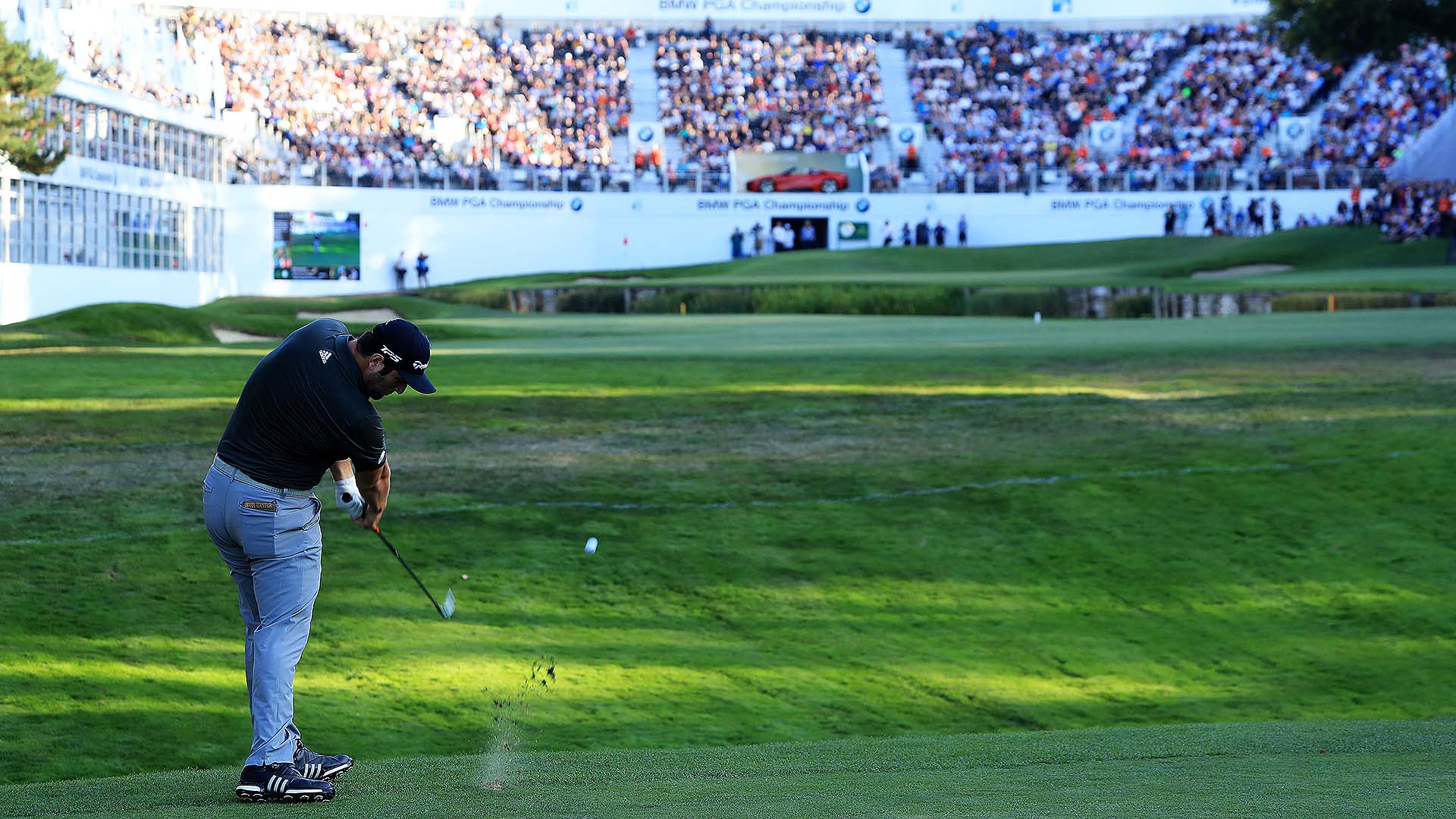 VIRGINIA WATER, England – It’s 1,131 yards of claustrophobic chaos that annually makes any round on Wentworth’s West Course a study in diminishing returns.

It’s a rarity in golf, at least golf at the professional level, to finish a round with back-to-back par 5s – and conventional wisdom suggests the birdie opportunities would create one-way traffic. But as three days of trial and error have proven, Wentworth’s finish is not a pushover.

For every Ross Fisher, who holed his second shot from 225 yards on the 18th hole for an albatross on Saturday at the BMW PGA Championship, there’s a Jon Rahm, who was cruising along with a two-stroke lead when he reached the penultimate tee.

“Besides the last two holes, actually, besides basically the last seven strokes, really, the rest of the round was almost bulletproof,” Rahm explained.

Actually, it took the Spaniard, who was 5 under for the day through 16 holes, 11 strokes to play the last two frames, but his point is valid. It all started with a wild drive into the trees left of the 17th fairway that led to a bogey and ended with a 10-footer for par on the 18th hole.

“I mean, I'm not even asking for birdies,” Rahm pleaded. “There's two pars, and having a one-shot lead, but still, it's a lot of golf to come.”

Instead, Rahm will start the final day at the European Tour’s flagship event tied with Danny Willett, who rebounded from a bogey at No. 15 with a birdie at the 17th hole for a share of the lead.

But then, neither Rahm nor Willett had as much of a rollercoaster ride on the finishing tandem as Justin Rose. He eagled the 17th hole to move to 13 under and into third place just behind the front-runners. “Seventeen was awesome. Felt like I was really in the tournament,” the Englishman said.

In many ways what happened next is a microcosm of Rose’s round, with a bogey at the last to drop him a field goal off the lead.

“I thought I did everything right on 18, too. It's frustrating,” Rose lamented. “That green is so severe. It's kind of why I didn't go for it yesterday and I was in between clubs and I was a little in-between clubs today and I thought the pin on the left, if I did miss right it wasn't the end of the world.”

What should, at least for professionals, be a golden opportunity to make up ground late in a round is in fact one of the most challenging finishes on the European Tour and one of the most unique finales in golf. No regular stop on the PGA Tour finishes with back-to-back par 5s.

“Those par 5s, you can make up a lot of ground or it can bite you in the butt,” said Billy Horschel, who is playing the BMW PGA for the first time this week. “I've seen guys make doubles on 17 and 18, and some guys make eagle, eagle or birdie, eagle. It allows a great opportunity where you are coming in Sunday to either make up shots or possibly lose a lot of ground.”

There are those like Fisher, who is 4 under par on Nos. 17 and 18 for the week, who make the most of the opportunity; and then there are those like Rory McIlroy, who is 2 over on the two finishers after closing his round on Thursday double bogey-bogey.

“I hung in there. I made some good pars when I may have put myself out of position. And then I took advantage of most of the par 5s which was good,” said McIlroy who finally got on the board at Nos. 17 and 18 with a birdie at the 17th hole on Saturday.

These wild swings of fortune are one of the reasons why Wentworth annually produces some of the European Tour’s most drama-filled finishes. Last year it was Francesco Molinari who needed to get up and down for par from the fringe on No. 18 for victory. Even more impressive was the 2014 championship, when McIlroy rallied from seven strokes back with a closing 66 that included birdies at Nos. 17 and 18 for a one-stroke victory.

The Northern Irishman, who is currently nine shots off the lead, will need an even more magical finish this time.

“I'm a realist and I know I won from seven back a few years ago, and I feel like that's something that happens maybe once in your career. Maybe try to make it twice,” he said.

At least a half dozen others are probably imagining a similar finish on Sunday at Wentworth where the chamber of commerce weather is poised to become more of a “proper” English summer. But it won’t be the weather that dictates the outcome, it will be the West Course’s 1,131 yards of closing chaos.