With all of Ireland behind him, Lowry looks to hoist claret jug at The Open 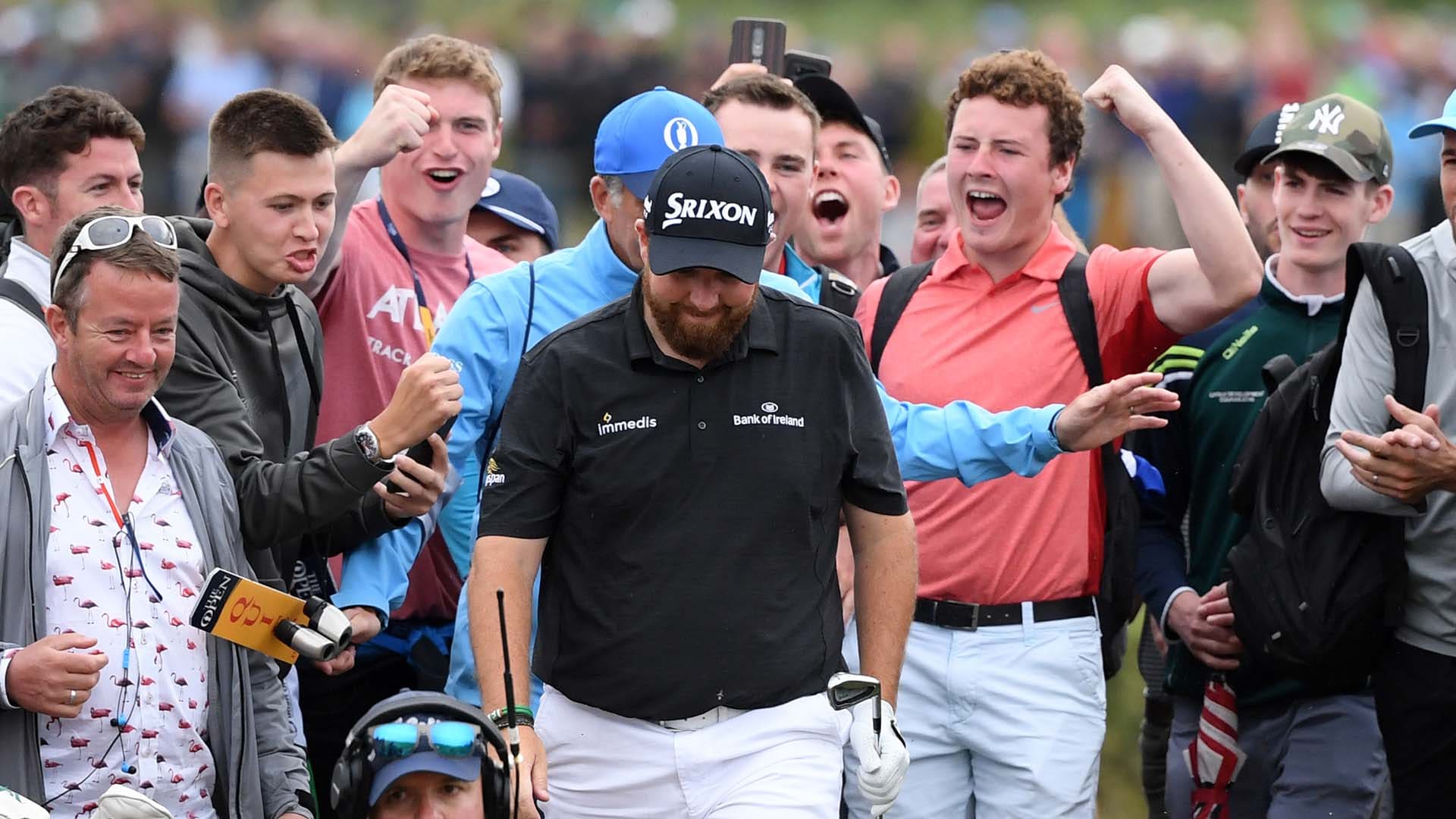 PORTRUSH, Northern Ireland – Before they cleverly inserted his name into songs like “Sweet Caroline” and “Winter Wonderland,” before they formed a tunnel to each tee and screamed at the top of their lungs after another birdie, the Irish fans here at Royal Portrush showed they were willing to go all-in for Shane Lowry.

Definitive proof came on the 14th hole Saturday. Lowry was cruising along, one shot clear of Tommy Fleetwood, when he roped a drive short and left of the fairway. His ball came screaming into a sparse group of spectators, eventually plunking Owen Sweeney, a 37-year-old Irishman, on the back of the neck. Lowry’s ball could have wound up in knee-high weeds, or worse, but instead it caromed off Sweeney’s neck and rolled into a clean lie, on the well-worn path among the dunes.

“It was sunburned already,” Sweeney said, showing off his new welt above his collar line, “but now it’s even worse.”

That errant drive was the only miscue Lowry would make over the final 90 minutes. From the dunes he hit a soaring draw into a safe area short of the green, then pitched on and saved par. He birdied the next three holes to cap an 8-under 63, busting open the tournament and sending the packed crowd into delirium.

Sweeney got a signed glove for his troubles (“Sorry!!”), and even more of a rooting interest.

“I hope he wins now,” Sweeney said. “That improves my story.”

Lowry could have quite a story to tell, too, with the streets of Portrush about to overflow with Guinness. Through three rounds Lowry has set The Open scoring record with a 16-under 197 total. After sleeping on the halfway lead, he fired the low round of the tournament to push his lead to four shots over Fleetwood and six ahead of J.B. Holmes, with inclement weather in the forecast for the final round.

Had Martin, a Belfast native, ever experienced euphoria like that?

Said Lowry, who grew up in Mullingar, about four hours away: “Honestly, that’s the most incredible day I’ve ever had on the golf course.”

So incredible, in fact, that Lowry stopped Martin on 17 and told him to soak up the moment, just in case. “We might never have a day like this again on the golf course, so let’s enjoy this next half hour,” he said.

The scene, of course, could be even more unhinged Sunday, but the 32-year-old is wise enough now to know that a four-shot lead is no guarantee. After all, before the USGA bumbled its way through a rules controversy at Oakmont, it was Lowry who was staked to a four-shot lead through 54 holes at the 2016 U.S. Open. He closed with 76 and tied for second.

Apparently, that collapse was on his mind even before Lowry met with the assembled media here Saturday night. Scanning the leaderboard with Martin on the 18th green, Lowry joked, “At least I won’t have to answer any questions about Oakmont – I’m four ahead going into the final round of a major.”

Carrying the bag back to the caddie area, Martin, too, brought up that fateful Sunday, unprompted. “The good thing is nobody’s going to ask about Oakmont,” he said, laughing. “He’s a different player (now). You can see how different he is.”

In the press tent, Lowry fielded two questions before he was asked to recall that experience. “I was waiting for that,” he laughed, before going on to explain that he learned to hang in until the end, that he’s a changed person, that a major title wouldn’t mean as much to him now.

That final reply, he felt the need to clarify.

“I’m not saying that it doesn’t mean everything – it’s my career,” he said. “But I’ve got certain things in my life that make it different. I’ve got a family now. No matter what I shoot tomorrow, my family will be waiting for me.”

Earlier this year, when Lowry took the 54-hole lead in Abu Dhabi, Lowry told his wife, Wendy, to make sure that, win or lose, she and their 2-year-old daughter Iris were waiting for him by the final green. If he won, he wanted them there to celebrate. And if he lost, they’d need to be there to console him. (He won, kick-starting his resurgent season.)

It figures to be a long, restless night for Lowry, and he expects as much. From the beginning he hasn’t shied away from the uncomfortable position of contending (and now holding a big lead) on home turf.

“There’s no point bottling it up,” he said. “Because if I bottle it up, I’m going to become too anxious or nervous.” He flashed back to a tournament years ago at Valderrama, where late in the round, feeling the pressure, he confided to his then-caddie Neil Manchip: “I’m absolutely sh**ing myself.”

“That’s kind of the way it is,” Lowry said. “I like to talk about things. I’m not going to be sitting in the house in a corner trying not to think about the day ahead. I’ll go to bed thinking about holding the claret jug tomorrow evening. It’s only natural, isn’t it? We’re human. We’re not robots. We can’t not think about things.”

The claret jug is the only thing on the minds of the Irish fans who patiently waited as Lowry went through his post-round media stops late Saturday. They stood 20 deep on the hillside and outside a white-picket fence, one fan climbing onto his pal’s shoulders and whirling his sweater above his head as they chanted, “Ole, Ole, Ole!”

They sang and danced all the way to the exit, back toward town, with one of their own now 18 holes away from The Open.